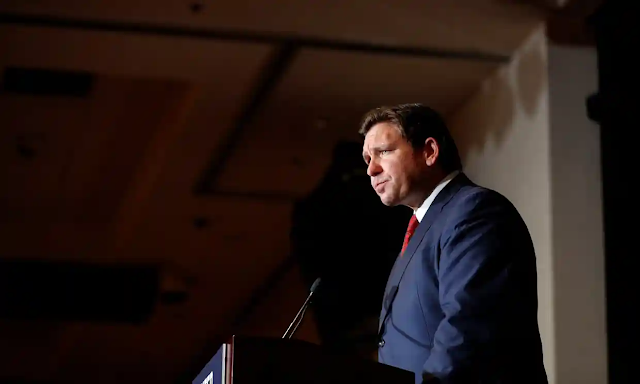 "I’ve been watching the Florida governor, Ron DeSantis, for some time. Last Tuesday I tweeted: “Just wondering if ‘DeSantis’ is now officially a synonym for ‘fascist’.”

I was surprised at the outrage my little tweet provoked in rightwing media.

The Washington Examiner, for example, called me an “ultra-leftwing elitist” who wrote an “insulting slur”, which is “what leftwing ideologues do when they discuss Republican politicians who pose any threat to the existence of their political ideology … Anyone the Democrats don’t like or disagree with is a fascist.”

This was among the kindest responses.

After a half-century in and around politics, I’ve got a thick skin. But the size of the blowback on my little tweet makes me think I struck a nerve.

DeSantis is the most likely rival to Trump for the Republican nomination in 2024. The Harvard and Yale educated DeSantis (what do they teach at Harvard and Yale?) has been called “Trump with a brain”.

DeSantis is the nation’s consummate culture warrior. Lately he has been campaigning on behalf of Republican election-deniers around the country, including gubernatorial candidate Doug Mastriano in Pennsylvania and US Senate candidate JD Vance in Ohio.

In Florida, discussions of sexual orientation and gender identity are now barred in schools. Math textbooks have been rejected for what officials call “indoctrination”. Claiming tenured professors in Florida’s public universities were “indoctrinating” students, DeSantis spearheaded a law requiring them to be reviewed every five years.

Teachers are limited in what they can teach about racism and other tragic aspects of American history. DeSantis has got personally involved in local school board races, endorsing and campaigning for 30 board candidates who agree with him (so far, 20 have won outright, five are going to runoffs).

Abortions are banned after 15 weeks. (DeSantis recently suspended an elected prosecutor who said he would refuse to enforce the anti-abortion law.)

A new state office has been created to investigate “election crimes”.

Disney (Florida’s largest employer) has been stripped of the ability to govern itself in retaliation for the company’s opposition to the crackdown on LGBTQ+ conversations with schoolchildren.

Florida’s congressional map has been redrawn to give Republicans an even bigger advantage.

DeSantis also spews culture-war rhetoric. “We are not going to surrender to woke,” he said last Tuesday. “Florida is the state where woke goes to die.”

He describes an America under assault by leftwing elites, who “want to delegitimize our founding institutions”.

He calls the state of Florida a “citadel of freedom” and says his job as governor is to fight critical race theory, “Faucian dystopia”, uncontrolled immigration, big tech, “leftwing oligarchs”, “Soros-funded prosecutors”, transgender athletes and the “corporate media”.

He charges – using a standard racist dog whistle – that “we’re not letting Florida cities burn down … In Florida, you’re not going to get a slap on the wrist. You are getting the inside of a jail cell.”

So, is it useful to characterize DeSantis’s combination of homophobia, transphobia, racism and misogyny, along with his efforts to control the public schools and universities and to intimidate the private sector (eg, Disney), as redolent of fascism?

America’s mainstream media is by now comfortable talking and writing about “authoritarianism”. Maybe it should also begin using the term “fascism”, where appropriate.

Authoritarianism implies the absence of democracy, a dictatorship. Fascism – from the Latin fasces, denoting a tightly bound bundle of wooden rods typically including a protruding axe blade, adopted by Benito Mussolini in the 1930s to symbolize his total power – is different.

Fascism also includes hatred of “them” (people considered different by race or religion, or outside the mainstream, or who were born abroad), control over what people learn and what books they are allowed to read, control over what had been independent government units (school boards, medical boards, universities and so on), control over women and the most intimate and difficult decisions they’ll ever make, and demands that the private sector support the regime.

Perhaps my “just wondering” tweet about DeSantis hit the nerve of the fascism now taking root in the Republican party?

Or is DeSantis’s own nascent presidential campaign behind the outsized reaction to my tweet?

After all, if you’re seeking a presidential nomination in today’s GOP, there’s nothing like an accusation of fascism to rally Trump supporters. It might be a particularly useful strategy if your primary opponent in 2024 will be Trump.

Maybe US mainstream media should begin using the term ‘fascism’ | Robert Reich | The Guardian
Posted by John H Armwood II at 10:44 AM