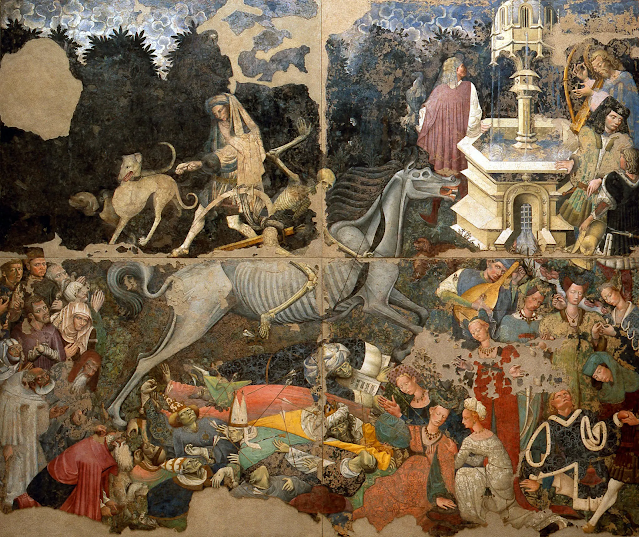 To hear more audio stories from publishers like The New York Times, download Audm for iPhone or Android.

When will the Covid-19 pandemic end? And how?

According to historians, pandemics typically have two types of endings: the medical, which occurs when the incidence and death rates plummet, and the social, when the epidemic of fear about the disease wanes.

“When people ask, ‘When will this end?,’ they are asking about the social ending,” said Dr. Jeremy Greene, a historian of medicine at Johns Hopkins.

In other words, an end can occur not because a disease has been vanquished but because people grow tired of panic mode and learn to live with a disease. Allan Brandt, a Harvard historian, said something similar was happening with Covid-19: “As we have seen in the debate about opening the economy, many questions about the so-called end are determined not by medical and public health data but by sociopolitical processes.”

Endings “are very, very messy,” said Dora Vargha, a historian at the University of Exeter. “Looking back, we have a weak narrative. For whom does the epidemic end, and who gets to say?”

In the path of fear

An epidemic of fear can occur even without an epidemic of illness. Dr. Susan Murray, of the Royal College of Surgeons in Dublin, saw that firsthand in 2014 when she was a fellow at a rural hospital in Ireland.

In the preceding months, more than 11,000 people in West Africa had died from Ebola, a terrifying viral disease that was highly infectious and often fatal. The epidemic seemed to be waning, and no cases had occurred in Ireland, but the public fear was palpable.

“On the street and on the wards, people are anxious,” Dr. Murray recalled recently in an article in The New England Journal of Medicine. “Having the wrong color skin is enough to earn you the side-eye from your fellow passengers on the bus or train. Cough once, and you will find them shuffling away from you.”

The Dublin hospital workers were warned to prepare for the worst. They were terrified, and worried that they lacked protective equipment. When a young man arrived in the emergency room from a country with Ebola patients, no one wanted to go near him; nurses hid, and doctors threatened to leave the hospital.

Dr. Murray alone dared treat him, she wrote, but his cancer was so advanced that all she could offer was comfort care. A few days later, tests confirmed that the man did not have Ebola; he died an hour later. Three days afterward, the World Health Organization declared the Ebola epidemic over.

Dr. Murray wrote: “If we are not prepared to fight fear and ignorance as actively and as thoughtfully as we fight any other virus, it is possible that fear can do terrible harm to vulnerable people, even in places that never see a single case of infection during an outbreak. And a fear epidemic can have far worse consequences when complicated by issues of race, privilege, and language.”

Bubonic plague has struck several times in the past 2,000 years, killing millions of people and altering the course of history. Each epidemic amplified the fear that came with the next outbreak.

The disease is caused by a strain of bacteria, Yersinia pestis, that lives on fleas that live on rats. But bubonic plague, which became known as the Black Death, also can be passed from infected person to infected person through respiratory droplets, so it cannot be eradicated simply by killing rats.

Historians describe three great waves of plague, said Mary Fissell, a historian at Johns Hopkins: the Plague of Justinian, in the sixth century; the medieval epidemic, in the 14th century; and a pandemic that struck in the late 19th and early 20th centuries.

The medieval pandemic began in 1331 in China. The illness, along with a civil war that was raging at the time, killed half the population of China. From there, the plague moved along trade routes to Europe, North Africa and the Middle East. In the years between 1347 and 1351, it killed at least a third of the European population. Half of the population of Siena, Italy, died.

“It is impossible for the human tongue to recount the awful truth,” wrote the 14th-century chronicler Agnolo di Tura. “Indeed, one who did not see such horribleness can be called blessed.” The infected, he wrote, “swell beneath the armpits and in their groins, and fall over while talking.” The dead were buried in pits, in piles.

In Florence, wrote Giovanni Boccaccio, “No more respect was accorded to dead people than would nowadays be accorded to dead goats.” Some hid in their homes. Others refused to accept the threat. Their way of coping, Boccaccio wrote, was to “drink heavily, enjoy life to the full, go round singing and merrymaking, and gratify all of one’s cravings when the opportunity emerged, and shrug the whole thing off as one enormous joke.”

That pandemic ended, but the plague recurred. One of the worst outbreaks began in China in 1855 and spread worldwide, killing more than 12 million in India alone. Health authorities in Bombay burned whole neighborhoods trying to rid them of the plague. “Nobody knew if it made a difference,” the Yale historian Frank Snowden said.

It is not clear what made the bubonic plague die down. Some scholars have argued that cold weather killed the disease-carrying fleas, but that would not have interrupted the spread by the respiratory route, Dr. Snowden noted.

Or perhaps it was a change in the rats. By the 19th century, the plague was being carried not by black rats but by brown rats, which are stronger and more vicious and more likely to live apart from humans.

“You certainly wouldn’t want one for a pet,” Dr. Snowden said.

Another hypothesis is that the bacterium evolved to be less deadly. Or maybe actions by humans, such as the burning of villages, helped quell the epidemic.

The plague never really went away. In the United States, infections are endemic among prairie dogs in the Southwest and can be transmitted to people. Dr. Snowden said that one of his friends became infected after a stay at a hotel in New Mexico. The previous occupant of his room had a dog, which had fleas that carried the microbe.

Such cases are rare, and can now be successfully treated with antibiotics, but any report of a case of the plague stirs up fear.

One disease that actually ended

Among the diseases to have achieved a medical end is smallpox. But it is exceptional for several reasons: There is an effective vaccine, which gives lifelong protection; the virus, Variola major, has no animal host, so eliminating the disease in humans meant total elimination; and its symptoms are so unusual that infection is obvious, allowing for effective quarantines and contact tracing.

But while it still raged, smallpox was horrific. Epidemic after epidemic swept the world, for at least 3,000 years. Individuals infected with the virus developed a fever, then a rash that turned into pus-filled spots, which became encrusted and fell off, leaving scars. The disease killed three out of 10 of its victims, often after immense suffering.

The Omicron variant. The highly transmissible Covid strain is surging around the world. Research suggests many non-mRNA Covid vaccines offer almost no defense against becoming infected, though the Pfizer and Moderna boosters, which are mRNA-based, likely provide additional protection against serious illness.

In 1633, an epidemic among Native Americans “disrupted all the native communities in the northeast and certainly facilitated English settlement in Massachusetts,” said Harvard historian Dr. David S. Jones. William Bradford, leader of the Plymouth colony, wrote an account of the disease in Native Americans, saying the broken pustules would effectively glue a patient’s skin to the mat he lay on, only to be torn off. Bradford wrote: “When they turn them, a whole side will flay off at once as it were, and they will be all of a gore blood, most fearful to behold.”

The last person to contract smallpox naturally was Ali Maow Maalin, a hospital cook in Somalia, in 1977. He recovered, only to die of malaria in 2013.

The 1918 flu is held up today as the example of the ravages of a pandemic and the value of quarantines and social distancing. Before it ended, the flu killed 50 million to 100 million people worldwide. It preyed on young to middle-aged adults — orphaning children, depriving families of breadwinners, killing troops in the midst of World War I.

In the autumn of 1918, Victor Vaughan, a prominent doctor, was dispatched to Camp Devens near Boston to report on a flu that was raging there. He saw “hundreds of stalwart young men in the uniform of their country, coming into the wards of the hospital in groups of ten or more,” he wrote. “They are placed on the cots until every bed is full, yet others crowd in. Their faces soon wear a bluish cast, a distressing cough brings up blood stained sputum. In the morning the dead bodies are stacked up in the morgue like cord wood.”

The virus, he wrote, “demonstrated the inferiority of human inventions in the destruction of human life.”

After sweeping through the world, that flu faded away, evolving into a variant of the more benign flu that comes around every year.

“Maybe it was like a fire that, having burned the available and easily accessible wood, burns down,” Dr. Snowden said.

It ended socially, too. World War I was over; people were ready for a fresh start, a new era, and eager to put the nightmare of disease and war behind them. Until recently, the 1918 flu was largely forgotten.

Other flu pandemics followed, none so bad but all nonetheless sobering. In the Hong Kong flu of 1968, one million people died worldwide, including 100,000 in the United States, mostly people older than 65. That virus still circulates as a seasonal flu, and its initial path of destruction — and the fear that went with it — is rarely recalled.

Will that happen with Covid-19?

One possibility, historians say, is that the coronavirus pandemic could end socially before it ends medically. People may grow so tired of the restrictions that they declare the pandemic over, even as the virus continues to smolder in the population and before a vaccine or effective treatment is found.

“I think there is this sort of social psychological issue of exhaustion and frustration,” the Yale historian Naomi Rogers said. “We may be in a moment when people are just saying: ‘That’s enough. I deserve to be able to return to my regular life.’”

It is happening already; in some states, governors have lifted restrictions, allowing hair salons, nail salons and gyms to reopen, in defiance of warnings by public health officials that such steps are premature. As the economic catastrophe wreaked by the lockdowns grows, more and more people may be ready to say “enough.”

“There is this sort of conflict now,” Dr. Rogers said. Public health officials have a medical end in sight, but some members of the public see a social end.

“Who gets to claim the end?” Dr. Rogers said. “If you push back against the notion of its ending, what are you pushing back against? What are you claiming when you say, ‘No, it is not ending.’”

The challenge, Dr. Brandt said, is that there will be no sudden victory. Trying to define the end of the epidemic “will be a long and difficult process.”