The Blue Wall of Silence Is Crumbling Around Derek Chauvin

"For one of the first times in memory, police are testifying against one of their own. But will it lead to an actual conviction? 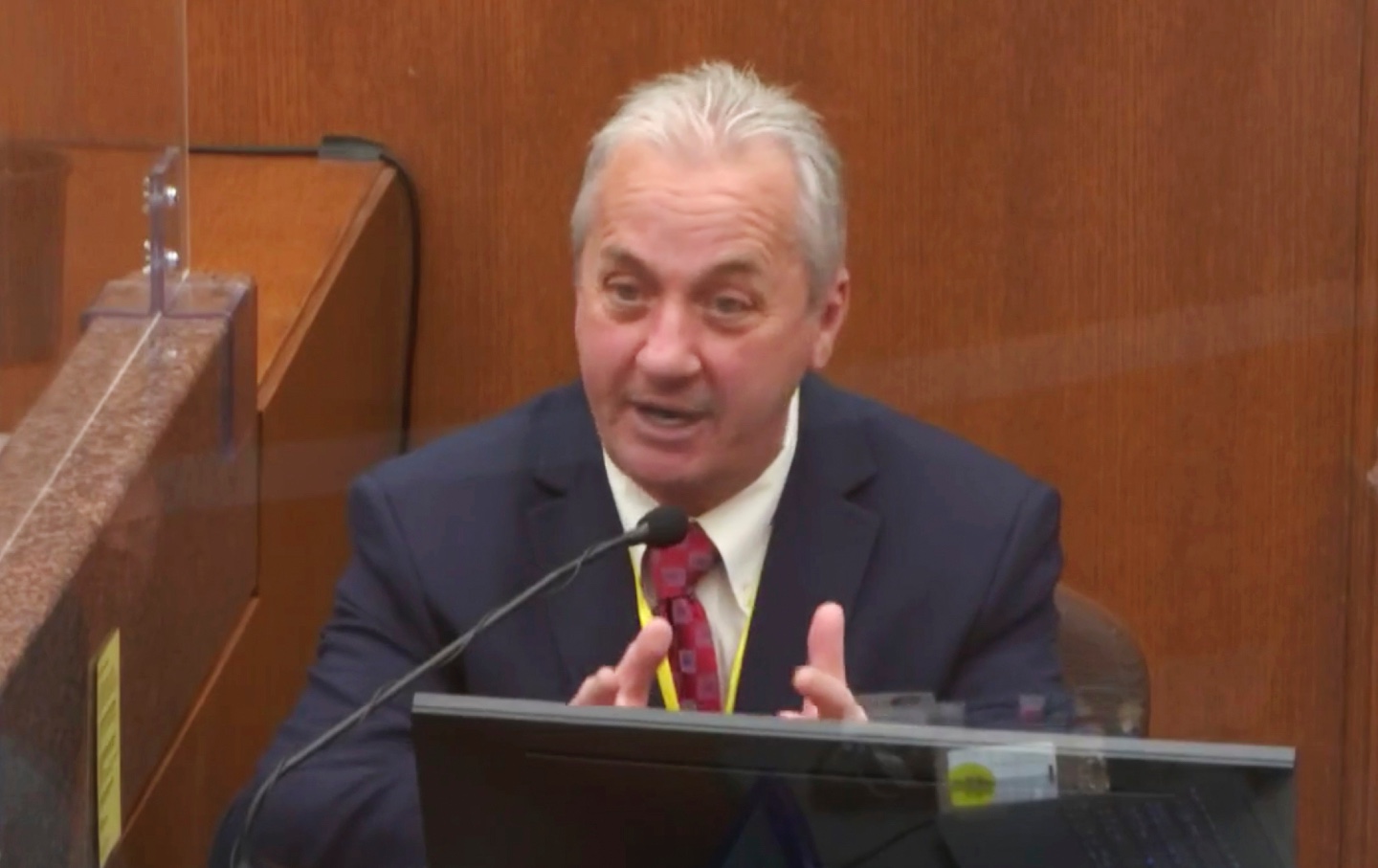 In this image from video, Lt. Richard Zimmerman of the Minneapolis Police Department testifies in the trial of former Minneapolis police officer Derek Chauvin. (Court TV via AP, Pool)

I can’t offer an assessment of how the Derek Chauvin trial is going. I saw Chauvin murder George Floyd with my own eyes, and no amount of white cop-speak can gaslight me out of that reality. I can’t pretend to get inside the headspace of somebody who has an “open mind” about whether choking a Black person to death on the street is a crime. I can’t really assess the effectiveness of the prosecution’s ongoing case, or grade the defense’s strategy, because I’m not the audience for any of this. For me, catching snippets of this trial has been like catching snippets of an Easter homily: I’m sure this is for somebody, but it ain’t for me.

But I can spot what is different about this trial from all the other ones in which cops are tried for killing Black people. On Friday, Richard Zimmerman, Chauvin’s former supervisor and the current police lieutenant, testified for the prosecution and called Chauvin’s actions “totally unnecessary.” On Monday, the Minneapolis Police Chief, Medaria Arradondo, testified for the prosecution against Chauvin, and said that Chauvin “absolutely” violated police protocols. Over the course of this week, the prosecution will put additional cops on the stand and offer evidence from police training videos, which will all show that Chauvin acted outside standard police procedure during his homicidal detainment of George Floyd.

That’s new. Police officers don’t usually testify against fellow police officers in a murder trial or anything else. I’ve never even heard of a police chief testifying against an officer. That cross-police solidarity is called the “Blue Wall of Silence,” which is kind of like some of the omerta vows we’ve seen popularized by other crime syndicates. That fact that the Blue Wall is crumbling in the face of Floyd’s murder and the months and months of protests against police violence is significant.

The effectiveness of this cop testimony will be studied, regardless of the outcome in the trial. Essentially, there are two operating theories as to why cops so regularly get away with the murder of Black people. One theory, I’ll call it “mine,” is that this is a racist country and anytime you roll the dice with up to twelve random white people, you are bound to find at least one inveterate racist who can hang a jury. Under my theory, all that is required to convict police officers is for defense attorneys to simply fail to pick the right racists for their jury.

Under the other theory, I’ll dub it the “Kumbaya” theory, it’s not that people are racist, it’s that they really, really trust the fine men and women of law enforcement. They presume that the officer who stands accused of murder was just trying to “protect” (white) people like themselves. When that presumption is backed up by other officers who testify for the defense (or don’t testify at all), the public takes that as an indication that their cops, whom they love, did their best in a tough situation.

If the Kumbaya theory of police accountability is correct—that is, if cop acquittals are merely a matter of a jury’s trust in cop decency—this testimony should be game over for Chauvin. A case in which law enforcement tells the jury that a cop wasn’t acting like law enforcement should end the debate about whether Chauvin’s actions were legal. The chief of police testified that, in his opinion, Chauvin used excessive force against Floyd. What more evidence does any reasonable person need?

But if I’m right, we’re not dealing with rational people, we’re dealing with a jury that the defense was able to seed with irrational people, who will support any decision that winds up with fewer Black people in this world. The prosecution has put up testimony from the doctor who treated Floyd and pronounced him dead. They’ve shared emotional testimony from Floyd’s family. They have also highlighted the video of Chauvin committing the murder. If all of that isn’t enough for these people, I can’t imagine how the words of a police chief, who happens to be Black, are going to be “the thing” that makes them see reason.

I hope to be wrong, at least in this particular instance of police violence. And I believe that proving people like me wrong is one reason there are so many officers willing to testify against Chauvin. In a way, breaking from Chauvin now allows the cops to maintain their “few bad apples” theory of police brutality against Black people. By focusing on the individual bad acts of Chauvin, the entire system of police brutality gets a pass.

It should be lost on nobody that the number of Minneapolis police officers willing to testify against Chauvin at trial stands in stark contrast to the number of Minneapolis police officers who were willing to stop Chauvin from killing a man in broad daylight. Those who remember the video of Floyd’s murder will remember Chauvin kneeling on Floyd’s neck, with his hands impassively in his pockets. But people should also remember the other police officers milling about, being fully aware of what Chauvin was doing but doing nothing to stop him. Those officers, Chauvin’s accomplices, were not charged by prosecutors.

Still, whether the motive is cynical or not, Chauvin has been stripped of one of the principal advantages afforded to cops charged with murder: the support of other cops. If that is, in fact, enough to convict him, it will retroactively show just how important the Blue Wall has been in securing acquittals for other officers charged with crime.

If all that is needed is for a police chief to say “this was wrong” to get a jury to convict, then it’s fair to ask every future police chief to testify when police violence results in the death of unarmed people in their precincts. If uniformed outrage is key to police accountability, then we must ask why there isn’t more of it, and we must start appointing police chiefs and police commissioners based on their willingness to hold “their own” men and women accountable.

I’d like to think that finding a few “good apples,” like Chief Arradondo, is what we need to achieve justice. But I don’t put a lot of faith in the power of old hymnals. My gut tells me that the verdict in this case has been locked in since the jury was seated, and this entire trial has been for show. I just can’t tell how the show ends. The police testimony at least makes it appear different from the other episodes of “How The Cops Get Away With Murder.”

The Blue Wall of Silence Is Crumbling Around Derek Chauvin | The Nation
Posted by John H Armwood II at 1:34 PM