Kemp finalized the bill just over an hour after it cleared the General Assembly, leaving no doubt about its fate amid public pressure against voting restrictions.

Republican lawmakers pushed the legislation through both the House and Senate over the objections of Democratic lawmakers. The legislation passed along party lines in both chambers, with votes of 34-20 in the Senate and 100-75 in the House.

Protesters outside the Capitol said the bill will disenfranchise voters, calling it “Jim Crow 2.0.” State Rep. Park Cannon, D-Atlanta, was arrested by state troopers after knocking on Kemp’s office door to try to witness the bill signing. The governor briefly interrupted his prepared remarks as Cannon was forcibly removed from the building by officers.

The election overhaul in a state with a history of voting rights struggles came after the first victory in Georgia by a Democrat in a presidential election since 1992. Then in January, Democrats won two runoffs for the U.S. Senate, giving them control of the chamber. 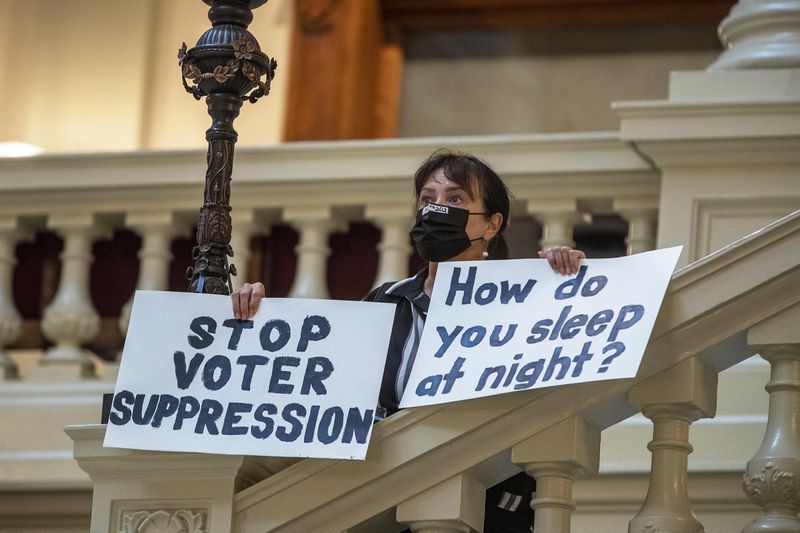 Opponents of the bill said it will create obstacles for voting, especially on absentee ballots and in runoffs.

In addition, there will be as little as one week of early voting before runoffs, down from the current three-week early voting period. The bill calls for runoffs to be held four weeks after general elections, leaving little time for early voting.

“It is unbelievable that there are still some people trying to stop people from voting today. You are changing the rules, cutting the voting hours, and making it more difficult for people to vote,” said state Rep. Erica Thomas, a Democrat from Austell. “Too many people fought, bled and died for our right to vote.”

Republican lawmakers said the measure will increase trust in election outcomes following unsubstantiated claims of voter fraud in the 2020 presidential contest. Recounts both by hand and machine showed that Democrat Joe Biden defeated Republican Donald Trump by about 12,000 votes.

“Our goal is to ensure that voters in Georgia have confidence in the elections process,” said state Sen. Max Burns, a Republican from Sylvania. “This is a solid step in the right direction to provide voter integrity in Georgia.”

Many Republican state legislators expressed sympathy for suspicions about the presidential race, though election officials say there’s no evidence of widespread fraud. Republican Secretary of State Brad Raffensperger has said the November election was successful and accurate.

“What I’m worried about is how un-American this whole initiative is,” Biden said. “It’s sick.”

Besides requiring ID numbers to vote absentee, the bill mandates that ballot drop boxes be located inside early voting locations, limiting their usefulness. Drop boxes won’t be available to voters in the last four days of an election, when it’s often too late to mail them in time.

Weekend voting before general elections will be expanded, with mandatory voting hours on two Saturdays statewide. Counties will retain the option to allow early voting on two Sundays. But early voting before runoffs will be reduced to a minimum of just one week before election day.

The bill also will allow the State Election Board to take over county election boards that it deems need intervention. Skeptics say that will allow Republican officials to decide which ballots count in majority Democratic areas, such as Fulton County.

In addition, the legislation sets a deadline to request absentee ballots 11 days before election day and disqualifies provisional ballots cast in the wrong precinct. Distributing food or drinks to voters waiting in line is also prohibited.

“One of the things we looked at is a system that’s broke,” said state Rep. Alan Powell, a Republican from Hartwell. “We have a system that needs to be revamped.”

“I’m here because the work never ends,” said Marla Cureton, a Roswell activist. “It’s a reminder to Democrats around the country that this is going to be an ongoing fight.”

Representatives from both parties said the legislation is about political power in advance of the 2022 election, which could include a rematch of the 2018 contest for governor. Kemp will face opposition, potentially from Democrat Stacey Abrams.

“This is a partisan power grab in response to the electoral defeat in the 2020 election cycle,” said state Rep. Carolyn Hugley, a Democrat from Columbus. “We will not stand idly by and let Jim Crow 2.0 roll back our new Georgia.”

State Rep. Barry Fleming, a Republican from Harlem, said the bill will fix issues in prior elections, but it will also be used as fodder for future political campaigns by Democrats seeking to motivate their voters.

“What we’re trying to do is address the problems in 2018 and 2020,” Flemingsaid. He urged representatives to vote in favor of the bill to “make voting better in Georgia and also make voting in Georgia more accessible.”

The final version of the bill didn’t include a proposal to end no-excuse absentee voting, which has allowed any Georgia voter to cast an absentee ballot since 2005. Lawmakers backed off an effort to restrict absentee ballots to voters who are at least 65 years old, have a physical disability or are out of town. More than one-quarter of the 5 million voters in November’s election used absentee ballots.

Voting rights organizations have said they will challenge the legislation in court.