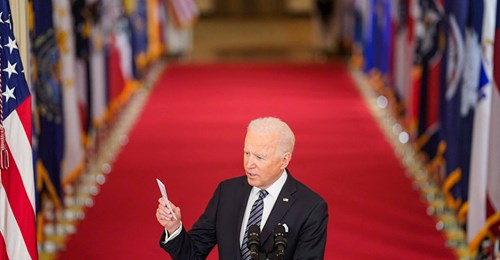 "President Biden on Thursday directed states to ensure that all adults are eligible for a coronavirus vaccine by May 1, and he declared a goal of allowing small celebrations on July 4, setting up significant landmarks in the effort to return to normalcy after the devastating pandemic.

Speaking from the East Room of the White House in his first prime-time address, Biden sought to hit hopeful notes as he ticked through a series of new actions he intends to take to combat the virus in the spring and summer. His new initiatives include creating a “find a vaccination” website and allowing dentists, veterinarians and other health professionals to administer doses.

Biden’s speech, clocking in at 24 minutes, served as an inflection point on the 51st day of his presidency. The president had spent his first few weeks carefully managing expectations for recovery and frequently blaming the Trump administration for many of its early challenges, criticisms he renewed indirectly on Thursday night. But Biden took greater ownership of the pandemic battle — and exposed himself to a potential backlash if he does not deliver.

A few moments later, Biden added a caveat: “A lot can happen. Conditions can change. The scientists have made clear that things may get worse again as new variants of the virus spread.”

Still, Biden’s statement made it clear the goal is that no later than May 1, any adult — regardless of age, occupation or health status — will be able to sign up to receive the vaccine.

Much of what Biden announced Thursday focused on picking up the pace of vaccinating Americans. Instead of his initial goal of 1 million vaccinations a day, which some experts had said was overly modest, Biden said the new goal would be maintaining the current pace of 2 million a day.

About 10 percent of the country, or 33.2 million people, is fully vaccinated, according to a Washington Post tally. Many people have struggled to navigate overlapping guidelines for who is eligible and deal with overwhelmed sign-up websites, leading to anxiety and uncertainty about when they can get a shot.

The administration will provide technical support to state and local websites, officials said. Biden also plans to double the number of pharmacies participating in a federal vaccination program and the number of federally run mass inoculation centers.

The announcement of a date for universal adult vaccine eligibility is a beacon in the year-old battle against the pandemic, though in some ways Biden was declaring a turning point that has been in the works for some time. Some states may announce full eligibility before May 1, if they conclude that their websites and phone lines can handle the traffic.

The goal of a limited return to normalcy by July 4 was crafted to give Biden a potentially potent symbol, allowing him to frame the moment as an American victory.

The new deadlines reflect the growing pressure facing Biden faces to offer the public tangible moments they can look forward to, and his tone represented a small but notable shift in careful balance he has maintained between optimism and caution.

Still, aides were wary of overpromising that a full recovery is around the corner. “This depends on the progress that we make on vaccinations,” said a senior administration official, who spoke about the speech ahead of time on the condition of anonymity.

Among the elements that could complicate the country’s return to more normal activity is the emergence of viral variants. The administration on Thursday touted money in the recently enacted pandemic relief bill dedicated to genomic sequencing to track variations.

Some Republicans, led by former president Donald Trump, offer a different narrative, arguing that Trump was responsible for getting the vaccine developed so quickly and initiating the mechanisms for distributing it. Biden, they say, has overreached by keeping much of the country shut down, failed to reopen schools more swiftly, and passed a massive and unnecessary spending bill.

On Thursday, GOP leaders sought to play down Biden’s role in the strides the country has made in fighting the virus, taking him to task for passing the relief bill without a single Republican vote.

“President Biden and this Democratic government inherited a tide that had already begun to turn toward decisive victory,” said Senate Minority Leader Mitch McConnell (R-Ky.) in a Senate floor speech, sidestepping the widespread dysfunction and disinformation that characterized Trump’s handling of the virus.

McConnell add that “2021 is set to be an historic comeback year. Not because of far-left legislation that was passed after the tide had already turned, but because of the resilience of the American people.”

Still, Republicans may face an uphill battle, as polls show significant public support for Biden, the relief bill and the national vaccination effort.

Biden, who has faced intensifying criticism from Republicans over the pace of schools reopenings, will distribute $130 billion from the relief bill to schools this month through the Education Department.

His administration will also expand coronavirus testing in schools and host a summit this month on safe operations.

Biden did not mention Trump by name Thursday night, though he said that the pandemic initially “spread unchecked” due to “denials for days, weeks, then months.”

Biden also used many of the same personal touches he deployed on the campaign trail, as he ran on becoming a comforter-in-chief who routinely opened up about the death of his son and spoke of overcoming grief. At one point, he pulled a paper from his pocket on which he said he keeps the number of Americans who have lost their lives to the virus.

The speech was solemn at times, as Biden memorialized the more than 529,000 Americans who have died of covid-19, the disease caused by the novel coronavirus, and reflected on the tens of millions of others who have struggled under the weight of lost jobs, closed schools, hospitalizations and isolation from loved ones over the past 12 months.

“There is hope and light and better days ahead — if we all do our part,” Biden said. “A year ago, no one could have imagined what we are going through. But now we are coming through it.”

Biden also urged people not to let up in the precautions they have taken, such as wearing face masks and practicing social distancing, even as the number of new infections and deaths has declined. That posture put him at sharp odds with some Republican governors, who have recently moved to shed restrictions more quickly, despite the advice of public health experts to continue exercising vigilance.

Hours before his speech, Biden signed the sweeping $1.9 trillion pandemic relief bill that will deliver historic levels of aid to ­lower-income Americans, who have borne the brunt of the pandemic. Sitting at the Resolute Desk in the Oval Office, Biden said the “historic legislation is about rebuilding the backbone of this country. He added, “I’m going to have a lot more to say about that.”

Biden, Vice President Harris and their allies will soon begin fanning out across the country to promote the bill, an effort that is likely to double as tour to declare the administration’s success in making the vaccine available.

Next week, they will travel to swing areas that were key to Biden’s win last November, such as suburban Philadelphia, Atlanta, Las Vegas and Denver.

The bill will trigger $1,400 stimulus payments to many Americans, some of whom will receive their check as soon as this weekend, White House press secretary Jen Psaki said Thursday. The legislation also provides makes massive investments to assist state and local governments, boosting unemployment benefits and distributing coronavirus vaccine doses.

Democrats have hailed the bill as a triumph for helping struggling Americans. The bill received no Republican votes in Congress, highlighting the head winds Biden is facing in delivering on his promise during the campaign to foster bipartisanship in the post-Trump era.

Biden made an indirect reference to bipartisanship in Thursday’s address. “My fervent hope for the country is that after all we’ve been through, we will come together,” he said. And he returned to one of his core campaign themes — unifying Americans. “Beating this virus and getting back to normal depends on national unity,” he said.

The president also decried the divisions that have erupted as the pandemic has taken root, saying, “Too often we’ve turned against one another. A mask is the easiest thing to do to save lives. Sometimes it divides us,” he said. He denounced states turning against each other and “vicious hate crimes against Asian Americans.”

As the Biden presidency nears the two-month mark, its accomplishments and setbacks have come into sharp focus. Almost immediately after taking office, Biden started signing a raft of executive orders rolling back Trump administration moves on immigration, climate and women’s rights.

He has focused most of his efforts on passing the relief bill. White House officials were upbeat this week as legislation neared the finish line, feeling that he had etched a monumental political and policy achievement.

The legislative sausage-making revealed not just interparty divides but intraparty fissures that will probably be difficult to navigate in future fights. A 50-50 Senate gives Biden a razor-thin margin for error for passing bills along party lines using a limited maneuver known as budget reconciliation."

Biden directs states to make all adults eligible for vaccine by May 1 - The Washington Post
Posted by John H Armwood II at 6:34 AM