Will Americans ever forgive Trump for his heartless lack of compassion? | Francine Prose | Opinion | The Guardian 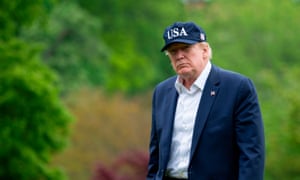 "To exist at this moment is to navigate (or try to fend off) the flood of grief that threatens to submerge even our rare, buoyant moments. We mourn the death of friends and relatives, the absence of human contact and the everyday pleasures we once took for granted. We can’t stop thinking about the tens of thousands of families facing hunger, bankruptcy and homelessness even as they struggle to endure the loss of someone they dearly loved.


What’s striking, if not surprising, is that this deluge of sorrow has run dry at the door to the Oval Office.
One’s heart goes out to the reporters who have sifted through the Donald Trump’s press briefings on the current pandemic – hour after hour of bombast, self-promotion, vitriol, lies and recklessly unscientific speculation – for any evidence of sympathy for those who are in pain. It’s hardly a shock to learn that our president’s expressions of care and compassion have occupied a total of less than five minutes, out of all that time.
After all, a man who mocked a disabled journalist and boasted about grabbing women wasn’t elected for the depths of his kindness and the purity of his moral conscience. And it seems unrealistically optimistic to have hoped that the extremity of this crisis should have inspired, in our leader, a deep and essential change of heart.
Arguably, few politicians seek (and are elected to) office out of an excess of compassion. Even those who respond to catastrophe in more appropriately “human” ways – George W Bush mourning the victims of 9/11, Obama tearing up at the site of the Sandy Hook school shooting – have been parochial in their sympathies; there was little ceremonial grieving for the innocent child-casualties of our bombing and drone strikes in the Middle East.
And yet we can’t help thinking how much less worried we would be if a humane, competent, well-informed adult was making the decisions that affect us all. Though we’ve learned that Franklin Delano Roosevelt turned away refugees from Hitler’s Europe, we can still imagine how comforting it was, for those who lived through the Great Depression, hearing his radio speeches: absorbing their message of reassurance and hope, his determination to comprehend and mitigate the sufferings of our nation.
Trump’s enraged, self-infatuated maunderings are the opposite of Roosevelt’s calm resolve. Yet ultimately our president’s failure of empathy is less disturbing than the ways in which it appears to resonate with his supporters. He and his allies have framed our response to the crisis in terms of partisan politics, to imply (incorrectly, as the polls suggest) that tough conservatives are eager to get back to work sooner than scaredy-cat, stay-at-home progressives.
The flag-waving, gun-toting, defiantly unmasked protesters storming the capitol buildings in Michigan and Wisconsin would seem to support that view. This, too, is a situation that could have been defused by a president who projected sympathy, who persuaded his listeners, as Roosevelt did, that the pain of those who have lost jobs and businesses is shared by us all. Instead we see Trump’s efforts to stoke rage and bitterness because he suspects that it might help solidify his base.
It may be that the deepening polarization in our country – the suspicion, grievance and rage that the president is spouting and encouraging – is less political than spiritual. These divides go deeper than how we vote; they express our core beliefs about our responsibility to those with whom we share this brief span on this damaged planet. As Slate editor Tom Scocca posted on Twitter: “Conservatives have by now been conditioned to believe that thinking about other people ‘s needs or interests in any way is tyranny by definition,” a sentiment echoed by Emily Raboteau in the Huffington Post: “I can’t debate someone into caring about what happens to our fellow human beings.”
This idea that empathy and altruism are expressions of weakness and naivety is nothing new; it’s the foundation of novelist Ayn Rand’s Objectivism, and it received a major boost during the Reagan-Bush years, when “trickle-down” economics did little to stem the growing problem of homelessness. But it’s never seemed so virulent as it does today, perhaps because it has never been so openly advocated – so blatantly demonstrated – by our president. It’s hard to think of anything more corrupt or corrupting than to boast about one’s success when (as I write this) more than 60,000 Americans have died of Covid-19. It’s hard to imagine anything more grotesque than using the pandemic as an excuse to further the ongoing campaign to separate families and exclude asylum seekers and other immigrants.
What’s most frightening to me is that the lack of empathy – the selfishness, the resentment, the hope that others will suffer even more than we are suffering – is itself a kind of virus: contagious, dangerous, possibly even lethal. I’ve heard people say that the Wisconsin and Michigan protesters – shouting shoulder to shoulder, refusing to observe the simple rules of social distancing – won’t learn how profoundly Trump has betrayed them until they themselves contract the virus that they have been encouraged to downplay. I’ve even heard it said how unfair it is that our overweight, out-of-shape politicians – too vain to wear a mask, flouting scientific advice and the dictates of common sense – have proved immune to the disease that has felled so many decent, generous people.
But such statements echo the absence of compassion that Trump, by tweet and by example, is encouraging us to feel. It’s become another thing to resist. I don’t want to wish that anyone will learn that particular hard lesson, in that particularly hard way: not the governors opening their states for business before it’s safe, not the demonstrators on the state capitol steps, not our president. Despite my own anger, frustration and fear, I still can’t bring myself to claim suffering as a success."
Will Americans ever forgive Trump for his heartless lack of compassion? | Francine Prose | Opinion | The Guardian
Posted by John H Armwood II at 5:04 PM