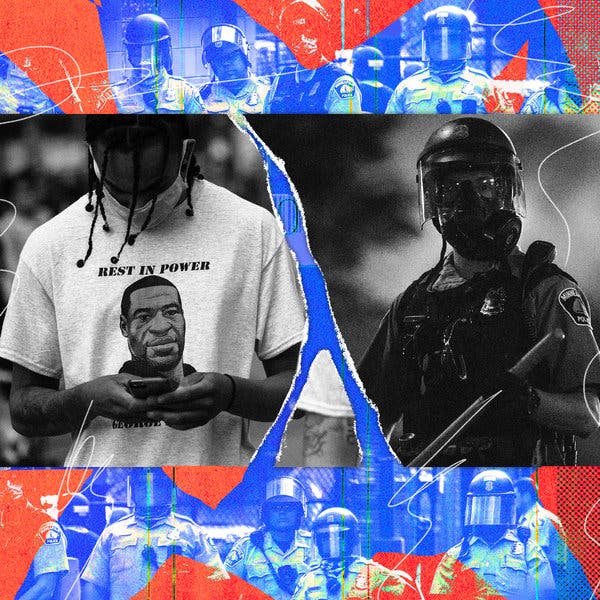 "Videos of state-sponsored killings have been going viral for years. Little has changed.

Mr. Bokat-Lindell is a staff editor.

This article is part of the Debatable newsletter. You can sign up here to receive it Tuesdays and Thursdays.

Six years ago this August, Michael Brown, a black 18-year-old who had just graduated from high school, was shot and killed by a police officer in Ferguson, Mo. His death, along with those of so many others, set off a national debate about how to reduce police violence. But the deaths of George Floyd in Minneapolis this week and of Breonna Taylor in March are a painful reminder of just how little has changed:

Why has there been so little progress, and what needs to happen for these numbers to go down? Here’s what people are saying.

Many proposed solutions to curb police violence have not proved effective, according to Samuel Sinyangwe, a data scientist and policy analyst at Campaign Zero. After the uproar over Mr. Brown’s killing, hope mounted that technology could fix a broken system: Wouldn’t requiring officers to wear cameras enable more accountability? By 2015, 95 percent of large police departments reported they were using body cameras or had committed to doing so soon. But research has now shown that they have almost no effect on officer behavior.

[Related: “A journalist explains the promises and failures of high-tech policing”]

Some common strategies for reducing racial bias also don’t seem to work. In the United States, black people are three times as likely to be killed by the police than white people. Some criminal justice reform groups have argued that diversifying police forces might close this gap. But Jennifer Cobbina, a professor of criminal justice at Michigan State University, has found that it probably doesn’t: The police force in Baltimore, for example, is mostly made up of officers of color, but the department was still found in 2016 to have engaged in a pattern of unconstitutional, racially biased policing.

The jury on whether implicit bias training works is also still out. As Jack Glaser, a Berkeley psychologist who researches racial stereotyping, told Scientific American, “You can raise people’s awareness about the possibility that implicit bias exists and affects them, but that’s not the same thing as stopping it from influencing their judgments.”

What policies could work?

Although the number of police killings hasn’t fallen significantly on a national level since 2013, things have improved in some parts of the country, especially in cities. How did they do it? In particular, tighter restrictions on when and how police officers can use force — putting someone in a chokehold, for example, or shooting at a moving vehicle — appear to substantially reduce killings. After making such reforms in 2016, the San Francisco Police Department saw a 30 percent decline in the use of force by 2019, and, as of last May, had gone more than a year without a single officer shooting.

Equipping officers to recognize and handle cases involving mental illness is another front for reform. The San Antonio police have received national attention for developing their own mental health unit, and every officer is required to complete 40 hours of training in crisis intervention — far more than the national average of six.

[Related: “When Mental-Health Experts, Not Police, Are the First Responders”]

Criminal justice scholars have also called for an end to the Pentagon’s practice of donating military equipment to local law enforcement agencies, which research suggests leads to more violence against officers and higher numbers of fatal shootings by the police. In 2015, the Obama administration restricted the distribution of tanks, grenade launchers and weaponized aircraft, but the Trump administration reversed that decision in 2017. Even so, there have been local measures to demilitarize police forces, most notably in Montana.

[Related: “Why does the Minneapolis police department look like a military unit?”]

American police departments could also take some cues from their counterparts in other countries, the former Burlington, Vt., police chief Brandon del Pozo has argued in The Times. American police officers fatally shoot about three people per day, which comes close to the yearly totals of other wealthy nations. Much of that discrepancy may have to do with the unique prevalence of guns in the United States: “Where there’s a lot of civilians that own guns, fatal police shootings happen more often,” according to David Hemenway, a professor at Harvard’s T.H. Chan School of Public Health.

Mr. del Pozo said that the extraordinary number of guns in the United States makes it impossible for officers here to go unarmed, as they do in Britain and Iceland. But he contended that officers could use their guns less: In Canada, for example, the police are armed, but the per capita rate of police shootings is one-seventh the American rate, which some credit to police training programs that prioritize de-escalation over confrontation.

“Training officers to act as if their weapons are insurance policies, rather than persuasive devices, will transform the nation’s police work,” Mr. del Pozo wrote. “Every American will be made safer by police officers whose first instinct is to communicate with the people they encounter and whose success lies in getting the psychology of persuasion right.”

Rethinking the role of the police

To understand why American policing is so fraught, you first have to understand its history, according to Connie Hassett-Walker, a professor of criminal justice at Kean University in New Jersey. In the South, policing evolved from slave patrols, white vigilantes who enforced slavery laws; in the North, it emerged as a way to control a “dangerous underclass” that included African-Americans, Native Americans, immigrants and the poor. “Policing’s institutional racism of decades and centuries ago still matters because policing culture has not changed as much as it could,” she writes in The Conversation. “The roots of racism in American policing — first planted centuries ago — have not yet been fully purged.”

But what would pulling out those roots really look like? For some, the answer is simply a matter of marshaling enough political will to make ambitious reforms: renegotiating police union contracts to bolster accountability, initiating a truth and reconciliation process through which the country can come to terms with its history of abusive policing, even potentially hiring more police officers. “We can live in an America where the police do not kill people,” Campaign Zero says. “Police in England, Germany, Australia, Japan, and even cities like Buffalo, N.Y., and Richmond, Calif., demonstrate that public safety can be ensured without killing civilians.”

[Related: “Are black communities overpoliced or underpoliced? Both.”]

But a growing number of people believe that the American practice of policing cannot be rescued from its origins. “Systems of oppression, like slavery, Jim Crow and mass incarceration, must be reduced and abolished — not reimagined,” write Derecka Purnell and Marbre Stahly-Butts in The Times. “Police officers, who primarily put people in cages, are the enforcers of mass incarceration. We must reckon with the reality that the police are part of the problem and stop investing money, power and legitimacy in them.” Josie Duffy Rice, the president of The Appeal, tweeted:

The tensions between those who want to see American policing reformed and those who want to see it revolutionized or eliminated may become more pronounced amid the protests occurring in Minneapolis. But what the two camps share is a conviction that Americans need to rethink their relationship to policing and their instinct to default to punishment as a response to all manner of social ills. There are some problems — like homelessness, or a pandemic, or a man asking you to leash your dog in Central Park — that law enforcement cannot solve.

Do you have a point of view we missed? Email us at debatable@nytimes.com. Please note your name, age and location in your response, which may be included in the next newsletter.

“Police departments are broken. Is it time to abolish them all together? | Pro/Con” [The Philadelphia Inquirer]

“George Floyd Is Killed: An Outcry Against the Police” [The New York Times]

Here’s what readers had to say about the last debate: Will the Coronavirus Kill College Admissions Tests?

Fabio Girelli-Carasi, a professor at CUNY, Brooklyn College: “I tend to agree that, biased as they are, standardized tests offer at least a common benchmark. One way to make them less stressful and less unjust could be to take away the clock factor, namely, let students take as long as they want to complete the tests. … Not long ago in academia we used to discuss how to best address different ‘learning styles.’ SAT and ACT couldn’t be bothered.”

Samadrita, from Boston: “To genuinely level the playing field, we need to bring equal access to good-quality teaching. This seems impossible in this model where the well-to-do self-segregate into certain school districts and teacher pay is dependent on local property taxes.”

Marc, from Puerto Rico: “I was a Fulbright scholar in Belgium in the 1970s. The policy there was one of open admissions. Any high-school graduate with a Greek-Latin diploma (this was later extended to students who had a science diploma) would be admitted to college. Approximately one half of the students flunked out the first year. Admittedly, this was hard on that half. On the other hand, it provided a nondiscriminatory method of insuring that those who were pursuing a college program were suited for it.”

Opinion | Why George Floyd Won't Be the Last American Killed by the Police - The New York Times
Posted by John H Armwood II at 8:27 AM