George Floyd: Donald Trump under fire as violence flares across America | US news | The Guardian 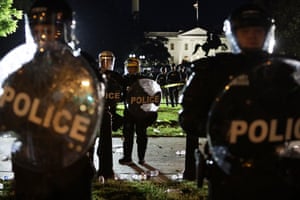 "The chaos and crisis engulfing America came to the president’s doorstep on Saturday night, as protesters chanting “I can’t breathe” and “Fuck Donald Trump!” clashed with the Secret Service and police outside the White House.
It was a visceral warning that after three years of relative peace and prosperity, Trump is in danger of being overwhelmed by cascading disasters: the coronavirus pandemic, which has taken more than 100,000 lives, an economic slump that has cost 40m jobs, and rising social unrest.
“If there was ever a time we need leadership in the White House, it is now, to help heal our nation,” Democratic congresswoman Val Demings told NBC’s Meet the Press on Sunday. “But I don’t know why I would expect this president to do something that he has never done before and we have never seen before.”
The capital was no exception to nationwide protests over the death of George Floyd, a 46-year-old African American man who was killed on Monday after a white Minneapolis police officer pressed his knee on his neck.
People gathered outside the White House on Friday night and returned on Saturday, facing a barricade formed by the Secret Service, parks and city police and their vehicles. The executive mansion resembled a fortress.
Protesters knocked over steel barriers and threw fireworks and bottles. Officers used batons, riot shields and pepper spray. After hours of relative calm and a peaceful march through the city, the situation deteriorated around midnight, as demonstrators were driven back by tear gas.
Breaking into small groups, some set cars ablaze, smashed windows with bats and rocks and looted shops downtown. At the front of the Oval Room, a ritzy restaurant where guests have included former presidents George HW Bush and Bill Clinton, a protester sprayed red paint: “The rich aren’t safe anymore!”
From Atlanta to Chicago to Salt Lake City to Los Angeles, there were similar scenes as peaceful daytime protests were followed at night by fires and looting, police firing rubber bullets and tear gas. There was a demand for courageous moral leadership, to find a way out of the malaise by offering unifying grace notes.
But Trump, who forged his political identity in racist conspiracy theories about Barack Obama’s birthplace, has proved unable to articulate the accumulated pain of black Americans over 400 years of slavery, segregation and police brutality, now exacerbated by a pandemic that has taken a disproportionate toll on communities of colour. Instead he has resorted to a series of tweets that critics found divisive, inflammatory and self-serving.
On Friday he branded the protesters “thugs” and warned: “When the looting starts, the shooting starts”, a historically loaded phrase that Twitter hid behind a warning, accusing him of glorifying violence. On Saturday he claimed the Secret Service had been ready to deploy “the most vicious dogs, and most ominous weapons, I have ever seen” on crowds outside the White House.
He has also blamed the media, Democrats including Mayor Jacob Frey of Minneapolis and an anti-fascist movement known as Antifa. On Sunday afternoon Trump tweeted: “Congratulations to our National Guard for the great job they did immediately upon arriving in Minneapolis, Minnesota, last night. The Antifa-led anarchists, among others, were shut down quickly. Should have been done by mayor on first night and there would have been no trouble!”
He added: “The United States of America will be designating Antifa as a Terrorist Organization” – a tweet for which the legal basis was not immediately clear.
With an election less than six months away there are fears that Trump, who ran on the slogan “Make America great again”, is motivated more than ever by what plays to his support base, encouraging him to pour fuel on the fire of racial division with a law-and-order crackdown.
Robert Reich, a former labour secretary now a Guardian columnist, tweeted: “More than 100,000 Americans dead, the highest unemployment since the Depression, America in flames, the national guard deployed. Make America Great Again was a sick hoax.”
In such a dark hour, an American president might be expected to address the nation. Trump had no such plans on Sunday. David Frum, a former speechwriter for George W Bush, told CNN: “Well, that’s good, this president’s shouldn’t speak because what could he possibly say?
“He’s already spoken. He’s already conjured up the image of dogs attacking protesters, one of the most powerful anti-civil rights images this country has. That’s what’s on his mind. He’s identifying with the people who unleash dogs on protesters.”
Frum added: “Donald Trump’s authority is slowly draining away. He still has the power of the presidency but none of the moral authority.”
Trump has a long history of racially divisive rhetoric, including his response to deadly clashes in Charlottesville, Virginia in 2017, when he drew moral equivalence between white nationalists and anti-fascist protesters. As on that occasion, few members of his own Republican party have spoken out to condemn him.
Democrats complained of a leadership vacuum. Keisha Lance Bottoms, the mayor of Atlanta, told CNN’s State of the Union: “He should just stop talking. This is like Charlottesville all over again. He speaks, and he makes it worse. There are times when you should just be quiet. And I wish that he would just be quiet.
“Or if he can’t be silent, if there is somebody of good sense and good conscience in the White House, put him in front of a teleprompter and pray that he reads it and at least says the right things, because he is making it worse.”
Trump’s re-election hopes had already been damaged by impeachment and his handling of the pandemic. A new Washington Post-ABC News poll shows Democrat Joe Biden leading Trump to 53% to 43% nationally.
Biden said in a statement: “Protesting such brutality is right and necessary. But burning down communities and needless destruction is not. We are a nation in pain, but we must not allow this pain to destroy us.”

George Floyd: Donald Trump under fire as violence flares across America | US news | The Guardian
Posted by John H Armwood II at 6:59 PM