Opinion | ’Twas the Eve of Impeachment - The New York Times 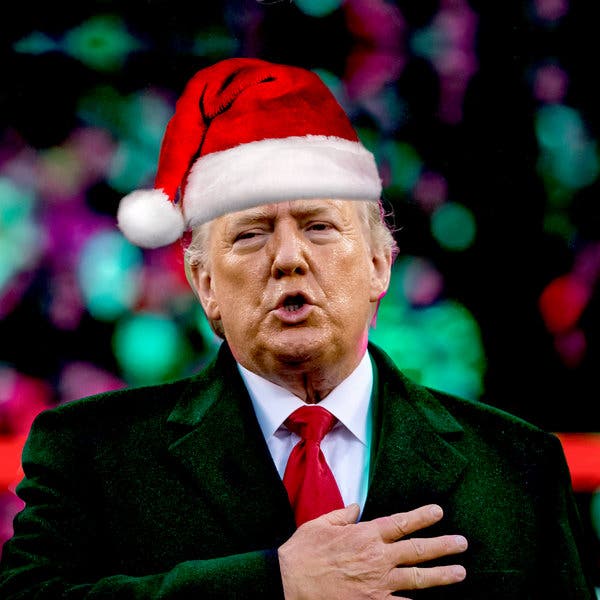 ’Twas the eve of impeachment, when all through the House

No Republicans wavered, each last one a louse.

The articles were drafted by Democrats with care

In hopes that a conscience would soon bloom there.

We pundits were tossing all steamed in our beds,

While Trump’s certain acquittal danced in our heads.

And I in frustration, feeling all solemn,

Wished I could capture my woe in a column,

When out on the web there arose such a clatter,

I signed in to Twitter to see what was the matter.

And there I beheld him, the master of lies,

He savaged the Bidens, he smeared Adam Schiff,

And cycled through villains in a furious jiff,

David Leonhardt helps you make sense of the news — and offers reading suggestions from around the web — with commentary every weekday morning.

Not to mention distractions, like the teeth of the Speaker.

Could a “leader” be cruder, could his morals be weaker?

So now he’s a dentist, in his all-knowing ways?

I prayed for deliverance one of these days.

When what to my cynical eyes did appear

But a raft of excuses pulled by mangy reindeer,

Gift subscriptions to The Times. Starting at $25.

With a weasel-eyed driver, so meek and so zany,

I knew in a moment he must be Mulvaney.

And Trump gloated, so bloated, and called them by name:

Please fly this democracy into a ditch!

It is how you will save me. It is how I prevail.

Or else I will join poor Paul in the jail.

That’s the toll of a presidency ended too soon,

So you must sing along to my favorite tune:

That’s the verse, that’s the chorus, for eternity.”

He was dressed in a necktie, from his jowls to his soles.

He had tanned beyond tanning. Imagine the moles.

His hair, how it swirled! His legs, how they splayed!

On such fishy foundations was his confidence laid.

And we couldn’t stop looking — not his fans, not his foes.

That was what he was after: the show of all shows.

Still it was soaring toward a second season.

The economy roared. The Democrats whimpered.

In the bag that Trump carried, he had goodies galore:

They weren’t for the many, they favored the few,

But that was obscured by the smoke that he blew.

As he hid his true airs with bad diet and diction.

He could do as he wanted and never know fear,

For an elf — and a savior! — named Barr hovered near.

And then there was Tucker and of course Hannity

To put an extra-fine gloss on insanity.

What great luck to discover a country so riven

You could smash it and rule it if suitably driven.

You could summon the Russians, you could bully Ukraine,

Just as long as you made “It’s fake news!” your refrain.

I cringed as I watched him and cried for us all,

Our values, our futures hijacked by his gall.

A last bid to preserve them was cause to impeach

But his party’s corruption put him beyond reach.

So then why all his thrashing? His howls of dejection?

It was just a performance for the next election.

It brought more donations. It rallied the base.

You could see, if you looked, a clear smirk on his face.

If you listened, you heard it: a lilt in his voice.

So as history scarred him, he could nonetheless yell,

“Merry TrumpMas to all! I’m the king of this hell.”