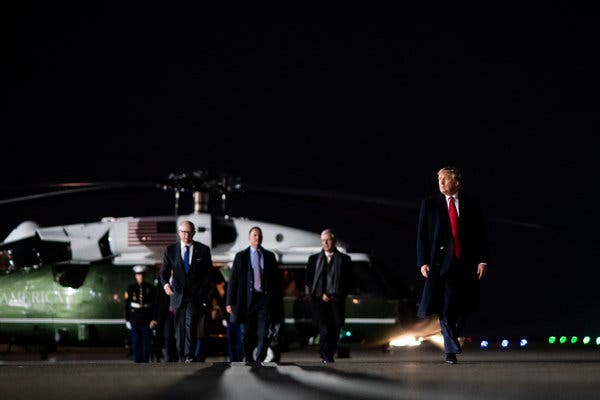 "WASHINGTON — When times turn tough, presidents can hop on Air Force One to escape the country for a while and stride purposefully across the world stage. But the world stage was not so friendly this week for President Trump, who landed back in Washington on Wednesday night to confront a grim couple of weeks ahead.

Mocked by peers behind his back at a NATO meeting in London, Mr. Trump abruptly canceled a news conference and bolted early, only to fly home to a capital in the throes of judging whether he is fit for office. After hobnobbing with the queen, the president now faces the daunting likelihood that by Christmas he will become the third president impeached for high crimes and misdemeanors.

The NATO meeting had seemed like an opportunity to demonstrate his global leadership like Presidents Richard M. Nixon and Bill Clinton sought to do with overseas trips during their own impeachment struggles. Scheduled long ago, the meeting allowed Mr. Trump and his allies to assail his domestic foes as “unpatriotic” for proceeding with an impeachment hearing while the commander in chief was overseas and gave him a chance to boast of his success in pressing the allies to invest more in defense.

But the visit was soured by a contentious meeting with President Emmanuel Macron of France and a hot-mic video that captured other world leaders making fun of Mr. Trump. In response, a sullen president said one of the leaders caught talking on the video, Prime Minister Justin Trudeau of Canada, was “two-faced,” and then slipped out of town without the scheduled wrap-up session with reporters, seemingly intent on not further spoiling the image of a successful visit.

[Politicians have a long history of being caught saying impolitic things. Let’s roll the tape.]

“The Fake News Media is doing everything possible to belittle my VERY successful trip to London for NATO,” he wrote on Twitter as Air Force One streaked across the Atlantic. “I got along great with the NATO leaders,” he added, claiming credit for persuading them to increase their military spending, although wildly inflating the actual numbers. “No increase for U.S., only deep respect!”

Quarreling with foreign leaders, of course, never troubled Mr. Trump before and in some ways has domestic political appeal with a Republican base that cheers on his defiance.

“The president has never been much bothered by shaking up international conventions, so tussling with foreign leaders, by those standards, isn’t a bad thing from his perspective,” said Antonia Ferrier, a former aide to Senator Mitch McConnell, Republican of Kentucky and the majority leader. “For many Americans, having their president stand up to foreign leaders is a sign of strength.”

Sam Nunberg, a former political adviser to Mr. Trump, said the optics of the London visit would appeal to different elements of his base. “He held contentious press conferences with world leaders who are disdained in conservative circles while also getting the all important 10 Downing Street visit and greeting with the queen at Buckingham Palace, which always plays well with mid and high income voters,” he said.

Still, Mr. Trump seemed bothered by the conversation between the other leaders. Mr. Trudeau seemed to deride Mr. Trump for going off schedule to answer questions from reporters on Tuesday. “He was late because he takes a 40-minute news conference at the top,” the prime minister told Mr. Macron, Prime Minister Mark Rutte of the Netherlands, Prime Minister Boris Johnson of Britain and Princess Anne.

“You just watch his team’s jaws drop to the floor,” Mr. Trudeau said at another point in the video, expressing astonishment at Mr. Trump’s behavior. The other leaders are seen smiling in seeming sympathy or adding their own unheard comments to the discussion.

The overheard conversation came after Mr. Trump and Mr. Macron had engaged in a somewhat testy public session earlier in the day. “Let’s be serious,” Mr. Macron chided the president at one point during a discussion of Islamic State fighters.

At a separate session with reporters, Mr. Trump had complained that Mr. Macron’s recent comments bemoaning American disengagement with NATO had been “very, very nasty.”

The joking may have touched a nerve with Mr. Trump, who has long resented elites he felt did not show him proper respect or welcome him into their circles, whether it was Manhattan business titans or Washington political veterans. He visibly seethed in 2011 when President Barack Obama ridiculed him from stage during a black-tie Washington dinner.

“Trump doesn’t just want to be in the club, he wants to be the unquestioned leader and center of attention,” said Gwenda Blair, a Trump biographer. “It had to be both humiliating and infuriating that the other heads of state who were mocking him were untouchable by tweet or insulting nickname, but no doubt he was already calculating the next round of tariffs he would send their way.”

Foreign trips were a relief for Mr. Nixon and Mr. Clinton at similar points in their presidencies. As Watergate bore down in the summer of 1974, Mr. Nixon traveled to the Middle East and then the Soviet Union, reinforcing his peacemaking initiatives. Mr. Clinton similarly headed to Russia and Northern Ireland just after a grand jury appearance in 1998 and then later in the fall to the Middle East.

But in both cases, any relief was short-lived. Mr. Nixon ended up resigning weeks after getting home, and Mr. Clinton was impeached by the House only days after his return. The complaints about impeachment interfering with foreign policy rang loud then as well; Mr. Clinton was in the midst of bombing Iraq for defying international weapons inspectors even as the House took its vote.

There is no escape for Mr. Trump either, not in foreign cities, not in the Oval Office and not on the television he stares at upstairs in the White House for hours each day. His presidency is tethered to impeachment, his legislative agenda mostly on hold, his foreign policy overshadowed, his re-election on the line. He takes refuge in the boisterous and jampacked campaign rallies he holds and in the morning and evening lineups on Fox News.

While in London, Mr. Trump defiantly declared he would not watch the opening of the House Judiciary Committee’s impeachment hearings because he would be too busy conducting affairs of state, even as he lashed out at Democrats as “deranged,” “sick,” “nuts,” “crazy” and, in one case, a “maniac.” But while his blue-and-white jet headed back to Washington, he (or aides operating his account in his name) nonetheless blitzed out a couple dozen tweets recirculating posts from Republican allies castigating the hearing as it progressed.

At the White House in his absence, the atmosphere was somewhat surreal. The televisions around the building were tuned to the various news networks, especially Fox News, as they broadcast the hearing, but the volume was usually muted and aides sought to go about their business.

The White House refused to participate in the hearing, arguing that the process has been rigged by partisan Democrats, but it did send a couple of aides to sit in the hearing room and monitor the proceedings.

The assumption there, as elsewhere, was that the hearing changed no minds and the course of the next few weeks is already set — the House will probably vote by the end of the year to impeach along party lines, and the Senate will then hold a trial in which the president will not be convicted, setting him up to litigate the case during his re-election campaign.

“While I wouldn’t say impeachment is a good thing for the president, it is a highly divisive and partisan issue breaking down on party lines,” Ms. Ferrier said. “It has not changed people’s minds on the president. His approval ratings are remarkably consistent, in particular with Republican voters, and he clearly relishes a fight.”

But some who have been through this before said it was hard to put it aside. Dennis Ross, a foreign policy specialist who accompanied Mr. Clinton on his trip to the Middle East days before he was impeached, said that an impeachment vote remains part of a president’s legacy, even if it does not lead to his removal.

“Even though he may feel that he will be acquitted in the Senate because Republicans will not break ranks, and however much he tries to turn this to his advantage at a later point, the truth is no matter how you slice, it you can’t run away from the fact you were one of the few presidents who was impeached,” Mr. Ross said. “He obviously likes to be singled out, but not like this.”

Mocked Abroad and Assailed at Home, Trump Returns to Face Impeachment - The New York Times
Posted by John H Armwood II at 9:15 AM