Who Won the Debate? Experts Weigh In 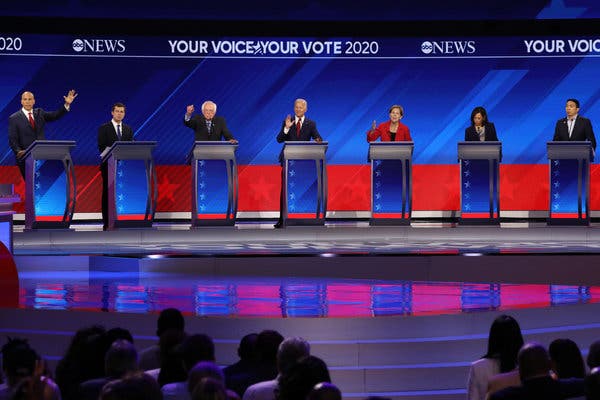 
Twitter can’t tell us whether, or how, Thursday’s debate might change voters’ minds. But it can give us the perspectives of some of the people with expertise on primary races: veteran campaign strategists and consultants from both parties. Here is a sampling of their reactions.

While there was no consensus on a single winner of the debate, the strategists generally agreed that Senator Elizabeth Warren of Massachusetts was near the top.

“The special thing about Warren is — she is the world’s biggest wonk and she is also the world’s best communicator of wonkishness. This is an extremely rare skill.” — Jess Morales Rocketto, political director of the National Domestic Workers Alliance
“I love how whatever the question, @ewarren widens our perspective — to think about the broader, structural problems at play.” — Sally Kohn, progressive commentator and former campaign strategist
“While Warren didn’t come near to dominating things the way she has in earlier debates, it was not a loss as she was (as always) solidly on message.” — Mike Murphy, Republican strategist

But some also noted that she (and Senator Bernie Sanders of Vermont, with whom Ms. Warren is ideologically aligned on many issues) faced more effective counterarguments than she had in past debates.

“Fascinating dynamic tonight. Up until now, Warren and Sanders have pushed their health care plans with values-based argument. Biden, Klobuchar, Buttigieg tonight all pushed back with a values-based argument of their own.” — Mo Elleithee, executive director of Georgetown Institute of Politics and Public Service and former Democratic National Committee spokesman

Sanders got a more mixed reception

Mr. Sanders had some good moments, the strategists agreed, but not as consistent or energizing a performance as Ms. Warren.

“Bernie just gave the best definition of Democratic Socialism I’ve ever heard. The key is to link it to quality-of-life improvements for Americans.” — Frank Luntz, Republican pollster and consultant
“Yes, he is authentic and consistent. But in a campaign you need to find some way to talk to people who don’t already support you. I never hear that case from him.” — Laura Belin, Iowa political commentator

Former Vice President Joseph R. Biden Jr., who had inconsistent showings in the last two debates, did very well in the first part of the debate, several strategists said.

“This is the Joe people were hoping to get as the front-runner.” — Jess McIntosh, SiriusXM host and former spokeswoman for Hillary Clinton
“When Biden talks about international issues, his entire demeanor changes. He is so tight, his posture changes. He should just hang on to this lane so hard, no one else can touch him in it.” — Jess Morales Rocketto

But when the moderator Linsey Davis asked him about his record on race and desegregation, he faltered.

“@JoeBiden demonstrating a deep weakness on understanding and discussing race. Asked a question about #slavery and he stumbled through a nonsense answer that went from segregation to Venezuela.” — Anna Sampaio, professor of ethnic studies and political science at Santa Clara University

Harris had some of the debate’s best lines

Senator Kamala Harris of California got good reviews for several exchanges, as well as for her focus on — baiting of, really — President Trump.

“@KamalaHarris aces her opening statement with a powerful direct address to @realDonaldTrump, then closes with wit: ‘And now you can go back to watching Fox News.’ Very effective. Allows the audience to see her going toe-to-toe with Trump.” — Paul Begala, former adviser to President Bill Clinton
“Frankly, I think @KamalaHarris is trying to provoke @realDonaldTrump to go after her on Twitter. She wants him to insult her (‘punch down’), which would help her rise in electability (and the polls) vis a vis @JoeBiden.” — Lara M. Brown, director of the Graduate School of Political Management at the George Washington University

Julián Castro, the former housing secretary, went after Mr. Biden early and hard, suggesting that his memory was failing. Strategists and commentators on both sides of the aisle cringed.

“Yeah, not sure the goading on age/forgetfulness is a good look.” — Kelly Dittmar, assistant professor of political science at Rutgers
“Democratic voters are not going to like Julian Castro’s badgering of Joe Biden. That might play well with parts of Dem Twitter, but not the rest of the Dem electorate.” — Frank Luntz
“@JulianCastro with a cheap shot on @JoeBiden. Joe fights back, then pulls up, knowing better than to punch down. Castro looks desperate; Biden ends the fight with a smile.” — Paul Begala

But Mr. Castro did earn some praise at other points, including for his discussion of race, and some argued that — whatever the merits of his jab at Mr. Biden — his boldness was admirable.

“Really the thing about @JulianCastro is that he has been totally fearless in these debates and he’s moved the conversation forward at every stage.” — Leah Greenberg, co-executive director of Indivisible, a liberal advocacy group

As for the rest …

Several other candidates had bright moments but did not manage to stand out in the overall reckoning.

“@BetoORourke is really moving on this issue of banning assault weapons. Very, very powerful.” — David Axelrod, former senior adviser to President Barack Obama
“Cory Booker speaks so passionately and compassionately on issues of racial justice that it’s hard not to be moved.” — Mo Elleithee
“@amyklobuchar just delivered a strong case for the public option & even had a good zinger (‘While Bernie wrote the bill, I read the bill.’) @ewarren is right that a single-payer system would be more efficient. But I am not confident Ds can win that argument in the suburbs.” — Laura Belin
“Powerful personal testimony from @PeteButtigieg about coming out ... he’s right — this election is about the voters and empowering/trusting them.” — Kurt Bardella, Democratic media strategist and former Republican congressional spokesman

As for the entrepreneur Andrew Yang, he drew a great deal of attention at the start for announcing that he would give 10 Americans $1,000 a month for a year. But by the time the debate ended three hours later, he had been greatly overshadowed."
Who Won the Debate? Experts Weigh In
Posted by John H Armwood II at 7:22 AM