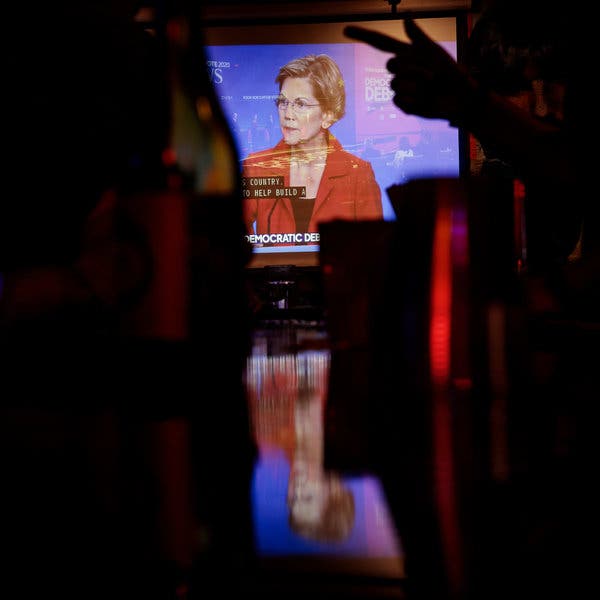 "She comes out of the latest Democratic debate stronger than ever.

Elizabeth Warren didn’t have her best debate on Thursday night, nor was she the most poetic or passionate candidate on that overcrowded stage. Beto O’Rourke, describing the toll of gun violence, forged a moment more moving than any of hers. Cory Booker had better one-liners. Pete Buttigieg’s beautifully shaped final answer put hers, delivered minutes earlier, almost immediately out of mind.

But she demonstrated precisely why she has been on an upward trajectory in the race for the Democratic presidential nomination and why that arc won’t be interrupted anytime soon.

She showed how canny she can be. How cunning.

Criticism came her way, and she brushed it off like so much lint.

And she was evasive — not a noble quality but an essential one when you’re running for office. Idealism puts you in play. Slipperiness gets you the prize.

I’ll come back to that last observation, but first: Afghanistan. Warren’s reputation isn’t staked on foreign-policy expertise. She focuses more on domestic issues than on international ones.

But when she was asked whether she would pull remaining American troops out of Afghanistan no matter the state of the conflict there, she emphatically said yes, then gave an explanation that was its own miniature master class in political communication.

She established authority by noting that she had traveled there — in the company of Senator John McCain, no less — and that she had grilled and listened hard to generals from her perch on the Senate’s Armed Services Committee.

She framed her misgivings about this particular military engagement in accessible, even folksy terms, saying that she would repeatedly ask military leaders “what winning looks like” and “no one can describe it.”

Then came the finishing touch, which made clear that hers wasn’t merely the perspective of some disconnected politician and that plenty in her background overlaps with the experiences of less powerful Americans.

“I have three older brothers who all served in the military,” she said. “I understand firsthand the kind of commitment they have made. They will do anything we ask them to do. But we cannot ask them to solve problems that they alone cannot solve.”

Now that’s an answer. And that’s why Warren will move on from this debate in strong form.

Will Joe Biden? I think so, at least for now. He may even benefit from having been the object of a nasty attack by Julián Castro, who all but accused him of suffering from dementia.

The two of them were quarreling over Biden’s contradictory turns of phrase about his health care plan, a hazy quasi-discrepancy that Castro decided to treat as a referendum on Biden’s very cognition.

It was gratuitous: Democratic voters can make their own judgments about Biden’s manner of speaking, which has long been sloppy and meandering, if not quite to this extent. Castro’s pointing it out wasn’t illuminating. It was just plain crude.

Buttigieg indicated as much, smartly but a tad too theatrically. “This is why presidential debates are becoming unwatchable,” he said. “This reminds everybody of what they cannot stand about Washington, scoring points against each other, poking at each other.”

“Yeah, that’s called the Democratic primary election, Pete,” Castro responded as he quickly developed a knack for condescension and sank deeper into his hole. “That’s called an election.” True enough, but I doubt that Castro’s campaign will be making and selling T-shirts with the phrase.

I also doubt that anyone’s fortunes will change much as a result of the debate, though some of the candidates were more appealing and compelling than others.

O’Rourke found a fight and fire that had been missing since his star-making Senate campaign. Buttigieg proved again that he knows what distinguishes him in this field of contenders and how to allude to those qualities in any and every riff. If you finished watching the debate and didn’t realize that he was the youngest candidate on the stage and the only military veteran and gay, then you probably also didn’t register how funny Kamala Harris finds herself, which is to say that Castro would have legitimate issues with your level of awareness.

Something weird has happened to Harris: She has gone from smoothly generating electric moments — on the Senate Judiciary Committee, at the first Democratic presidential debate — to contriving them, so that they have no glow or sizzle at all. I want to root for her but she just won’t let me.

Perhaps the most important figure on the stage was Amy Klobuchar, by which I mean that she most readily accepted and aggressively played the necessary role of suggesting that the most progressive proposals — namely, Medicare for All, backed by both Warren and Bernie Sanders — existed in the realm not of the doable but of the dream-able, and that they weren’t going to fix needy Americans’ lives anytime soon.

“When it comes to our health care and when it comes to our premiums, I go with the doctor’s creed, which is, do no harm,” she said. Then, referring to Sanders’s Medicare for All legislation, she added: “While Bernie wrote the bill, I read the bill. And on page eight — on page eight of the bill — it says that we will no longer have private insurance as we know it. And that means that 149 million Americans will no longer be able to have their current insurance.”

Don’t expect her to get any traction, though. She’s campaigning — admirably — in the realm of the doable. The dream-able is always going to be more vivid and romantic, and that’s where Warren dwells.

I worry lots about how Warren’s grandly liberal plans would play in a general election, but I’m impressed by her increasingly skillful navigation of the Democratic primary. Performance-wise, she’s pulling away from Sanders. He shouts and then shouts louder. She’s hardly quiet, but she has grown better and better at layering in personal anecdotes and dabs of humor, which he has never been any good at.

He still favors the word “oligarchic,” as if saying it for the zillionth time will finally make it roll off the tongue. She instead talks of “multinational corporations” and their corrupt chief executives, using more concrete images and language and doing, from a different end of the political spectrum, what Trump did with such effectiveness: identifying a class of villains on whom all of the country’s problems can be blamed.

She has learned to sail over and around potentially choppy waters. On Thursday night she spoke of her lifelong passion for education without giving the slightest hint of how much her positions on some education-related issues had changed over time. (She once supported vouchers, for example, but not one of her opponents onstage bothered to bring this up.)

She also refused to say whether Medicare for All would require a middle-class tax increase. One of the debate’s moderators, George Stephanopoulos, asked her, and then Biden pressed her, but she never grew flustered and never succumbed, instead stressing repeatedly that in terms of people’s reduced health care costs, they’d be ahead of the game.

You could call that deceptive. You could also call it disciplined. I shook my head but tipped my hat. She’ll be in this thing until the end."