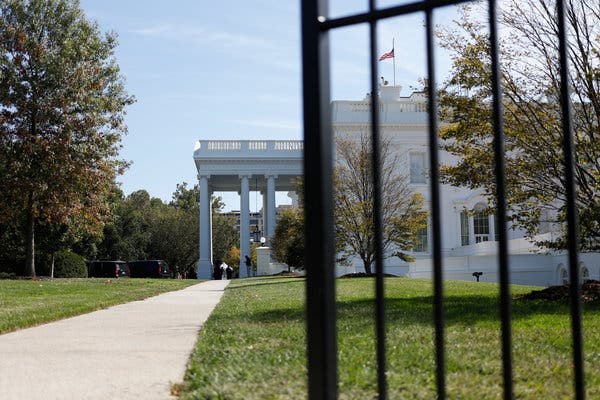 "WASHINGTON — Alexander Hamilton, as usual, got right to the heart of the matter. When the framers were designing the Constitution and its power of impeachment, one of the high crimes they had in mind was giving into what Hamilton called “the desire in foreign powers to gain an improper ascendant in our councils.”

For the authors of the country’s charter, there were few bigger threats than a president corruptly tied to forces from overseas. And so as the House opened an impeachment inquiry into President Trump’s interactions with Ukraine this past week, the debate quickly focused on one of the oldest issues in America’s democratic experiment.

The emerging battle over the future of Mr. Trump’s presidency will explore as never before the scope and limits of a commander in chief’s interactions with other countries. His adversaries echo the fears of the founders in accusing Mr. Trump of committing high crimes by pressuring Ukraine to dig up dirt on Democratic opponents while holding up American aid. Mr. Trump contends that impeaching him would infringe on the ability of future presidents to conduct foreign policy.

Unlike the impeachment battles involving Andrew Johnson, Richard M. Nixon and Bill Clinton, the debate over Mr. Trump turns on whether a president can solicit or accept help from abroad to advance his political fortunes and where lies the line between the national interest and personal interests.

Shortly after the latest revelations about Mr. Trump’s pressure on Ukraine, Senator Christopher Murphy, Democrat of Connecticut, denounced what he called “the president’s corrupt efforts to press a foreign nation into the service of his re-election campaign.”

“To use America’s global credibility as a casino token, to be cashed in for personal political gain,” he added, “is an intolerable abuse of power and totally anathema to the rule of law.”

Mr. Trump has maintained that he was the one trying to stop illicit foreign involvement in American politics by pressing President Volodymyr Zelensky of Ukraine to examine whether Ukrainians helped Democrats during the 2016 campaign and to look into unsubstantiated corruption allegations involving former Vice President Joseph R. Biden Jr.

“If that perfect phone call with the President of Ukraine Isn’t considered appropriate, then no future President can EVER again speak to another foreign leader!” he wrote on Twitter on Friday.

While the framers of the Constitution might never have imagined an impeachment battle waged 280 characters at a time, they did essentially foresee a showdown over foreign influence on an American president. In fact, in the early years of the republic, one of the most dominant fears of the political class was falling under the sway of other powers.

“There was a concern, even a paranoia, about foreign intervention, about people who don’t have the interests of a new country being taken advantage of by an old power,” said Corey Brettschneider, a political-science professor and constitutional scholar at Brown University and author of “The Oath and the Office.”

The framers expressed this explicitly by inserting what is now called the emoluments clause in the Constitution, barring international payments or gifts to a president or other federal elected official: “No person holding any office of profit or trust under them, shall, without the consent of the Congress, accept of any present, emolument, office, or title, of any kind whatever, from any king, prince, or foreign state.”

Once a forgotten element of the Constitution, it has attained new popular recognition in the Trump era as multiple critics of the president wage legal battles arguing that he has violated the emoluments clause through hotels and resorts of his that are patronized by Middle East sheikhs and other foreign potentates.

Indeed, Mr. Trump’s entire presidency has been shadowed by questions of foreign ties. The special counsel, Robert S. Mueller III, concluded his investigation by saying he had not found sufficient evidence to establish a criminal conspiracy between Russia and Mr. Trump’s 2016 presidential campaign, but that was a narrow legal judgment.

While the president has sought to interpret that report to mean that Russia’s ties to the campaign were a “hoax” made up by his opponents, in fact Mr. Mueller’s investigation documented extensive contacts between Mr. Trump’s associates and Russian figures.

It concluded that the Kremlin sought specifically to help Mr. Trump get elected, and Mr. Mueller said Mr. Trump’s campaign welcomed Russia’s help. Mr. Trump at one point even publicly called on Russia to find Hillary Clinton’s missing emails, and within hours Russian agents sought to do just that by trying to break into her computer servers.

In the end, House Democrats shied away from trying to impeach Mr. Trump on those grounds since Mr. Mueller said he could not establish a criminal conspiracy. But it set the stage for the current impeachment battle.

The concept of impeachment was adopted from Britain, where there had been plenty of misadventures in foreign policy involving bribes, treaties and ill-advised royal marriage matches over the years.

“Foreign policy mistakes or corruption of foreign policy is a big component of the body of British impeachment precedents that the framers had in mind,” said Frank O. Bowman III, a law professor at the University of Missouri and author of the new book, “High Crimes and Misdemeanors.”

The fear of foreign powers likewise animated the discussion over impeachment. The delegates who gathered in Philadelphia in 1787, seeking to replace the dysfunctional Articles of Confederation, wanted to create a stronger executive but not a king immune from accountability. The challenge was figuring out what would trigger the most radical remedy of removal from office.

At first, the delegates adopted a phrase from Hugh Williamson of North Carolina making a president “removable on impeachment and conviction of malpractice or neglect of duty,” a phrase so broad as to allow Congress to force out a chief executive not just for corruption but for ineffectiveness, more akin to a prime minister who loses a vote of confidence.

That went too far for some delegates and the debate was reopened. What they were looking to avoid, among other things, was a president abusing power for his own personal gain — and the thought of a president who subordinated the national good to foreign interests was high on the list.

James Madison feared that a president might “betray his trust to foreign powers,” while Gouverneur Morris of Pennsylvania, who at first opposed including an impeachment clause at all, agreed that they needed recourse for “the danger of seeing the first Magistrate in foreign pay.”

So they crafted a clause empowering Congress to impeach a president “for treason, or bribery.”

George Mason of Virginia argued that was too limited; there were plenty of abuses that did not add up to treason. He proposed adding “maladministration.” But that again seemed too open-ended to Madison, who complained that it would mean a president served essentially at the pleasure of the Senate.

Mason then suggested “other high crimes and misdemeanors,” the compromise that was then accepted.

But Americans have been debating ever since just what qualified as a high crime. Again, the framers had illicit ties with foreign powers in mind. During the Virginia ratifying convention, Edmund Randolph linked impeachment to foreign money, saying that a president “may be impeached” if discovered “receiving emoluments from foreign powers.” Others suggested that lying to the Senate about information related to a foreign treaty would qualify for impeachment.

That concern would continue to be a preoccupation of the country’s early leaders. In his farewell address, George Washington spoke of “the insidious wiles of foreign influence,” calling it “one of the most baneful foes of republican government” and urging America “to steer clear of permanent alliances with any portion of the foreign world.” Thomas Jefferson echoed that in warning against “entangling alliances” with foreign powers.

Other presidents have been accused of crossing lines when it came to foreign affairs and personal political interests. As a candidate in 1968, Mr. Nixon sought to secretly throw a “monkey wrench” into Vietnam peace talks conducted by President Lyndon B. Johnson’s administration to help his own election chances, although that took place before he was himself the president.

That was not included as part of the articles of impeachment later drafted against him over Watergate. Some Democrats wanted to charge Mr. Nixon with high crimes for concealing the bombing of Cambodia but the House Judiciary Committee rejected that. Mr. Nixon resigned before the full House voted on whether to impeach him.

People associated with Ronald Reagan’s campaign in 1980 were accused of striking a secret deal with Iran to delay the release of American hostages until after the election, but a bipartisan House investigation later concluded there was no merit to the allegations.

Mr. Clinton came under fire after Chinese interests tied to the Beijing government funneled large sums of money into Democratic coffers during his 1996 re-election campaign. But that controversy was soon overshadowed by revelations of his affair with Monica S. Lewinsky, leading to his impeachment and acquittal on charges of perjury and obstruction of justice.

The only impeachment involving foreign policy came in the case of a senator, William Blount, who was accused in 1787 of scheming to transfer parts of Florida and the Louisiana territory to Britain. The House impeached Blount but he fled Washington and the Senate opted to expel him rather than convict him at trial.

A mere 232 years later, Congress and the country will now again confront the question of where the line sits between national interests and personal political interests."

Impeachment Battle to Turn for First Time on a President’s Ties to a Foreign Country - The New York Times
Posted by John H Armwood II at 12:05 PM