Waning of American Power? Trump Struggles With an Asia in Crisis 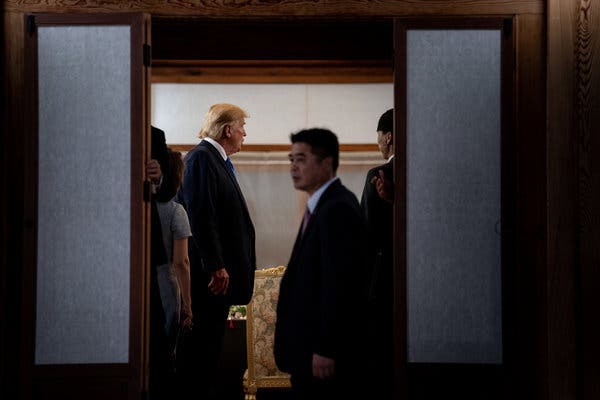 
WASHINGTON — For two and a half years, President Trump has said he is finally doing in Asia what he asserts his predecessor, Barack Obama, failed to achieve with a strategic pivot: strengthen American influence and rally partners to push back against China.
But as violence escalates and old animosities are rekindled across Asia, Washington has chosen inaction, and governments are ignoring the Trump administration’s mild admonitions and calls for calm. Whether it is the internal battles in India and Hong Kong or the rivalry between two American allies, Japan and South Korea, Mr. Trump and his advisers are staying on the sidelines.
The inability or unwillingness of Washington to help defuse the flash points is one of the clearest signs yet of the erosion of American power and global influence under Mr. Trump, who has stuck to his “America First” idea of disengagement, analysts say.
“Without the steady centripetal force of American diplomacy, disorder in Asia is spinning in all sorts of dangerous directions,” said William J. Burns, a deputy secretary of state in the Obama administration and the president of the Carnegie Endowment for International Peace. “The net result is not only increased risk of regional turbulence, but also long-term corrosion of American influence.”
All American administrations have limited ability to steer events abroad. Foreign governments often ignore requests from the United States. Since 2001, the nation’s long wars, especially in Iraq, have cost it credibility. And the emergence of China as an economic powerhouse and Russia as an anti-Western force means factors outside the Trump administration are contributing to the weakening of American power.
But critics say Mr. Trump’s policies — more focused on cutting American expenses abroad than on building partnerships — have sped that erosion and emboldened governments to ignore entreaties from Washington.
Indian troops are suppressing protests in the contested region of Kashmir after New Delhi ended the territory’s autonomous status, despite Mr. Trump’s offer last month to India and Pakistan to mediate the decades-old dispute.
South Korea announced on Monday that it was dropping Japan from a list of preferred trading partners, ramping up a conflict that jeopardizes Washington’s most important alliances in Asia. Mr. Trump’s top foreign policy officials had advised both nations to settle their differences, to no avail.
Meanwhile, North Korea, the biggest security threat in East Asia, has done five recent tests of short-range ballistic missiles or rocket systems — with no chastisement from Mr. Trump.


Waning of American Power? Trump Struggles With an Asia in Crisis
Posted by John H Armwood II at 7:32 AM