Opinion | What Are Trump and Netanyahu Afraid Of? 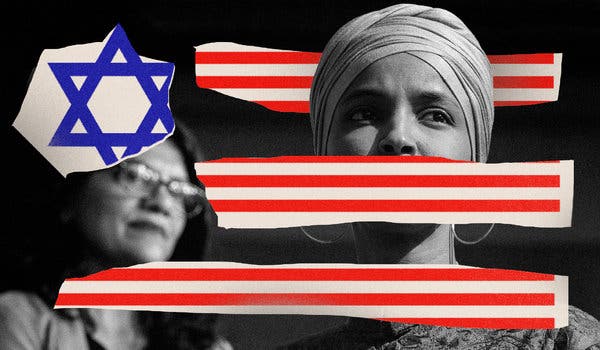 Update: On Friday, Israel said it would allow Representative Rashida Tlaib to enter the West Bank to visit her grandmother.

It is difficult to stomach the notion that an American president would put pressure on Israel to deny entry to two members of the United States Congress.

There are not many traditions of decorum that President Trump has not trampled on since entering the White House. But to put at risk, so cynically, America’s special relationship with Israel solely to titillate the bigots in his base, to lean so crassly on a foreign leader to punish his own political adversaries, to demonstrate so foul a lack of respect for the most elemental democratic principles, is new territory even for him.

Though facing a difficult election next month for which he sorely needs the support of his fractured right-wing base, Prime Minister Benjamin Netanyahu was said to be leaning toward allowing Representatives Ilhan Omar of Minnesota and Rashida Tlaib of Michigan to travel through Israel “out of respect for the U.S. Congress and the great alliance between Israel and America,” as his ambassador to Washington, Ron Dermer, wisely said last month. But, on Thursday, Mr. Netanyahu cravenly bowed before the pressure from Mr. Trump.

“It would show great weakness if Israel allowed Rep. Omar and Rep. Tlaib to visit,” Mr. Trump tweeted on Thursday morning. “They hate Israel & all Jewish people, & there is nothing that can be said or done to change their minds.”

Sad, to borrow one of Mr. Trump’s favorite words. How sad that two leaders — each desperate to look tough to his own base — are risking a bipartisan relationship built between these two nations over generations. Only weak leaders would risk so much for a reward so negligible. To what end? To win a few political points against two of the newest members of Congress? To capture a few news cycles? To dial up the outrage machine just one more notch? Confident leaders would never have risked so much for so little.

Though many American presidents have sought to influence Israeli decisions throughout the history of the Arab-Israeli conflict, they usually did so diplomatically — and to advance America’s interests. Mr. Trump, by contrast, leaned on Mr. Netanyahu as he would on one of his own appointees, in broad view, and in direct violation of what the president of the United States should be doing when democratically elected lawmakers are threatened with a blockade by an allied leader.

There can be, and has been, considerable debate over what the two congresswomen, the first two Muslim women elected to Congress and both sharp critics of the Israeli government, have said and done. They have supported the controversial Boycott, Divestment and Sanctions (B.D.S.) movement aimed at pressuring Israel into ending its occupation of the West Bank, a movement that some Jews have deemed to be anti-Semitic.

Yet, from the outset, Mr. Trump has pounced on the religion and background of the two congresswomen to fan racial divisions. Ms. Omar and Ms. Tlaib were two of the four congresswomen of color, along with Alexandria Ocasio-Cortez of New York and Ayanna Pressley of Massachusetts, who Mr. Trump said should “go back” to the countries they came from, giving rise to chants of “send her back” at a subsequent Trump political rally.

The visit Ms. Omar and Ms. Tlaib were contemplating was not to Israel proper, but to the West Bank, where they were to visit Hebron, Ramallah and Bethlehem, as well as Israeli-occupied East Jerusalem, on a trip co-sponsored by a Palestinian organization, Miftah, that promotes “global awareness and knowledge of Palestinian realities.” A visit was planned to the Al Aqsa Mosque, on what Israelis call the Temple Mount, an especially volatile site in the Israeli-Palestinian conflict. There is little question that their visit would have focused on Palestinian grievances over the Israeli occupation.

All that was clearly troublesome for Mr. Netanyahu, especially the support of the congresswomen for the B.D.S. movement. A relatively recent law allows the Israeli government to deny entry to supporters of the movement; it was this law that the government used to deny entry to the representatives.

In April the United States barred Omar Barghouti, one of the co-founders of the B.D.S. movement, from entering the country when he was scheduled to deliver a series of talks and attend his daughter’s wedding. Other American public figures have been detained by Israeli authorities, ostensibly because of their political views, including the IfNotNow founder, Simone Zimmerman, who was held at the border; a B.D.S. advocate, Ariel Gold, who was denied entry to the country; and the journalist Peter Beinart, who was held at the airport. Mr. Netanyahu later called Mr. Beinart’s detention a “mistake.”

Yet contrary to Mr. Trump’s tweet, it is blocking entry by two American legislators who are critics of Israel that shows great weakness, especially after Israel hosted visits by delegations of 31 Republican and 41 Democratic lawmakers this month. It has long been Israel’s mantra that critics of its policies should come see for themselves, and the country is certainly strong enough to handle any criticism from two members of Congress. Mr. Trump has done Israel no favor."

Opinion | What Are Trump and Netanyahu Afraid Of?
Posted by John H Armwood II at 5:16 PM