Opinion | With the Economy on Edge, Trump Sees Only Enemies - The New York Times 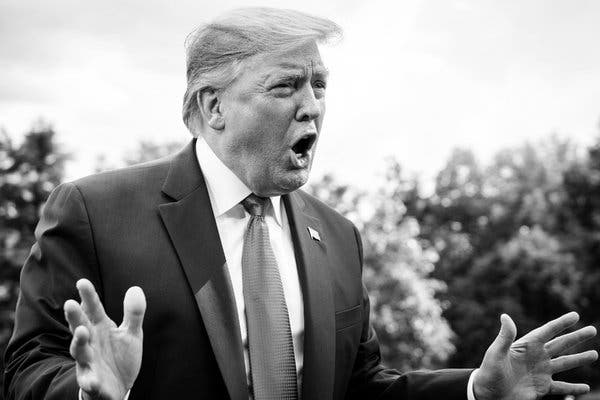 
President Trump began Friday in a pretty good mood, celebrating the support of Republicans and the strength of the economy in a flurry of early-morning posts on Twitter, the site where he spends a sizable chunk of his day.
But the president’s mood soured quickly as the news rolled in that both China and the Federal Reserve had defied his explicit demands.
We’ll let Mr. Trump speak for himself:
“My only question is, who is our bigger enemy, Jay Powell or Chairman Xi?” he tweeted in the morning, referring to the chairman of the Fed and the leader of China.
A few minutes later, Mr. Trump started tweeting like a potentate, issuing commands to American companies as if he had the power to do so.

David Leonhardt helps you make sense of the news — and offers reading suggestions from around the web — with commentary every weekday morning.
“Our great American companies are hereby ordered to immediately start looking for an alternative to China,” the president wrote.
Then, around 5 p.m., Mr. Trump posted a new set of tweets announcing higher tariffs on Chinese imports — a $27.5 billion tax increase for American consumers and businesses.
Mr. Trump’s Twitter tantrums are a recurring source of embarrassment for the American people, whom he serves. Yet even for this president Friday’s tweets seemed bizarre, sharpening urgent questions about Mr. Trump’s understanding of his role.
You might also think they’d cause some consternation within the Republican Party, which hasn’t traditionally embraced Soviet-style command and control of commerce. Investors were certainly unnerved. The Dow dropped 400 points in about 15 minutes, and kept sliding. The executive class wasn’t happy either. “It’s impossible for businesses to plan for the future in this type of environment. The administration’s approach clearly isn’t working, and the answer isn’t more taxes on American businesses and consumers,” said David French, chief lobbyist for the National Retail Federation. “Where does this end?”
Mr. Trump, unfortunately, does not seem to have a clear answer in mind.
The events that prompted his latest bout of undisciplined raging began Friday morning when China announced new tariffs on $75 billion of American goods — a response to Mr. Trump’s announcement in early August that he would impose tariffs on a broader range of Chinese imports beginning Sept. 1. China’s decision to escalate the trade war was a blow to Mr. Trump, who has insisted American tariffs will force the Chinese to make concessions.
Then, a few hours later, Mr. Powell gave a speech at the Fed’s annual conference in Wyoming in which he said uncertainty about global trade was weighing on the economy, and the Fed wasn’t entirely sure what to do about it. The remarks amounted to an implicit rebuke of Mr. Trump’s trade policies. While Mr. Powell left open the possibility that the Fed will cut interest rates this fall, he stopped well short of promising anything like the kind of dramatic stimulus campaign Mr. Trump has insistently called on the central bank to deliver.
The double indignity apparently was too much for Mr. Trump to suffer quietly.
“As usual, the Fed did NOTHING!” he began, then called Mr. Powell an enemy.
Mr. Trump has reason for economic anxiety: A growing number of forecasters predict that the longest period of economic growth in American history is drawing to a close.
And a downturn would make it harder for Mr. Trump to win a second term.
But the president’s insistent efforts to preemptively pin the blame on Mr. Powell and the Fed’s management of monetary policy don’t hold up to scrutiny. The Fed raised rates a little too high last year, and there is a reasonable case for lowering rates this year. But the biggest worry for the American economy right now is that corporations are sitting on their wallets, in part because of uncertainty about the impact of Mr. Trump’s campaign to disrupt existing patterns of global trade — especially between the United States and China.
Stanley Fischer, a former Fed vice chairman, said Friday in Wyoming that Mr. Trump is “Trying to destroy the global trading system.” Anxiety about global trade, and about Mr. Trump’s disruptive approach to international relations, is likely to feature in the discussions among leaders of the G7 nations when they gather in France this weekend.
There is also an important difference between questioning Mr. Powell’s judgment and calling him an “enemy.” Mr. Powell is a public servant who was nominated as Fed chairman by Mr. Trump and confirmed by the Senate, and who has conducted himself with admirable dignity in the face of Mr. Trump’s ad hominem attacks. His judgments as Fed chairman are deservedly subject to scrutiny and debate. But the unfounded accusation that Mr. Powell is an enemy of the United States raises questions about Mr. Trump, not Mr. Powell.
Mr. Trump’s latest moves in his trade war with China are also a cause for alarm.
Mr. Trump used to promise that it would be easy to improve the status quo: He would impose tariffs, and China would quickly agree to make changes like opening markets to American goods, curtailing its subsidies for Chinese manufacturers and preventing theft of intellectual property.
Instead, the conflict continues to escalate at the expense of the global economy.
The Fed has moved to lower borrowing costs, but as Mr. Powell noted Friday, it’s hardly clear that lower rates will outweigh the uncertainties created by Mr. Trump’s policies.
Mr. Trump’s comments on Friday seem unlikely to reassure businesses. The president’s tone was belligerent, while his language seemed detached from reality. He said he was ordering American companies to leave China, but a tweet is not a legal document, and presidents have limited authority to direct the affairs of private companies. The White House on Friday did not elaborate on what Mr. Trump meant, nor did it justify his right to issue such orders.
In addition, Mr. Trump announced that he would increase existing American tariffs on most Chinese imports by 5 percentage points, raising the top tariff rate to 30 percent.
Mr. Trump’s efforts to force the Chinese to the bargaining table have not worked. Hollow threats and higher tariffs will make things worse. If Mr. Trump wants to aid the economy, he should stop trading punches with China — and stop throwing tantrums on Twitter."

Opinion | With the Economy on Edge, Trump Sees Only Enemies - The New York Times
Posted by John H Armwood II at 11:34 PM