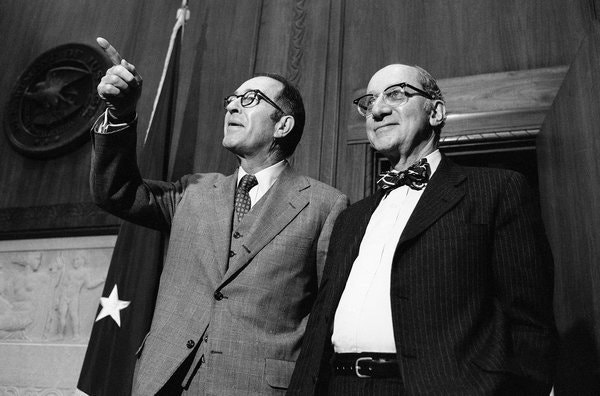 I had the great experience of clerking at Griffin Bell's law firm in 1985 and I particularly remember a funny conversation about military plans flying near the firm's, King & Spalding's Washington office at their 100th Anniversary celebration at the old Atlanta Historical Society.  He was a gracious man.

"Edward Levi and Griffin Bell were very different men. One was the son and grandson of rabbis, a legal scholar whose life revolved around the University of Chicago. The other was a country lawyer who became a master operator in the Atlanta legal world. One was appointed to high office by a Republican president, the other by a Democrat.
Yet for all their differences, Levi and Bell came to share a mission. Together, they created the modern Department of Justice and, more important, the modern American idea of the rule of law.

They were the first two attorneys general appointed after Watergate — Levi by Gerald Ford and Bell by his fellow Georgian Jimmy Carter. And they both set out to refashion the Justice Department into the least political, most independent part of the executive branch. “Our law is not an instrument of partisan purpose,” Levi said. It cannot become “anyone’s weapon.” Bell described the department as “a neutral zone in the government, because the law has to be neutral.”

They understood Richard Nixon’s deepest sins: He saw the law as an instrument not of justice but power. Yet Levi and Bell also knew that Nixon hadn’t been the only problem. Other administrations had also misused the law — investigating enemies and rivals, like civil-rights leaders. So Levi and Bell made sure that the crisis of Watergate didn’t go to waste.
They changed the rules for F.B.I. investigations. They put in place strict protocols for communication between the White House and Justice Department. They made clear — with support from Ford and Carter — that the president must have a unique relationship with the Justice Department.

“It’s perfectly natural and fine for the president and others at the White House to have interactions with the Justice Department on broad policy issues,” Sally Yates, the former deputy attorney general, told me last week. “What’s not O.K. is for the White House, and especially the president, to have any involvement with criminal prosecutions. That really turns the rule of law on its head.”

No administration has been perfect in the pursuit of neutral justice, but every one from Ford’s through Barack Obama’s stayed true to the post-Watergate overhaul. They allowed uncomfortable investigations to proceed unimpeded. They did not to treat the law as a weapon.
Then came President Trump.