Bill de Blasio: Biden Can Learn From My Mistakes - The Atlantic

Joe Biden Can Learn From My Mistakes

"When it comes to being unpopular, I’m unfortunately somewhat of an expert. 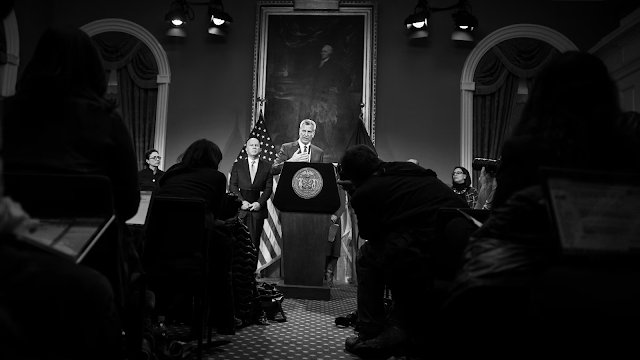 "Despite all the criticism thrown at him, President Joe Biden is actually a very good messenger. He’s likable, relatable, and reassuring. And as they used to say about George W. Bush, I’m pretty sure he’d be fun to have a beer with. Biden’s also accomplished: He led an impressive vaccine rollout, brought the economy back, and passed the biggest infrastructure bill in generations. Not bad for a little more than a year’s work.

So why isn’t he more popular? And can anything be done to make voters like him and his party more before the midterms?

I believe the answer to the second question is a resounding yes. But to get there, one must honestly answer the first question. And when it comes to being unpopular, I’m unfortunately somewhat of an expert. I made my fair share of mistakes. President Biden and the Democratic Party should learn from them.

Things started out right for me. In 2013, I became mayor of New York City because I showed people I would fight against a status quo that didn’t work for them. I called it the “Tale of Two Cities.” New Yorkers hated what had become of our city, and I did too. I was clearly on their side. I planned to tax the wealthy so their kids could have free pre-K. At school drop-offs and PTA meetings, I heard firsthand how much this mattered to parents desperately trying to make ends meet for their families.

In 2017, I won my second term with two-thirds of the general-election vote. But by last year my popularity had tanked. Why? I failed to give New Yorkers a clear sense of where I was taking them. I lost my connection with the people because I mistook real policy for real popularity. I let a focus on individual initiatives, no matter how noble or substantive, distract me from offering an overarching vision for the future.

I encountered crisis after crisis during my eight years as mayor of the nation’s largest city: crumbling public housing, dysfunctional jails, tensions between police and communities. I tried to address each in great detail, but in the process went days or weeks without tying these efforts back to my original mission: making New York better and fairer for everyone. I needed to engage with aggrieved residents of public housing, for example, the same as I did with those parents early on. I should have walked among them rather than just working for them behind closed doors. Voters need to know both what you’re up to and why you’re up to it. You have to help them feel your efforts.

I fear Biden is making the same mistake. He’s handling crucial problems as they arise, yet without illustrating to the public what a better America looks like. Yes, Americans expect him to address innumerable daily issues and run an extensive bureaucracy. And I understand that behind the scenes, he’s keeping together the extraordinary coalition he built to support Ukraine. But that example illustrates a bigger point: Keeping things together, even in the midst of a crisis, isn’t the same as moving things forward. It does not answer the public’s yearning for a sense of direction and it certainly doesn’t make the case for continued Democratic control of Congress.

As the mayor of New York City, I had one of the loudest megaphones in the country, and I failed to use it properly. Biden’s bully pulpit is a thousand times more powerful. He needs to use it to show that he truly empathizes with everyday Americans on the issues they care most about, such as inflation, public safety, and affordable health care. He then needs to articulate a way forward on each of these fronts and dare the Republicans to support him or get out of the way. I believe they will do neither, which the American people will duly note.

Biden still has a chance to do what I did not: present a clear, sharp message and repeat it incessantly. And I don’t just mean a catchphrase, but a vision for the direction of the country under his administration. All the Donald Trump rallies and Fox News commentators in the world can’t compete with the projection capacity of the White House. He needs to commit himself to a constant messaging offensive and shed the defensive tone and language he often defaults to.

This is not just about verbiage: Biden still has time to deliver more results before the election. Democrats in Congress can muster the votes to lower prescription-drug prices and to make insulin affordable for millions of American families. He also has a plan to make corporations and billionaires pay their fair share of taxes—a plan that polls through the roof, and not just among Democrats.

None of this is meant to let congressional Democrats off the hook. Although I truly believe the president’s voice will be the most important factor in the midterms, Democrats have to match it with a unified message and tangible new accomplishments. They did that as recently as 2018 with a near-universal focus on health care, which made them compelling and identifiable to voters. Democrats made clear that they were on the side of working Americans. They need to do it again.

None of what I’m suggesting is easy. But it can be done. There’s still time. A lot of voters are waiting for something to convince them that things can get better. Let that something be Joe Biden’s warm, positive voice, with a vision to match it."

Bill de Blasio: Biden Can Learn From My Mistakes - The Atlantic
Posted by John H Armwood II at 7:57 AM