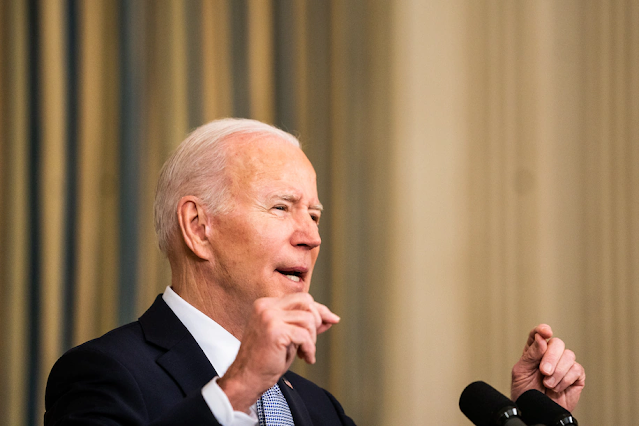 "Democrats who hoped that the strong monthly job numbers and the war in Ukraine would buoy Biden’s poll numbers have been thoroughly disappointed. After a brief rise in early March, the president’s approval rating sits at a lowly 41 percent in the RealClearPolitics average. The party’s chances of holding the Senate rest on a knife edge at best, and the prospects of a Democratic House next year grow dimmer by the day.

“I’m not quite sure what the disconnect is between the accomplishments,” Clinton told NBC’s Chuck Todd, “… and some of the polling.” But the answer is clear: In a new Harvard CAPS-Harris poll, the top two issues for Americans were inflation (32 percent) and the economy (27 percent). Bloomberg economists estimate that inflation will cost households an extra $5,200 this year. And as I noted last fall, though the administration may be proud of its achievements, many Democrats and most independents think Biden has accomplished little as president.

How to address these two weaknesses? A president’s inflation-fighting powers are limited, but liberal Democrats have pitched dozens of executive actions Biden can take to lower costs for Americans, such as tackling prescription drug prices or canceling student loan debt.

More moderate Democrats, on the other hand, are counseling Biden to reject that route. “It’s important that we legislate if we want long-term, durable policy,” Rep. Suzan DelBene (D-Wash.), chair of the New Democrat Coalition, told “Fox News Sunday.” Rather than the kaleidoscope of ideas progressives put forward, DelBene suggested focusing on passing “a bipartisan innovation bill to address supply chains and competition” and the remains of last year’s failed budget reconciliation package.

Powerful voices in the party are making similar arguments for the status quo. “I’m well aware that midterms are obviously always difficult for the party in power,” Clinton told NBC’s Todd. “But we’ve got a great story to tell. … And for those who, you know, say it hasn’t gone far enough, that’s always the chorus in Democratic Party politics.”

Which brings us to those Amazon workers who voted Friday to unionize the company’s Staten Island warehouse — a first for employees at the company. (A separate unionization vote at the company’s Bessemer, Ala., warehouse remains too close to call.) When the union drive began, Amazon Labor Union founder Chris Smalls told Labor Notes’s Luis Feliz Leon, there were just four members on the organizing committee. They prevailed over one of the world’s largest companies and consultants who were being paid $3,200 a day. (Amazon founder Jeff Bezos owns The Post.)

The activists won by following what organizing committee member Justine Medina called the “classic playbook” for organizing: “Do not be afraid to fight, to get as dirty as the bosses will, to match or beat the energy they’re bringing. Do not be afraid to agitate and to antagonize the bosses, as a union should. Use every tool in your toolbox.”

Like those Amazon workers, Democrats cannot be afraid to fight. Just because a handful of moderate holdouts have derailed key parts of Biden’s legislative agenda doesn’t mean the struggle is over. While a president has no boss to “antagonize,” Democrats can take on other people’s bosses — both proverbial and literal. Building on the president’s “billionaire minimum income tax” with executive actions to lower drug prices, strengthen overtime, boost worker protections and tackle student debt will provide immediate relief to millions and reinvigorate unmotivated voters.

As for using the whole toolbox, DelBene is right that legislation is more durable than executive action. But when attempted legislative fixes aren’t passing at all, executive orders can provide real relief, even if it’s temporary. And if Republicans want to run on raising the cost of insulin or preserving fossil fuel subsidies while oil companies profit from sky-high gas prices, more power to them.

In an interview last year with Jacobin’s Alex Press, Smalls said, “I’m using a lot of the principles that I learned at Amazon, against them. My favorite one is: ‘have a backbone and commit.’ … I had a backbone, I stood up for what I thought was right, and I’m committing to seeing change.”

Voters reward politicians who they believe will stand for principles. The Democrats’ road to the midterms might run uphill, but their best chance of pulling off the upset is to fight from now until Election Day."