"Stacey Abrams said there should be a “hue and cry” from business leaders in opposition to far-reaching proposed voting restrictions in Georgia and other states instead of the more guarded response from corporate titans in the weeks since the measures were first introduced.

The Georgia Democrat called on athletes and other activists to demand that businesses more forcefully speak out against restrictive proposals such as Georgia measures that would severely limit who could vote by mail.

“There were businesses that were silent in the election for whatever reason. But there should be no silence from the business community when anyone in power is trying to strip away the right to vote from the people,” she said on a call Tuesday organized by Fair Fight Action and More Than A Vote, two prominent voting rights organizations. “There should be a hue and cry.”

Abrams, who lost the 2018 gubernatorial election, has built Fair Fight into a nationally known platform to expand voting rights and fight efforts to place new barriers to the ballot box. She’s partnered with More Than a Vote, which was launched by NBA superstar LeBron James.

She’s one of a growing number of influential voices who say powerful corporations that waded into other contentious political fights, such as the 2016 battle over “religious liberty” legislation, should aggressively oppose restrictive measures in Georgia and other states.

So far, business lobbies are actively engaging in the legislative wrangling under the Gold Dome, and they tout the need for equitable access to the polls. But most of the state’s most powerful firms are not outspoken in opposing proposed elections restrictions moving through the Legislature.

An exception is the Metro Atlanta Chamber, which said Monday that “repealing no-excuse absentee voting does little to make the process more secure, and does so at great risk to participation.”

Frustrated activists want more strident action. The Georgia chapter of the NAACP demanded that the state’s biggest brands stand against “a second coming of Jim Crow.” And a coalition of groups recently ran full-page ads in newspapers around the state urging “Corporate Georgia” to take a stand.

“We won’t patronize these companies and corporations who don’t show up for us,” said LaTosha Brown, co-founder of Black Voters Matter, which has helped organize the pressure campaign. “When are the businesses going to have enough courage to say we’re not going down this road anymore?”

Abrams was featured on the call with Ari Berman of Mother Jones and Chris Webber, the former NBA star, as part of a campaign by More Than A Vote to amplify its efforts to fight voter suppression. James also cut an ad that ran during the NBA All-Star Game, which was played Sunday in Atlanta." 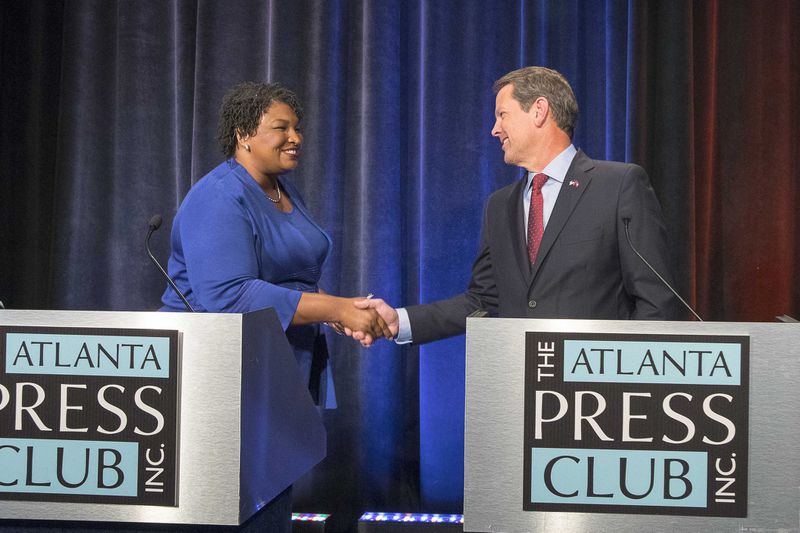 Abrams, who is expected to mount a rematch against Gov. Brian Kemp next year, described the Jan. 6 insurrection as an attempt by nationalists and white supremacists to overthrow an election in which “the wrong people got to vote.” The spirit of that attack on democracy, she said, is fueling the voter restriction measures now pending in 43 states across the nation.

“These are all bills about that same lie and that same belief system that drove them to the Capitol – that the wrong people are voting and that the only way to get our way is to shut them down and to shut them up,” she said.

“There should be not a single business owner in America who is allowed to be silent about the theft of the right to vote from any American, because that means you are standing with an ethos that was a near coup attempt in the United States. I know that sounds a bit overblown, but I can’t see it any other way.”

Greg Bluestein is a political reporter who covers the governor's office and state politics for The Atlanta Journal-Constitution.