Opinion: Garland’s caution is an asset when it comes to holding Trump accountable 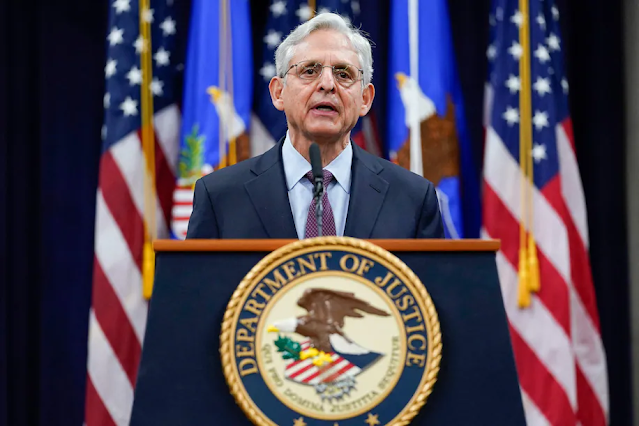 "Two speeches last week, one from President Biden, the other from Attorney General Merrick Garland, should be reassuring to those who want justice and accountability for the violent events of Jan. 6, 2021 — and Donald Trump’s efforts to stage a coup.
Opinions to start the day, in your inbox. Sign up.
But the remarks were reassuring in different ways. And not everyone who welcomed Biden’s direct and eloquent indictment of Trump and his apologists within the Republican Party felt as warmly about Garland’s studiously restrained promise to “follow the facts — not an agenda or an assumption.”
The stark differences in tone and content can be explained straightforwardly: Biden’s tasks are, by the broadest definition, political. Garland’s task is precisely to keep politics out of prosecutorial decisions.
Biden’s bracing speech from the site of the attack showed he understands that he had no alternative but to confront, publicly and forcefully, the metastasizing anti-democratic movement ignited by Trump’s lies about the 2020 election.
Reps. Jason Crow and Susan Wild: We survived Jan. 6 locked in the House chamber. Will our democracy?
And this week in Atlanta, both Biden and Vice President Harris will speak out for federal legislation to counter one of the dangerous outgrowths of that movement: the attack on voting rights in many Republican-led states.
Garland’s responsibilities are structurally more complicated because he has both a policy role and a prosecutorial function.
In his speech, speech, Garland was forceful on policy. He detailed the ongoing attacks on the right to vote and how Supreme Court decisions had “drastically weakened” the Justice Department’s ability to contain them. It was “essential,” Garland argued, “that Congress act to give the department the powers we need to ensure that every eligible voter can cast a vote that counts.”
But when it comes to the possibility of prosecuting Trump, we should welcome the fact that Garland is not talking about what, if anything, he is doing. Recall that progressives and Democrats were rightly enraged in 2019 when then-Attorney General William P. Barr publicly distorted the findings of special counsel Robert S. Mueller III’s inquiry and quickly dismissed the prospect of prosecuting Trump.
They were also angry when then-FBI Director James B. Comey, in announcing his 2016 decision not to prosecute Hillary Clinton in connection with her use of a private email server, also (inappropriately) chose to go on and on about the case. He criticized Clinton, during the presidential campaign, for being “extremely careless” and called her use of a private server “especially concerning.”
Comey’s job in the Clinton case was in law enforcement, not commentary. The same is true of Garland where Trump is concerned. Yes, the attorney general could announce that he is investigating Trump — if he is. But given how extraordinary indicting a former president would be, are we not better off with the standard Garland articulated? “We will and we must speak,” he said, “through our work.”
Nonetheless, Garland does have to take seriously not only that Trump clearly abused his power but also that he might have done so in a criminal way. Writing in The Post last August, legal scholars Laurence H. Tribe, Barbara McQuade and Joyce White Vance itemized potential crimes Trump may have committed in the course of his efforts to overturn the election.
Laurence H. Tribe, Barbara McQuade and Joyce White Vance: Here's a roadmap for the Justice Department to follow in investigating Trump
They included defrauding the United States by interfering with governmental functions, obstruction of an official proceeding, racketeering, inciting insurrection and seditious conspiracy. Trump might also have violated the federal voter fraud statute and coerced federal employees to violate the Hatch Act, which limits the political activities of civil servants.
In deciding what to do about Trump’s offenses, Garland confronts two concerns that are legitimate — and in tension. There is genuine worry about what it would mean for the U.S. democratic system if a former president were indicted by the administration of his successor — a successor who had defeated him at the polls. But ex-presidents, like everyone else, need to be held accountable for crimes.
George T. Conway III: Trump must have his day in court for Jan. 6
In a balancing test, accountability should prevail, and we should remember that it’s Republicans who, in opposing Trump’s impeachment, argued that he could face criminal indictment after he left office.
“We have a criminal justice system in this country,” Senate Minority Leader Mitch McConnell (R-Ky.) said last February. “We have civil litigation. And former presidents are not immune from being held accountable by either one.”
My hope is that Garland takes the words of the man who unfairly blocked his way to the Supreme Court seriously and investigates whether Trump violated the law. Similarly, the House investigators into the events of Jan. 6 should make criminal referrals to the Justice Department if they find evidence that Trump broke federal statutes.
But if Trump is to be indicted, we are better off with an attorney general who is widely seen as cautious, not reckless. Garland is committed to the idea that “there cannot be different rules depending on one’s political party or affiliation … different rules for friends and foes … different rules for the powerful and the powerless.” When you think about it, that’s the antithesis of Trumpism."
Opinion | Garland’s caution is an asset when it comes to holding Trump accountable - The Washington Post
Posted by John H Armwood II at 6:11 AM