Bill Cosby is not your father and never was OPINION: Once we accept the fact that Cosby is not Black America's father, much of the discussion around his history of abuse and sexual assault will be rendered pointless.

Bill Cosby is not your father and never was

“OPINION: Once we accept the fact that Cosby is not Black America's father, much of the discussion around his history of abuse and sexual assault will be rendered pointless.

I was not surprised when Bill Cosby was released from jail this week after having only served two years for three counts of sexual assault. The fact that he was released due to prosecutorial misconduct is quite honestly secondary to the fact that he has enough wealth, power and influence to exploit the incompetence of state prosecutors.

Rich people, even rich Black people, can always find a way to game a legal system that was never intended to work in favor of the poor or dispossessed anyway. What’s more important about Bill Cosby’s release, however, is the conversation it reignites in the Black community as we try to reconcile our notions of sexuality, gender, power and, most importantly, fatherhood.

Bill Cosby is not Black America’s Father, and never was. Once we accept that fact, much of the discussion around his history of abuse and sexual assault will be rendered pointless.

White colonizers fundamentally screwed up what enslaved people thought of fatherhood. Some West Africans enslaved in the Americas were from patrilineal and some came from matrilineal societies; meaning the way that power, property and position could come from one’s mother or one’s father. With a combination of warped Christianity and White supremacy, enslavers created an absolutely bizarre notion of patrimony and fatherhood that was both inaccessible and absolutely destructive to the Black man in America.

White Christianity gave enslaved Black folks an image of the Father/God/White man that was indistinguishable from each other. God was the Father and the ruler of mankind, White men were superior, and closer to God and thus inherited his dominion over all property, whether that was land, resources or a woman’s body. As the embodiment of God on Earth, the White man taught enslaved people that he had the right to do anything to acquire or protect his property, through force, torture or subterfuge.

In other words, fatherhood in America was a high bar that required a dint of divine right and pale skin. Black men, who couldn’t protect property — whether that be their land or wives’ bodies — from White violence were by nature, incapable of being fathers. And the legal and penal system of America was constructed to perpetuate this idea. So while American history is full of amazing, loving, loyal and powerful fathers, we had very few examples in popular culture of Black fatherhood that matched all of the ridiculous criteria that White supremacy foisted upon us, until Cliff Huxtable.

Cliff Huxtable was the first Black man in popular culture that embodied fatherhood in the way that only White men had demonstrated for centuries. He owned his house, he protected his family from Whiteness, be that in the form of direct violence, harassment or sexual pursuit (notice how not one of the Cosby kids ever dated interracially — something that would be almost impossible for a Black sitcom to get away with today).

Lastly, Cliff Huxtable had dominion over his wife socially and sexually, even if the tension of the show gave lip service to the idea that Claire ran the house. This is a toxic, sexist notion of fatherhood but it is the prevailing idea in American society, one that Black people desperately wanted to participate in after having been denied an example for so long.

In the early 2000s when allegations surfaced that Cosby the man had multiple affairs and possibly sired children out of wedlock and ultimately landed behind bars after repeated allegations that he sexually assaulted and drugged women, many in Black America ran to their father’s defense. Despite him repeatedly disappointing us, we refused to believe it. We were trauma bonded to him like a child that cries for their father to be released from jail, despite him being put away for child abuse.

Despite everything from Ralph Kramden on the Honeymooners to Ray Romano today, Cosby remained the other father many of us would ever know (although I’d argue that for some Zoomers, their father is Julius from Everybody Hates Chris, or Dre from Black-ish, which is why they are much less bothered by the Cosby allegations). 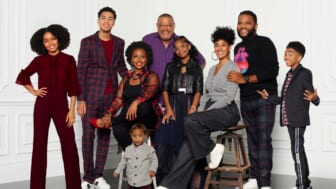 Celebrity defenders of Bill Cosby don’t surprise me, they have a vested interest either financially or reputationally to be in his orbit. His longtime co-star Phylicia Rashad almost fumbled the bag of being Howard University’s new dean of Arts and Theater this fall when she posted praise and support for Cosby being released from prison. Speaking of Bag Ladies, Erykah Badu and Jill Scott took hits for supporting Cosby over the years as well, but they’re all stars and have their own motivations.

What has always been a problem are the regular men and women, trauma bonded to Bill Cosby the man because they desperately need to believe in Cliff Huxtable the father. If Bill Cosby hadn’t played the iconic Cliff Huxtable for the better part of a decade you know who he’d be? Harvey Weinstein, Louis C.K., Kevin Spacey, or Chauncey Billups — just another famous actor or entertainer who did terrible things that the public would believe or not believe in based on the evidence that went public.

The vociferous defense of Cosby is because too many people want him to be something that he never had been. Some of Black America’s collective daddy issues can of course be traced back to White supremacy but rest assured that the kind of father that we’ve been begging for is a figment. He’s an empowered diety based on outdated notions of love, gender and finance.

The White Daddy that many have wanted to see in Black face has been revealed yet again, to be a Scooby-Doo level villain whose mask has been taken off and it’s up to us to collectively realize that Father/God/White man in Black face was never real to begin with.

Cliff Huxtable was a respectable rich Black man’s notion of what White America had never seen as a strong Black father. Bill Cosby is a powerful Black man with the money and resources to abuse women and pay skillful lawyers to get him out of trouble. You can enjoy Cliff Huxtable, but Bill Cosby never took you to school, taught you how to tie a tie, nor picked you up after your basketball team lost the state championship and took you out for ice cream. Some of us need to stop giving him credit like he did.

Dr. Jason Johnson is a professor of Politics and Journalism at Morgan State University, a Political Contributor at MSNBC and SIRIUS XM Satellite Radio. Notorious comic book and sports guy with dual Wakandan and Zamundan citizenship.”