Opinion | Raphael Warnock and the Legacy of Racial Tyranny

Opinion | Raphael Warnock and the Legacy of Racial Tyranny 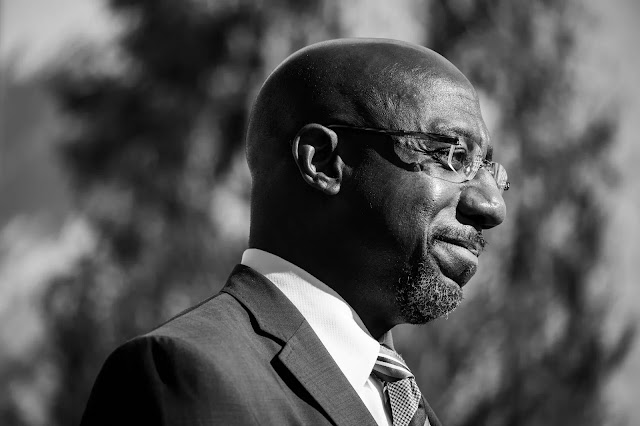 Lost in the horror and mayhem of the Jan. 6 Capitol riot was another momentous event that happened barely 12 hours earlier and hundreds of miles away: the election to the Senate of the Rev. Raphael Warnock of Georgia, the first Black Democratic senator from the South in the nation’s history.

Mr. Warnock’s triumph, along with that of Jon Ossoff, who won the other Georgia runoff on that Tuesday night, gave Democrats the Senate majority they lost in 2014, and full control of Congress for the first time in a decade.

That was the salient political fact, at least before the insurrection began. But the proximity of those two events — the election of a Black man to the Senate followed hard on by the violent ransacking of the Capitol by an overwhelmingly white mob — rang loudly with echoes of the past.

A little more than 150 years ago, on the afternoon of Feb. 25, 1870, America’s first Black senator, Hiram Rhodes Revels, a Republican from Mississippi, sat on the floor of the Senate preparing to take his oath of office.

“There was not an inch of standing or sitting room in the galleries, so densely were they packed,” this newspaper reported in the following day’s edition. “To say that the interest was intense gives but a faint idea of the feeling which prevailed throughout the entire proceeding.”

Revels was, like Mr. Warnock, a preacher, ordained by the African Methodist Episcopal Church. He had been raised in North Carolina and served as a chaplain to a Black regiment during the Civil War. He was elected to the Mississippi State Senate in 1869, part of a wave of Black lawmakers who took office throughout the South during Reconstruction.

In 1870, the State Legislature chose Revels to fill one of Mississippi’s two U.S. Senate seats, both of which had been abandoned several years earlier, when the state seceded. It was a bold and unapologetic statement that Black Americans — Black men, anyway — were the political equals of whites, and were entitled to hold office alongside them.

But the wounds of the Civil War were still fresh, and Southern whites were furious at being forced to share power with the people they had so recently enslaved. Before Revels could raise his right hand, the objections began raining down. George Vickers, a Democrat from Maryland, argued that Revels was ineligible to serve because the Constitution requires a senator to have been an American citizen for at least nine years. According to the Supreme Court’s 1857 ruling in Dred Scott v. Sandford, Black people could never be citizens. While the 14th Amendment, ratified in 1868, effectively negated that ruling, Vickers contended — with a dose of birtherism that would make Donald Trump proud — Revels had therefore only been a citizen for two years.

Revels’s backers argued that he was in fact a lifelong citizen of the United States, because he was born to free Black parents.

After more objections and heated debate, the efforts to block Revels’s admission were voted down by the antislavery Republicans who dominated the Senate. “When the Vice-President uttered the words, ‘The Senator elect will now advance and take the oath,’ a pin might have been heard drop,” The Times wrote. “Mr. Revels showed no embarrassment whatever, and his demeanor was as dignified as could be expected under the circumstances. The abuse which had been poured upon him and on his race during the last two days might well have shaken the nerves of any one.”

Senator Charles Sumner of Massachusetts spoke up in Mr. Revels’s defense. “All men are created equal, says the great Declaration,” he said, but “the Declaration was only half established by Independence. The greatest duty remained behind. In assuring the equal rights of all we complete the work.”

The rioters incited by President Trump and Republicans to storm the seat of the federal government on Jan. 6 did not have Mr. Warnock’s name on their lips. They didn’t have to. In their eagerness to destroy American democracy rather than share it, they showed themselves to be the inheritors of a long tradition of rebellion against a new world order: a genuine, multiracial democracy.

Reconstruction was the first attempt to make that world order a reality, and it succeeded remarkably for a few years, as evidenced by the election of leaders like Hiram Revels. But it soon collapsed as the federal government gave up and pulled troops out of the South, leaving Black people at the mercy of vengeful state governments intent on re-establishing white supremacy.

In the Jim Crow era that followed, millions of Black Americans were erased from American political life. They may have technically counted as five-fifths of a person, rather than three-fifths as the Constitution had originally set out, but they were no more able to participate in their own governance than their enslaved forebears had been. Those who tried to take part faced everything from poll taxes and literacy tests to campaigns of terrorism and state-sanctioned murder. By the first decades of the 20th century, Black voter registration had fallen into the low single digits across much of the South.

That racist, anti-democratic regime was brought down only by the civil rights movement of the mid-20th century, led at its apex by the Rev. Dr. Martin Luther King Jr. Historians often refer to this time as a second Reconstruction, because it wasn’t until the passage of the Civil Rights Act of 1964 and the Voting Rights Act of 1965 that the United States could claim to be anything resembling a true representative democracy. But this second Reconstruction, like the first, faced reactionary backlash from the start. That backlash has found expression primarily in the Republican Party, which had by then abandoned its abolitionist roots — from Richard Nixon’s Southern strategy to Ronald Reagan’s race-baiting dog whistles to the openly racist campaign and presidency of Donald Trump.

If Mr. Trump’s victory in 2016, following the eight-year tenure of the nation’s first Black president, was a symbolic assault on the ideal of a multiracial democracy, the riot he incited at the Capitol on Jan. 6 made that assault literal.

There will be no new Jim Crow regime, but the effort to preserve white political domination continues. Republican lawmakers have been working for years to make it harder, if not impossible, for Black voters — who vote roughly 9 to 1 for Democrats — to register and cast their ballots. While no state caved to the outrageous pressure from Mr. Trump to reject its popular vote in favor of Joe Biden and give its electors to him, many states are already debating legislation to cut back access to voting and to strengthen voter ID requirements, both of which would hurt Black voters disproportionately.

Those voters were critical to the Democrats’ victories in Georgia, and their showing up despite the obstacles placed in their way has ensured that Mr. Warnock and Mr. Ossoff will be sworn in over the coming days. But it is clearer than ever that as America approaches 250 years since the signing of the Declaration of Independence, the nation’s work of assuring equal rights for all is far from complete. As in 1870, the greatest duty still remains before us.“

Opinion | Raphael Warnock and the Legacy of Racial Tyranny
Posted by John H Armwood II at 3:59 AM