Opinion | The potential charges against Donald Trump - The Washington Post 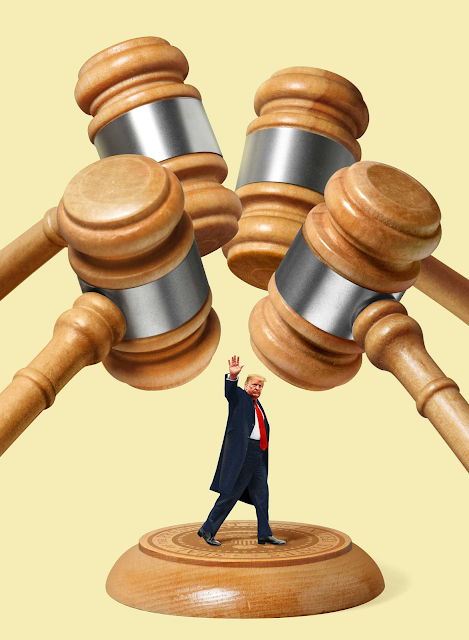 "The question came out of the blue and has haunted me ever since. It was Jan. 17, 2017, three days before Donald Trump’s swearing-in, and my wife and I sat with him in the near-empty main cabin aboard the Trump Organization’s Boeing 757 en route to Washington for a pre-inaugural gala.

So, asked the president-elect: Should he retain or fire Preet Bharara, the U.S. attorney for the powerful Southern District of New York? I gave what I thought was an obvious, anodyne answer: All other things being equal, it’s better to have your own people in place. Within two months, Bharara was gone.

George T. Conway III, a Post contributing columnist, is a lawyer and a co-founder of the Lincoln Project, an anti-Trump super PAC.

To the charge of naivete that night, I plead guilty: I didn’t consider then that Trump might have had his personal legal interests in mind. But it is impossible to escape the self-interested intent behind his question. From the earliest days of his administration, it became painfully apparent that in all matters — including affairs of state — Trump’s personal well-being took top priority. Four years and two impeachments later, he has managed to avoid the full consequences of his conduct.

But now that run of legal good fortune may end. Trump departed the White House a possible — many would say probable, provable — criminal, one who has left a sordid trail of potential and actual misconduct that remains to be fully investigated.

As Trump himself well understands. Long-standing Justice Department opinions hold that presidents can’t be prosecuted while they are in office. Given that any such protection was temporary, some of Trump’s advisers believed that one reason he decided to seek reelection was to avoid criminal exposure. Indeed, in the weeks leading up to November’s election, Trump reportedly confessed to advisers that he was worried about being prosecuted."

Opinion | The potential charges against Donald Trump - The Washington Post
Posted by John H Armwood II at 11:02 AM