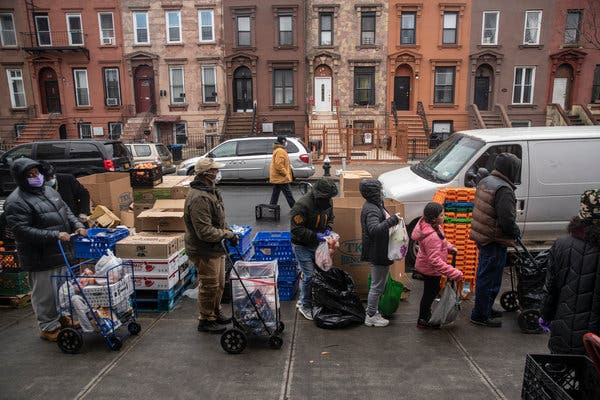 "Social Distancing Is a Privilege

The idea that this virus is an equal-opportunity killer must itself be killed.

People like to say that the coronavirus is no respecter of race, class or country, that the disease Covid-19 is mindless and will infect anybody it can.

In theory, that is true. But, in practice, in the real world, this virus behaves like others, screeching like a heat-seeking missile toward the most vulnerable in society. And this happens not because it prefers them, but because they are more exposed, more fragile and more ill.

What the vulnerable portion of society looks like varies from country to country, but in America, that vulnerability is highly intersected with race and poverty.

Early evidence from cities and states already shows that black people are disproportionately affected by the virus in devastating ways. As ProPublica reported, in Milwaukee County, Wis., as of Friday morning, 81 percent of the deaths were black people. Black people make up only 26 percent of that county.

The Detroit News reported last week, “At least 40 percent of those killed by the novel coronavirus in Michigan so far are black, a percentage that far exceeds the proportion of African-Americans in the Detroit region and state.”

If this pattern holds true across other states and cities, this virus could have a catastrophic impact on black people in this country.

And yet, we are still not seeing an abundance of news coverage or national governmental response that center on these racial disparities. Many states haven’t even released race-specific data on cases and deaths. The federal government hasn’t either.

Partly for this reason, we are left with deceptive and deadly misinformation. The perception that this is a jet-setters’ disease, or a spring breakers’ disease, or a “Chinese virus” as President Trump likes to say, must be laid to rest. The idea that this virus is an equal-opportunity killer must itself be killed.

And, we must dispense with the callous message that the best defense we have against the disease is something that each of us can control: We can all just stay home and keep social distance.

As a report last month by the Economic Policy Institute pointed out, “less than one in five black workers and roughly one in six Hispanic workers are able to work from home.”

If you touch people for a living, in elder care or child care, if you cut or fix their hair, if you clean their spaces or cook their food, if you drive their cars or build their houses, you can’t do that from home.

The people who can’t must make terrible choices: Stay home and risk starvation or go to work and risk contagion.

And, this isn’t just happening here, it is happening with poor people around the world, from New Delhi to Mexico City.

If they go to work, they must often use crowded mass transportation, because low-wage workers can’t necessarily afford to own a car or call a cab.

Such is the life of the working poor, or those slightly above poverty, but still struggling. Our entire discussion around this virus is stained with economic elitism. In social media commentary about images of packed buses and crowds of delivery workers outside restaurants, people chastise black and brown people for not always being inside, but many of those doing the chastising do so from comfortable homes with sufficient money and food.

People can’t empathize with what it truly means to be poor in this country, to live in a too-small space with too many people, to not have enough money to buy food for a long duration or anywhere to store it if they did. People don’t know what it’s like to live in a food desert where fresh fruit and vegetables are unavailable and nutrient-deficient junk food is cheap and exists in abundance.

People are quick to criticize these people for crowding into local fast food restaurants to grab something to eat. Not everyone can afford to order GrubHub or FreshDirect.

Furthermore, in a nation where too many black people have been made to feel that their lives are constantly under threat, the existence of yet another produces less of a panic. The ability to panic becomes a privilege existing among those who rarely have to do it.

I wholeheartedly encourage everyone who can to stay home, but I’m also aware enough to know that not everyone can or will, and that it is not simply a pathological disregard for the common good.

If you are sheltering in place in an ivory tower, or even a comfortable cul-de-sac or a smartly well-appointed apartment, and your greatest concern is boredom and leftover food, please stop scolding those scratching to survive."

Opinion | Social Distancing During the Coronavirus Pandemic Is a Privilege - The New York Times
Posted by John H Armwood II at 9:04 AM