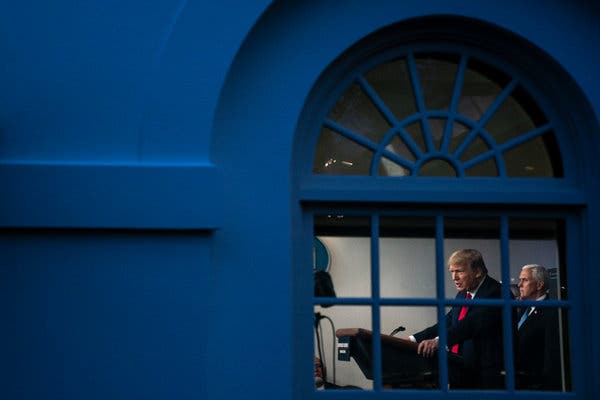 "With his poll numbers fading after a rally-around-the-leader bump, the president is stoking protests against stay-at-home orders.

First he was the self-described “wartime president.” Then he trumpeted the “total” authority of the federal government. But in the past few days, President Trump has nurtured protests against state-issued stay-at-home orders aimed at curtailing the spread of the coronavirus.

Hurtling from one position to another is consistent with Mr. Trump’s approach to the presidency over the past three years. Even when external pressures and stresses appear to change the dynamics that the country is facing, Mr. Trump remains unbowed, altering his approach for a day or two, only to return to nursing grievances.

Not even the president’s re-election campaign can harness him: His team is often reactive to his moods and whims, trying but not always succeeding in steering him in a particular direction. Now, with Mr. Trump’s poll numbers falling after a rally-around-the-leader bump, he is road-testing a new turn on a familiar theme — veering into messages aimed at appealing to Americans whose lives have been disrupted by the legally enforceable stay-at-home orders.

Whether his latest theme will be effective for him is an open question: In an NBC/Wall Street Journal poll released on Sunday, just 36 percent of voters said they generally trusted what Mr. Trump says about the coronavirus.

But the president, who ran as an insurgent in 2016, is most comfortable raging against the machine of government, even when he is the one running the country. And while the coronavirus is in every state in the union, it is heavily affecting minority and low-income communities.

So when Mr. Trump on Friday tweeted “LIBERATE,” his all-capitalized exhortations against strict orders in specific states — including Michigan — were in keeping with how he ran in 2016: saying things that seem contradictory, like pledging to work with governors and then urging people to “liberate” their states, and leaving it to his audiences to hear what they want to hear in his words.

For instance, Mr. Trump did not take the opportunity to more forcefully encourage the protesters when he spoke with reporters on Friday.

“These are people expressing their views,” Mr. Trump said. “They seem to be very responsible people to me.” But he said he thought the protesters had been treated “rough.”

In a webcast with Students for Trump on Friday, a conservative activist and Trump ally, Charlie Kirk, echoed the message, encouraging a “peaceful rebellion against governors” in states like Michigan, according to ABC News.

On Fox News, where many of the opinion hosts are aligned with Mr. Trump and which he watches closely, there have also been discussions of such protests. And Mr. Trump has heard from conservative allies who have said they think he is straying from his base of supporters in recent weeks.

So far, the protests have been relatively small and scattershot, organized by conservative-leaning groups with some organic attendance. It remains to be seen if they will be durable.

But Mr. Trump’s show of affinity for such actions is in keeping with his fomenting of voter anger at the establishment in 2016, a key to his success then — and his fallback position during uncertain moments ever since.

In the case of the state-issued orders, Mr. Trump’s advisers say his criticism of certain places is appropriate.

Stephen Moore, a former adviser to Mr. Trump and an economist with FreedomWorks, an organization that promotes limited government, said he thought protesters ought to be wearing masks and protecting themselves. But, he added, “the people who are doing the protest, for the most part, these are the ‘deplorables,’ they’re largely Trump supporters, but not only Trump supporters.”

On Sunday, Mr. Trump again praised the protesters. “I have never seen so many American flags,” he said.

But Mr. Trump’s advisers are divided about the wisdom of encouraging the protests. At some of them, Gov. Gretchen Whitmer of Michigan, a Democrat, has been compared to Adolf Hitler. At least one protester had a sign featuring a swastika.

One adviser said privately that if someone were to be injured at the protests — or if anyone contracted the coronavirus at large events where people were not wearing masks — there would be potential political risk for the president.

But two other people close to the president, who asked for anonymity in order to speak candidly, said they thought the protests could be politically helpful to Mr. Trump, while acknowledging there might be public health risks.

One of those people said that in much of the country, where the numbers of coronavirus cases and deaths are not as high as in places like New York, New Jersey, California and Washington State, anger is growing over the economic losses that have come with the stringent social-distancing restrictions.

And some states are already preparing to restart their economies. Ohio, where Gov. Mike DeWine, a Republican, took early actions against the spread of the virus, is planning a staged reopening beginning on May 1.

Still, as Mr. Trump did throughout 2016, as when he said “torture works” and then walked back that statement a short time later, or when he advocated bombing the Middle East while denouncing lengthy foreign engagements, he has long taken various sides of the same issue.

Mobilizing anger and mistrust toward the government was a crucial factor for Mr. Trump in the last presidential election. And for many months he has been looking for ways to contrast himself with former Vice President Joseph R. Biden Jr., the presumptive Democratic presidential nominee and a Washington lifer.

The problem? Mr. Trump is now president, and disowning responsibility for his administration’s slow and problem-plagued response to the coronavirus could prove difficult. And protests can be an unpredictable factor, particularly at a moment of economic unrest.

“The American people know that no one in America wants to reopen this country more than President Donald Trump,” Mr. Pence said, “and on Thursday the president directed us to lay out guidelines for when and how states could responsibly do that.”

“And in the president’s tweets and public statements, I can assure you, he’s going to continue to encourage governors to find ways to safely and responsibly let America go back to work,” he said.

With the political campaign halted, Mr. Trump’s advisers have seen an advantage in the frozen-in-time state of the race. Mr. Biden has struggled to fund-raise or even to get daily attention in the news cycle.

But Mr. Trump himself has seemed at sea, according to people close to him, uncertain of how to proceed. His approval numbers in his campaign polling have settled back to a level consistent with before the coronavirus, according to multiple people familiar with the data.

His campaign polling has shown that focusing on criticizing China, in contrast with Mr. Biden, moves voters toward Mr. Trump, according to a Republican who has seen it.

“Trump finally fired the first shot” with his more aggressive stance toward the Chinese government and its leader, Xi Jinping, said Stephen K. Bannon, Mr. Trump’s former chief strategist. “Xi is put on notice that the death, economic carnage and agony is his and his alone,” Mr. Bannon said. “Only question now: What is America’s president prepared to do about it?”

Mr. Trump’s campaign manager, Brad Parscale, has advocated messages that contrast Mr. Trump with Mr. Biden on a number of fronts, including China.

But inside and outside the White House, other advisers to Mr. Trump see an advantage in focusing attention on the presidency.

Kellyanne Conway, the White House counselor, has argued in West Wing discussions that there is a time to focus on China, but that for now, the president should embrace commander-in-chief moments amid the crisis.

Chris Christie, the former governor of New Jersey and a friend of Mr. Trump’s, said on ABC’s “This Week” that he did not think ads criticizing Mr. Biden on China were the right approach for now.

Ultimately, Mr. Trump’s advisers said, most of his team is aware that it can try to drive down Mr. Biden’s poll numbers, but that no matter what tactics it deploys now, the president’s future will most likely depend on whether the economy is improving in the fall and whether the virus’s spread has been mitigated. Those things will remain unknown for months.

“This is going to be a referendum,” Mr. Christie said, “on whether people think, when we get to October, whether or not he handled this crisis in a way that helped the American people, protected lives and moved us forward.”

Trump, Head of Government, Leans Into Antigovernment Message - The New York Times
Posted by John H Armwood II at 9:28 AM