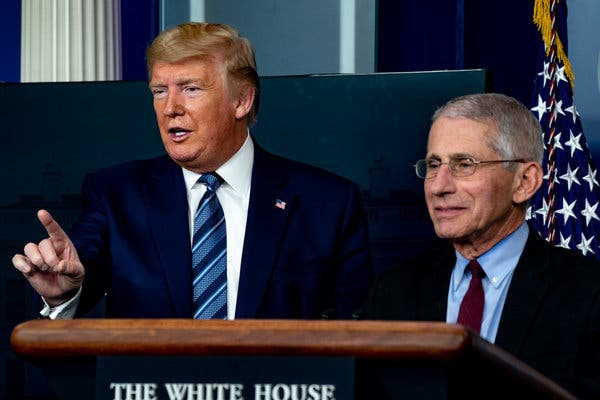 The president’s advocacy of the anti-malarial drug has created tensions in his administration, and fears among doctors that it could unnecessarily expose patients to risks.

President Trump doubled down Sunday on his push for the use of an anti-malarial drug against the coronavirus, issuing medical advice that goes well beyond scant evidence of the drug’s effectiveness as well as the advice of doctors and public health experts.

Mr. Trump’s recommendation of hydroxychloroquine, for the second day in a row at a White House briefing, was a striking example of his brazen willingness to distort and outright defy expert opinion and scientific evidence when it does not suit his agenda.

Standing alongside two top public health officials who have declined to endorse his call for widely administering the drug, Mr. Trump suggested that he was speaking on gut instinct and acknowledged that he had no expertise on the subject.

Saying that the drug is “being tested now,” Mr. Trump said that “there are some very strong, powerful signs” of its potential, although health experts say that the data is extremely limited and that more study of the drug’s effectiveness against the coronavirus is needed.

“If it does work, it would be a shame we did not do it early,” Mr. Trump said, noting again that the federal government had purchased and stockpiled 29 million pills of the drug. “We are sending them to various labs, our military, we’re sending them to the hospitals.”

Mr. Trump, who once predicted that the virus might “miraculously” disappear by April because of warm weather, and who has rejected scientific consensus on issues like climate change, was undaunted by skeptical questioning.

“What do you have to lose?” Mr. Trump asked, for the second day in a row, saying that terminally ill patients should be willing to try any treatment that has shown some promise.

When a reporter at Sunday’s briefing asked Dr. Anthony S. Fauci, the director of the National Institute of Allergy and Infectious Diseases, to weigh in on the subject, Mr. Trump stopped him from answering. As the reporter noted that Dr. Fauci, who has been far more skeptical about the drug’s potential, was the president’s medical expert, Mr. Trump made it clear he did not want the doctor to answer.

“You know how many times he’s answered that question? Maybe 15 times,” the president said, stepping toward the lectern where Dr. Fauci was standing.

Even as Mr. Trump has promoted the drug, which is also often prescribed for patients with lupus, it has created rifts within his own coronavirus task force. And while many hospitals have chosen to use hydroxychloroquine in a desperate attempt to treat dying patients who have few other options, others have noted that it carries serious risks. In particular, the drug can cause a heart arrhythmia that can lead to cardiac arrest.

Dr. Megan L. Ranney, an emergency physician at Brown University in Rhode Island, said in an interview on Sunday night that she had never seen an elected official advertise a miracle cure the way Mr. Trump has.

“There are side effects to hydroxychloroquine,” Dr. Ranney said. “It causes psychiatric symptoms, cardiac problems and a host of other bad side effects.”

Dr. Ranney said that the drug could be effective for some patients, but that there was not nearly enough scientific evidence to support Mr. Trump’s claims.

“There may be a role for it for some people,” she said, “but to tell Americans ‘you don’t have anything to lose,’ that’s not true. People certainly have something to lose by taking it indiscriminately.”

Hydroxychloroquine has not been proved to work against Covid-19 in any significant clinical trials. A small trial by Chinese researchers made public last week found that it helped speed the recovery in moderately ill patients, but the study was not peer-reviewed and had significant limitations. Earlier reports from France and China have drawn criticism because they did not include control groups to compare treated patients with untreated ones, and researchers have called the reports anecdotal. Without controls, they said, it is impossible to determine whether the drugs worked.

Sign up to receive our daily Coronavirus Briefing, an informed guide with the latest developments and expert advice.

But Mr. Trump on Sunday dismissed the notion that doctors should wait for further study.

“We don’t have time to go and say, ‘Gee, let’s take a couple of years and test it out,’ and let’s go out and test with the test tubes and the laboratories,” Mr. Trump said. “I’d love to do that, but we have people dying today.”

Mr. Trump is typically joined at his briefings by top medical advisers, including Dr. Fauci and Dr. Deborah L. Birx, his coronavirus coordinator. But the president does most of the talking, and has told several advisers that the briefings give him free airtime and good ratings.

A day earlier, Dr. Fauci had privately challenged rising optimism about the drug’s efficacy during a meeting of the coronavirus task force in the White House’s Situation Room, according to two people familiar with the events who spoke on the condition of anonymity to describe a conversation in a sensitive setting. The argument was first reported by the website Axios.

The meeting’s agenda included the question of how the administration would discuss chloroquines. Dr. Stephen Hahn, the Food and Drug Administration commissioner, gave an update on chloroquines, and what various tests and anecdotal evidence had shown. Peter Navarro, the president’s trade adviser who is overseeing supply chain issues related to the coronavirus, asked to join the meeting, said the people briefed on what took place.

Mr. Navarro, who has been pushing to secure chloroquines at the president’s request to provide to caregivers, walked in with a sheaf of folders he had placed on a chair next to him, plopped them on the table and said he had seen studies from various countries, as well as information culled from officials at the Centers for Disease Control and Prevention, showing the “clear” efficacy of the drug in treating the coronavirus. Mr. Navarro also argued that the medicine was being used by doctors and nurses on the front lines of the coronavirus fight.

Dr. Fauci pushed back, echoing remarks he has made in interviews in the past week that rigorous study is still necessary. Mr. Navarro, an economist by training, shot back that the information he had collected was “science,” according to the people familiar with the episode.

Vice President Mike Pence tried to tamp down the debate, and as emotions calmed, Mr. Trump’s son-in-law and senior adviser, Jared Kushner, advised Mr. Navarro to “take yes for an answer.” The president went to the briefing room lectern a short while later and glowed about chloroquine use, suggesting he might even take it himself despite not having symptoms or evidence of the virus.

Katie Miller, a spokeswoman for Mr. Pence, declined to comment, saying the administration does not discuss events in the Situation Room.

Hydroxychloroquine is generally used as an anti-malarial drug.

Last month, an Arizona man died and his wife was hospitalized after officials said they treated themselves with a deadly home remedy for the coronavirus — a popular fish tank additive that has the same active ingredient as an anti-malaria drug.

Medical professionals are also concerned that a run on hydroxychloroquine for potential coronavirus treatment could create shortages for people who need it for its traditional uses.

In a March 25 joint statement, the American Medical Association and two pharmacists’ associations noted that doctors and pharmacists have been prescribing the drug for their families and colleagues and that some pharmacies and hospitals had purchased “excessive amounts of these medications in anticipation of potentially using them for Covid-19 prevention and treatment.”

“The organizations strongly oppose these actions,” the statement said, citing potential “grave consequences for patients with conditions such as lupus or rheumatoid arthritis if the drugs are not available in the community.”

Since patients with heart troubles and other underlying conditions are more likely to be severely affected by the coronavirus, they may also be at higher risk of dangerous side effects from hydroxychloroquine, said Dr. Kenneth B. Klein, a consultant who works for drug companies to design and evaluate their clinical trials.

“What have we got to lose?” Dr. Klein said, echoing Mr. Trump’s remarks. “We’ve got patients to lose from dangerous side effects.”

Mr. Trump did mention the potential risks to patients with heart troubles, but Dr. Klein said that even people with normal hearts are at risk for developing a fatal arrhythmia. And he said other medications could interact with hydroxychloroquine and cause serious medical complications.

“Then the doctor would have to spend time thinking, could this drug be playing a role, either directly or indirectly?” Dr. Klein said.

Other researchers have noted that while future trials may show a benefit, hydroxychloroquine has disappointed in the past, even though it has been tested as a treatment for other viruses, including influenza.

“Hydroxychloroquine has been studied as a possible antiviral therapy for many decades,” said Dr. Luciana Borio, who oversaw public health preparedness for the National Security Council in Mr. Trump’s White House and was the acting chief scientist at the F.D.A. under President Barack Obama."