Opinion | The Horrible History of Thanksgiving - The New York Times 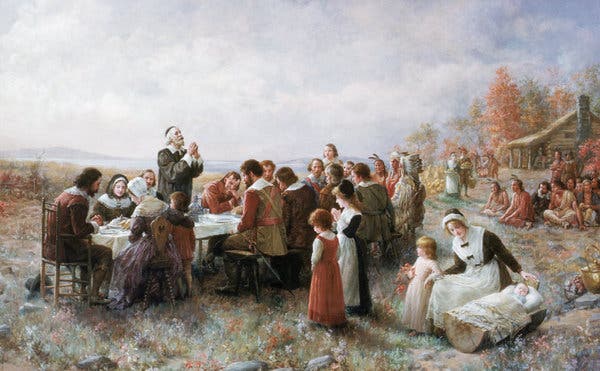 "The Horrible History of Thanksgiving

When I was a child, Thanksgiving was simple. It was about turkey and dressing, love and laughter, a time for the family to gather around a feast and be thankful for the year that had passed and be hopeful for the year to come.

In school, the story we learned was simple, too: Pilgrims and Native Americans came together to give thanks.

We made pictures of the gathering, everyone smiling. We colored turkeys or made them out of construction paper. We sometimes had a mini-feast in class.

I thought it was such a beautiful story: People reaching across race and culture to share with one another, to commune with one another. But that is not the full story of Thanksgiving. Like so much of American history, the story has had its least attractive features winnow away — white people have been centered in the narrative and all atrocity has been politely papered over.

So, let us correct that.

What is widely viewed as the first Thanksgiving was a three-day feast to which the Pilgrims had invited the local Wampanoag people as a celebration of the harvest.

About 90 came, almost twice the number of Pilgrims. This is the first myth: that the first Thanksgiving was dominated by the Pilgrim and not the Native American. The Native Americans even provided the bulk of the food, according to the Manataka American Indian Council.

This is counter to the Pilgrim-centric view so often presented. Indeed, two of the most famous paintings depicting the first Thanksgiving — one by Jennie Augusta Brownscombe and the other by Jean Leon Gerome Ferris — feature the natives in a subservient position, outnumbered and crouching on the ground on the edge of the frame.

The Pilgrims had been desperate and sick and dying but had finally had some luck with crops.

The second myth is that the Wampanoag were feasting with friends. That does not appear to be true.

As Peter C. Mancall, a professor at the University of Southern California, wrote for CNN on Wednesday, Gov. William Bradford would say in his book “Of Plymouth Plantation,” which he began to write in 1630, that the Puritans had arrived in “a hideous and desolate wilderness, full of wild beasts and wild men.”

Mancall further explained that after the visits to the New World by Samuel de Champlain and Capt. John Smith in the early 1600s, “a terrible illness spread through the region” among the Native Americans. He continued: “Modern scholars have argued that indigenous communities were devastated by leptospirosis, a disease caused by Old World bacteria that had likely reached New England through the feces of rats that arrived on European ships.”

This weakening of the native population by disease from the new arrivals’ ships created an opening for the Pilgrims.

King James’s patent called this spread of disease “a wonderfull Plague” that might help to devastate and depopulate the region. Some friends.

As Grace Donnelly wrote in a 2017 piece for Fortune:

The celebration in 1621 did not mark a friendly turning point and did not become an annual event. Relations between the Wampanoag and the settlers deteriorated, leading to the Pequot War. In 1637, in retaliation for the murder of a man the settlers believed the Wampanoags killed, they burned a nearby village, killing as many as 500 men, women, and children. Following the massacre, William Bradford, the Governor of Plymouth, wrote that for “the next 100 years, every Thanksgiving Day ordained by a Governor was in honor of the bloody victory, thanking God that the battle had been won.”

Just 16 years after the Wampanoag shared that meal, they were massacred.

This was just one of the earliest episodes in which settlers and colonists did something horrible to the natives. There would be other massacres and many wars.

According to History.com, “From the time Europeans arrived on American shores, the frontier — the edge territory between white man’s civilization and the untamed natural world — became a shared space of vast, clashing differences that led the U.S. government to authorize over 1,500 wars, attacks and raids on Indians, the most of any country in the world against its indigenous people.”

And this says nothing of all the treaties brokered and then broken or all the grabbing of land removing populations, including the most famous removal of natives: the Trail of Tears. Beginning in 1831, tens of thousands of Native Americans were forced to relocate from their ancestral lands in the Southeast to lands west of the Mississippi River. Many died along the way.

I spent most of my life believing a gauzy, kindergarten version of Thanksgiving, thinking only of feasts and family, turkey and dressing.

I was blind, willfully ignorant, I suppose, to the bloodier side of the Thanksgiving story, to the more honest side of it.

But I’ve come to believe that is how America would have it if it had its druthers: We would be blissfully blind, living in a soft world bleached of hard truth. I can no longer abide that.

Opinion | The Horrible History of Thanksgiving - The New York Times
Posted by John H Armwood II at 11:16 AM