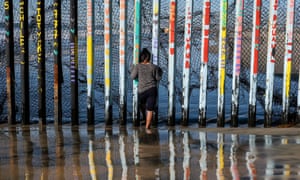 "The cruelty is the point

Immigration officials arrested almost 700 undocumented workers at a Mississippi food processing plant on Wednesday in the largest single-state workplace raid in US history. Hundreds of those workers are still locked up and their kids have been left traumatized and temporarily homeless.
“Children relied on neighbors and strangers to pick them up outside their homes after school,” Mississippi’s local WJTV reported. “They drove the children to a community center where people tried to keep them calm. But many kids could not stop crying for mom and dad.”
While kids were sobbing, government officials were celebrating. Tate Reeves, the lieutenant governor, congratulated Donald Trump on the raids, tweeting: “Glad to see that ICE is working hard to enforce our immigration laws. 680 aliens detained in Mississippi today. We must enforce our laws, for the safety of all Americans.”
It’s a little odd that Reeves is so jubilant about kids being separated from their parents because he’s spent a lot of time positioning himself as a protector of children. Earlier this year Reeves, who is running to be governor, launched a “pro-life” coalition made up of more than 150 pastors and anti-abortion activists across Mississippi. “I believe with great responsibility comes great opportunity,” Reeves said at the launch event. “We have an opportunity in this state to protect unborn children … Every single one of these babies is a gift from God.”
Strange, isn’t it, how so many of the anti-abortion brigade seem far more concerned with protecting unborn children than actually born children? Really confusing how they seem to think babies are a gift from God, but are happy to rip kids away from their parents and lock them in cages. It’s almost as if they’re not really pro-life at all, they’re just interested in controlling women’s bodies.
The hypocrisy of anti-abortion lawmakers gloating about taking hundreds of kids away from their parents should infuriate us all. What happened this week in Mississippi should also chill us to the bone. America’s immigration system was deeply unfair long before Trump took office – but the systematic cruelty and dehumanization we are witnessing now is terrifying. Immigration and Customs Enforcement (Ice) is state-sponsored terrorism: their job isn’t to make Americans safe, it is to strike fear into non-white Americans. As Reeves’s statement makes very clear, not everyone in America is considered an American, or even fully human. If you’re not white then you’re an alien, a criminal, a threat. As the Minnesota representative Ilhan Omar tweeted: “This is the language of dehumanization and its only logical end is violence.”

‘We need to go full witch’

Witchcraft is having a moment. “Whether it’s hexing the president, chatting in WhatsApp covens or featuring in TV reboots, radicalised women have been finding strength in the ancient pagan arts,” according to this bewitching piece in the Guardian. If anyone’s got a good hex, please let me know.

Women are less prepared for retirement than men

It’s not just a pay gap women have to deal with – there’s also a retirement savings gap. “Only 62% of women have a plan to help protect themselves against outliving their savings, versus 76% of men,” CNBC reports.

Surprise, surprise, the Dayton shooter was a misogynist

The 24-year-old man who killed nine people in Ohio last weekend reportedly had a history of making misogynist statements and threats. He also reportedly brought a “rape list” of women into school.

Zuleikha Hassan had to bring her five-month-old to parliament because she couldn’t find a babysitter. “Now as we ask for more women to come into parliament, you need to provide a family-friendly atmosphere,” Hassan told reporters after being ejected from the chamber. The incident happened to coincide with World Breastfeeding Week.

France could expand IVF to single women and lesbians

Under current French law assisted reproduction is only available to infertile heterosexual couples. A new bioethics bill calls for France’s healthcare system to cover four rounds of fertility treatment per pregnancy for all women, AP reports.

The woman in question is Fiona Kolbinger, a 24-year-old German cancer researcher. The Transcontinental race is an incredibly hardcore 2,485-mile slog from Bulgaria to France. (Thanks to Alessandra, a reader who suggested I include this in the newsletter. If you have any suggestions please do send them to arwa.mahdawi@theguardian.com)

‘Spend more time on your knees than on the internet’

Strange how some anti-abortion activists are happy to separate kids from parents | Arwa Mahdawi | World news | The Guardian
Posted by John H Armwood II at 12:30 PM