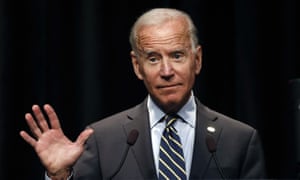 "Much like Hillary Clinton in 2016, Joe Biden’s Democratic primary campaign has thus far cloaked itself in an aura of inevitability. You might not like Joe Biden. He might say racist or sexist stuff from time to time. His gaffes might be occurring at an alarming rate. He might have uninspiring policy ideas. But he’s going to win the primary anyway, so you better get used to him.
That was the subtext, at least, and an explanation for how banal Biden’s campaign has been so far. If victory is certain, why not hold the ball and milk the clock? Jill Biden, the former vice-president’s wife, made the case bizarrely explicit on MSNBC earlier this week. “Your candidate might be better on, I don’t know, health care, than Joe is,” Biden said, “but you’ve got to look at who’s going to win this election, and maybe you have to swallow a little bit and say, ‘Okay, I personally like so-and-so better,’ but your bottom line has to be that we have to beat Trump.”
To be sure, Joe Biden is leading among Democrats thus far. The RealClearPolitics average has him ahead of Bernie Sanders by around 12 points, and he has the support of major party funders. But less than a third of Democratic voters are planning to vote for Biden, down from more than 40% the week after his 25 April announcement. An Economist/YouGov poll from this week shows the race narrowing to within the margin of error – Biden at 22%, Sanders at 19%, and Elizabeth Warren at 18%.
Biden’s fundraising picture also looks less rosy than it did back in May. He’s still the preferred choice of big party donors, but grassroots enthusiasm is receding. After raising an impressive $4.6m online on this first day of his campaign in April, things have slowed to a trickle. As Politico reports, Biden’s median online daily fundraising by the end of June was just $67,000 a day, considerably below Pete Buttigieg and Bernie Sanders.
Sanders is an especially important benchmark for Biden. They seem to be competing over much the same base – working class, diverse, not college educated – and either would benefit from the other’s downfall. Despite a narrative earlier this summer of campaign dysfunction and imminent collapse, recent polls have showed that the Vermont senator in a steady position within striking distance of Biden. Sanders has a rabid base of volunteers, superior online fundraising infrastructure, and his existing support may even be undercounted by most polls.
Yet the media narrative continues to paint Sanders as a fringe pariah and Biden as the inevitable 2020 candidate. It’s reminiscent of the 2016 Republican primaries, in which Donald Trump was considered an unserious candidate whose support was continually underestimated. The serious commentators kept waiting for an establishment wave of moderate Republicans to make first Jed Bush, then Marco Rubio, and then even Ted Cruz happen.
The case for Biden’s invincibility is especially baffling – he’s been running for the Democratic nomination (and losing) since the 1980s. It simply boils down to Obama coalition supporters (particularly black and brown voters) going with the most familiar face to rid of Trump era upheavals.
But electability is just one element of what voters are looking for, and Biden is running on nothing else. He has failed to adequate address his past positions in favor of Medicare and Social Security cuts, his engineering of loathed free trade deals, or his opposition to important desegregation measures.
While other candidates are galvanizing people around Medicare for All, the Green New Deal, and calls to redistribute wealth and power from the 1% to working Americans, Biden is offering nothing. Poke one hole in his electability bubble and his campaign looks ready to implode.
This early in the race things are constantly changing – many people are still undecided and won’t start paying attention until much later on – so we would do ourselves a lot of good not to live and die with every poll. However, if there is one lesson from the 2016 general election worth remembering it’s this: most people might have not liked Donald Trump, but he gave those who did a real reason to turn out on Election Day. He was a candidate with very obvious convictions running against someone who seemed to focus group and triangulate her every position.
Joe Biden is Hillary Clinton 2.0. Perhaps Trump’s time in office has been enough of a disaster that idea-avoidance will work this time. But if voters want to be inspired, they’ll turn elsewhere or just stay at home again. Who knows, Jill Biden might even join them.
Bhaskar Sunkara is the founding editor of Jacobin magazine and a Guardian US columnist. He is the author of The Socialist Manifesto: The Case for Radical Politics in an Era of Extreme Inequality"
Joe Biden inspires no one — not even his own wife | Bhaskar Sunkara | Opinion | The Guardian
Posted by John H Armwood II at 12:32 PM