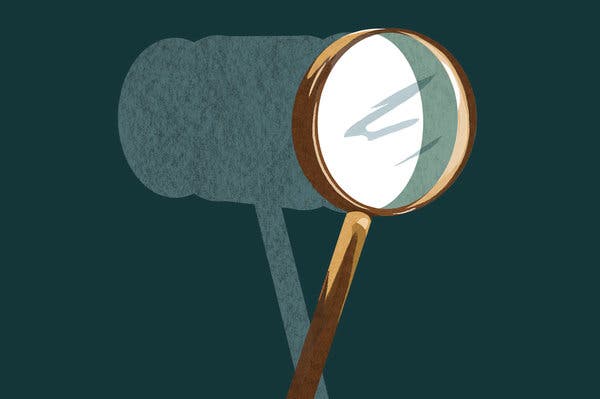 "In 1991, at the direction of President George H.W. Bush, the F.B.I. looked into Anita Hill’s allegations of sexual harassment against Clarence Thomas, who had gone through his confirmation hearings weeks earlier. The investigation took three days. The resulting report was provided to the White House, which said it showed that Ms. Hill’s allegations were “unfounded.” The Judiciary Committee reconvened a few weeks later, and heard from nearly two dozen witnesses, including Ms. Hill and Justice Thomas. Does Mr. Grassley now want to set an even lower standard for taking a woman’s claims seriously than the committee did when Ms. Hill appeared before it?

In an Op-Ed published by The Times on Tuesday, Ms. Hill called for a thorough investigation by a neutral body with experience in sexual-violence cases, and said it should not be rushed. “A week’s preparation is not enough time for meaningful inquiry into very serious charges,” she wrote.

Yet Mr. Grassley has rejected calls to involve the F.B.I. and offered to hear only from Dr. Blasey and Judge Kavanaugh themselves, even though there are numerous people who might be able to shed light on what may have happened on the night in question. First among these is Judge Kavanaugh’s high school friend Mark Judge, who Dr. Blasey said was in the room where she said the assault occurred, and who has given shifting answers about his recollections.

Speaking of unreliable memories, it’s laughable for Republicans to complain, as some do, that Dr. Blasey’s claim is too old to be considered. The Senate Judiciary Committee is not a court of law; it’s an arena of politics. Remember that less than a decade ago, Republican senators were happy to grill Sonia Sotomayor, President Barack Obama’s first pick for the court, about positions taken 30 years earlier by a legal-defense fund whose board she had once sat on.

Certainly there’s no statute of limitations preventing the committee from weighing allegations of attempted rape against a nominee to a lifetime seat on the highest court in the land. Besides, since Judge Kavanaugh has flatly denied the accusation, his honesty now — not as a teenager — is at issue.

The committee should ask probing questions of all parties. Just as Mr. Judge has given inconsistent statements to the press, there are discrepancies in the accounts of how Dr. Blasey has described the alleged events. It’s possible that she is misremembering events or even making them up, although it’s hard to see how people could imagine themselves benefiting from doing that. In the few days since Dr. Blasey’s name became public, she has already suffered, as she knew she would. She’s been forced into hiding with her family after receiving death threats.

But so far, Senate Republicans seem more concerned with getting Judge Kavanaugh confirmed than in getting to the truth of the accusation against him. Republicans know that their Senate majority is at risk on Nov. 6, and they want to seize their chance to give the court a solid right-wing majority for years to come.

“This has been a drive-by shooting when it comes to Kavanaugh,” Senator Lindsey Graham told reporters on Tuesday, giving the cynical game away in one compact statement. “I’ll listen to the lady, but we’re going to bring this to a close.”

Opinion | Everyone Deserves Better Than This Senate Spectacle - The New York Times
Posted by John H Armwood II at 8:46 AM