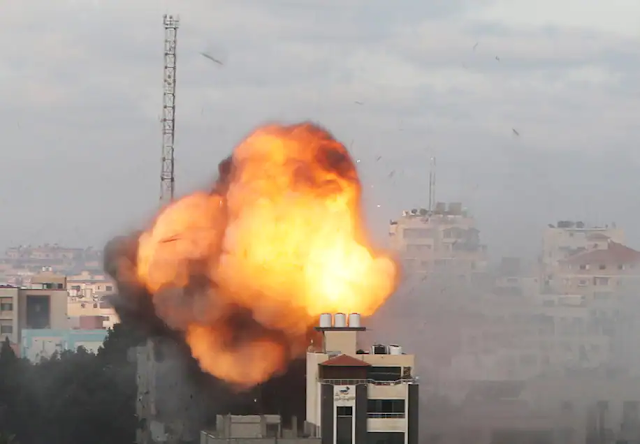 The Israeli military said 62 fighter jets had dropped 110 “guided armaments” on 65 targets, including Hamas commanders, rocket launchpads and the militant group’s tunnel network. Neither side reported casualties.
Israeli Prime Minister Benjamin Netanyahu on Monday night said that he would “continue to take whatever action necessary to restore quiet” even as President Biden expressed support for a cease-fire during a phone call.
In a reminder of the potential for the nine day conflict to inflame the region, half a dozen rockets were also fired at Israel from Lebanon, though they failed to enter Israeli territory. Israeli artillery immediately responded.
It was not immediately clear who was behind the attack, which followed a similarly ineffective barrage last week. The regional power, the Lebanese Shiite group Hezbollah, owner of a substantial arsenal of sophisticated rockets, denied involvement in that incident.
Here’s what to know:
Photos and videos taken by journalists in Gaza showed large explosions rocking the Palestinian enclave before dawn.
Hamas fired 90 rockets overnight, according to the Israeli military, bringing the total it has shot toward Israel to 3,440. On Monday evening, sirens sounded in the southern Israeli cities of Sderot, Ashkelon and Netivot. Two rockets fired from Gaza had hit a playground and a factory in the nearby city of Sderot, Haaretz reported. But there was no rocket fire from the enclave in response to Israel’s Tuesday morning raids, with the group reported to be in search of a truce.
Israel has so far declined entreaties from outside mediators, including Egyptians, that it agree to a halt, two officials familiar with the cease-fire talks told The Washington Post. The officials spoke on the condition of anonymity to discuss negotiations. Israeli military and political leaders have said they intend to do as much damage as possible to Hamas’s military infrastructure before taking a pause.
United Nations peacekeepers in Lebanon said they had detected the rockets launched toward Israel from southern Lebanon.
“On Monday 17 May at around 1130pm, UNIFIL detected firing of rockets from general area of Rashaya Al Foukhar north of Kfar Chouba in s. Lebanon,” the United Nations Interim Force in Lebanon said in a tweet. “IDF returned artillery fire directed at location from where rockets originated.”
“The IDF has now stopped the fire,” the mission continued, later adding: “The situation in the area is now calm.”
The incident came one night after the Israeli military said its soldiers prevented suspects from crossing the border from Lebanon.
On Monday, a Hamas military spokesman countered that if Israel didn’t stop its airstrikes on “homes and residential buildings” in Gaza, the militant group would “go back to attacking Tel Aviv.” So far, sirens in Tel Aviv have been silent since Saturday night.
Palestinians in the occupied West Bank, Jerusalem, and Israel planned to stay home from work on Tuesday and participate in protests planned across the territory.
“The strike is in solidarity with Palestinians in Gaza and the ongoing protests of Arab citizens inside Israel, as well as against the Israeli occupation and apartheid and colonialism,” said Ines Abdel Razak, a Palestinian activist in Jerusalem.
This is a “moment of mobilization and rising and I think we’re all trying to follow and build this momentum,” she said. Demonstrations were planned in cities in the West Bank and Israel.
As the conflict continues, the United Nations Relief and Works Agency said it was sheltering 42,000 Palestinians in 50 of its schools in Gaza.
UNRWA said the fourth major outbreak of violence in Gaza since 2008 was also forcing Palestinians to seek shelter “mosques and other places during a global COVID-19 pandemic with limited access to water, food, hygiene, and health services.”
An Israeli airstrike partially destroyed Gaza’s only covid-19 laboratory on Monday, according to local health authorities.
Biden added his voice to those calling for a cease-fire on Monday, urging both Israel and Hamas to “protect innocent civilians.” This subtle rebuke of Israel, a close U.S. ally, came during a call with Netanyahu. The White House said Biden also “reiterated his firm support for Israel’s right to defend itself against indiscriminate rocket attacks.”
In a nationally televised speech the same day, however, Netanyahu vowed that military operations would continue.
“The directive is to continue striking at the terrorist targets,” the prime minister said, citing strikes on Hamas’s tunnel network and the assassination of an Islamic Jihad commander. “The IDF is doing this very well.”
His comments were echoed by IDF Chief of Staff Aviv Kochavi, who told the heads of local governments in the area that airstrikes on Gaza would continue for at least the next two days.
A diplomatic source familiar with Egypt’s negotiations to broker a cease-fire told the Times of Israel that “we’re close” and that it should be reached in “two days maximum.”
Berger reported from Jerusalem, Balousha from Gaza City."
Israeli-Palestinian conflict: Latest updates on Israel-Hamas battles over Gaza - The Washington Post
Posted by John H Armwood II at 5:52 AM