Pence Links Suleimani to 9/11. The Public Record Doesn’t Back Him. - The New York Times 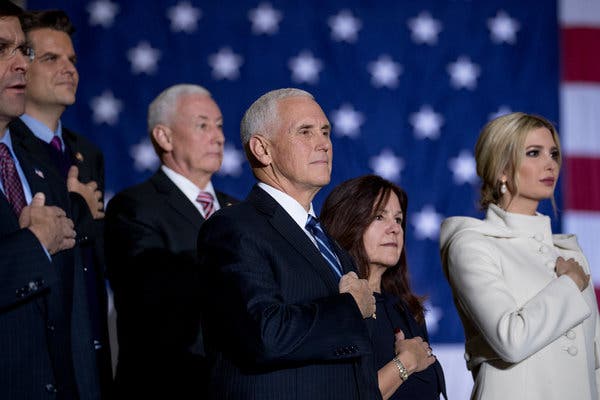 "In a series of tweets on Friday, Vice President Mike Pence said that Maj. Gen. Qassim Suleimani “assisted in the clandestine travel to Afghanistan of 10 of the 12 terrorists who carried out the September 11 terrorist attacks in the United States.”

In a series of tweets on Friday, Vice President Mike Pence said that Maj. Gen. Qassim Suleimani “assisted in the clandestine travel to Afghanistan of 10 of the 12 terrorists who carried out the September 11 terrorist attacks in the United States.” Andrew Harnik/Associated Press

In a series of tweets on Friday defending President Trump’s decision to authorize the drone strike that killed Iran’s top intelligence commander, Maj. Gen. Qassim Suleimani, Vice President Mike Pence reeled off a list of some of General Suleimani’s most notorious attacks and machinations. Mr. Pence described “an evil man” who had threatened American national security interests for decades.

In one of his tweets, Mr. Pence claimed that General Suleimani helped 10 of the men who would go on to carry out the Sept. 11, 2001, attacks cross through Iran and enter Afghanistan. That does not match established historical accounts of General Suleimani or public United States intelligence about the hijackers.

Mr. Pence said on Twitter that General Soleimani “assisted in the clandestine travel to Afghanistan of 10 of the 12 terrorists who carried out the September 11 terrorist attacks in the United States.”

This lacks evidence. How Mr. Pence arrived at this number and this account is unclear. From what is commonly known about General Suleimani and the group of men who carried out the Sept. 11 attacks, their paths did not cross.

To start, many observers were quick to point out that 19 terrorists, not 12, were involved in the attacks. Katie Waldman, a spokeswoman for Mr. Pence, clarified that he was referring to a subset of 12 of the attackers who are known to have traveled through Iran to Afghanistan.

Ms. Waldman said that Mr. Pence’s statement was based on a finding by the U.S. Treasury Department in 2016 that Iran permitted “several of the 9/11 hijackers” to transit through the country. The finding did not directly link the hijackers to any forces overseen by General Suleimani, or specify how many may have been granted passage.

The notion that General Suleimani abetted the attackers at all also appears dubious.

By 2001, General Suleimani had already been named the head of the Quds Force, the powerful security branch that often coordinates with other terrorist groups worldwide. Yet General Suleimani was not named at any point in the “9/11 Commission Report.”

In fact, the report states in no uncertain terms that neither the Iranian government nor Hezbollah, a group that General Suleimani worked closely with, ever knew anything about the attacks or helped facilitate them:

We have found no evidence that Iran or Hezbollah was aware of the planning for what later became the 9/11 attack. At the time of their travel through Iran, the Al Qaeda operatives themselves were probably not aware of the specific details of their future operation.

Why General Suleimani, the leader of a hard-line Shiite Muslim military apparatus, would have come to the aid of members of Al Qaeda, a Sunni extremist group with strong ties to Saudi Arabia, is also unclear.

General Suleimani spent much of his career undermining Saudi Arabia, and once even plotted to have the Saudi ambassador to the United States assassinated. At various points, he was also said to have helped facilitate the capture of Qaeda militants on behalf of the United States.

Zach Montague is based in Washington, D.C. He covers breaking news and developments around the district. @zjmontague"

Pence Links Suleimani to 9/11. The Public Record Doesn’t Back Him. - The New York Times
Posted by John H Armwood II at 12:48 PM