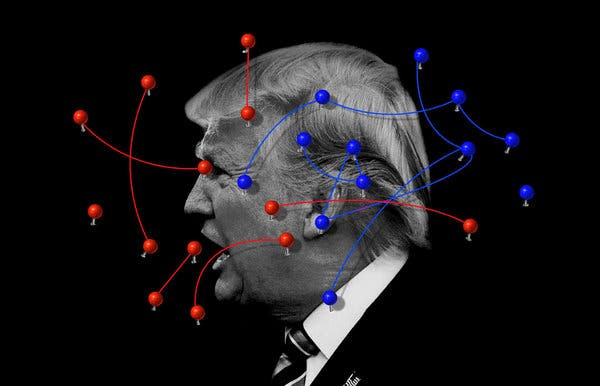 "As outlandish and extreme as it is, warning of a looming civil war is a familiar talking point across the pro-Trump media. It’s part of a growing tradition of right-wing fearmongering — what Vox’s Dylan Matthews referred to last year as “apocalypse punditry” — that moves easily from the online fever swamps to the Oval Office and back again.

So it wasn’t surprising — though it was deeply troubling — to see President Trump tweet a warning from a pastor on Sunday night of “a Civil War like fracture in this Nation” should he be removed from office.

Invoking civil war — even indirectly — was once a third rail of modern American presidential rhetoric. Though Mr. Trump in the past has openly toyed with illiberal notions (ignoring term limits, not accepting election results should he lose), his casual suggestion that his ouster might lead to bloodshed felt like uncharted territory.

It doesn’t matter that we’re not on the brink of a civil war; the threat as outlined by right-wing media is intended to inspire fear in liberals and conservatives alike. For conservatives, it’s the notion that Democrats will stop at nothing to get rid of Mr. Trump and will marshal the forces of the “deep state” to right the wrongs of the 2016 election. For liberals, it is a warning: Don’t push churchgoing, gun-loving conservatives too far, or there’ll be dangerous consequences.

The right’s civil war fantasy has roots in a long-held fear that liberal policies will lead to tyranny. It’s the logic behind AM radio rants about gun grabs, black helicopters and F.E.M.A. death camps.

Civil war rhetoric increased sharply during the Obama administration, led, in part, by anti-government radicals like Cliven Bundy. In 2014, the conservative radio host Michael Savage released a book, “How to Stop the Coming Civil War,” which argued that “Obama’s election to the presidency in 2008 might represent the final nail in the coffin of freedom.”

But what began as trollish shorthand for increasing political polarization has gone mainstream, thanks to a cottage industry that makes money by deepening partisan divisions.

In the fall of 2017, alt-right YouTubers and websites began circulating a conspiracy theory that anti-fascist protesters were, as one site phrased it, “planning to kill every single Trump voter, conservative and gun owner” at various protests across the country. The baseless rumor was first promoted by obscure YouTube accounts that summer and then spread across Facebook groups with breathless posts and memes. It was amplified by conspiracy sites like Alex Jones’s Infowars that September (Infowars has a rich history of predicting imminent civil wars).

By late October 2017, pro-Trump blogs joined in. The Gateway Pundit (a blog frequently linked to by the Drudge Report) posted a story with a headline suggesting “Millions of Antifa Supersoldiers Will Behead All White Parents.” The piece was based on a satirical tweet from an account unaffiliated with the anti-fascist movement.

No war broke out. But the pro-Trump media continued to warn that it was around the corner. For the last two years, the right-wing pundit John Cardillo has fired off tweets referencing an impending “Civil War 2.0” supposedly declared by the left.

Rarely is the order of battle for a civil war actually spelled out. Where will the opposing armies gather to train — Twitter? How will they pick opposing uniform colors (MAGA and knit pussyhats are terrible camouflage)? Which side gets the nuclear arsenal (I assume we will draw biodegradable paper straws)? Kurt Schlichter, a Town Hall writer and occasional Fox News guest, tackled the topic in a column titled, “Why Democrats Would Lose the Second Civil War, Too.” The article reads like fan fiction, including instructions for how “hunters in Wisconsin” might take down military tanks: “They ambush the fuel and ammo trucks. Oh, and they wait until the gunner pops the hatch to take a leak and put a .30-06 round in his back from 300 meters. Then they disappear.”

Mr. Schlichter has also argued we’re already in a “cold civil war with America’s alleged elite,” but he is one of many on the right pushing the fantasy. The Gateway Pundit publishes articles with headlines like ““GET READY AND PRAY TO GOD — The Time Is Now — The Impostors Are Preparing the Final Act in Their Coup D’état.” A Breitbart contributor argued in 2018 that “the ‘Coming Civil War’” is “already here.” That summer, Mr. Jones declared that Democrats planned to “launch civil war on July 4th.” Days earlier, in a tweet, Representative Steve King of Iowa argued that the country was on the brink: “America is heading in the direction of another Harpers Ferry. After that comes Ft. Sumter.”

While Mr. King’s tweet was roundly condemned and Mr. Jones’s warning was mocked with the viral hashtag #secondcivilwarletters, apocalypse punditry has crept into mainstream news with increasing frequency in 2019. Joseph diGenova, a frequent commentator on Fox News, argued in favor of buying guns in February, noting, “It’s going to be total war.” A day later, an MSNBC host expressed her fears of looming civil unrest.

Less than a month later, Mr. King again posted about civil war — this time it was a Facebook meme warning that red states have “8 trillion bullets.” By March, The Washington Post had enough fodder for a trend piece with the headline, “In America, Talk Turns to Something Not Spoken of for 150 Years: Civil War.”

The threat of a civil war often comes up in discussions of an assault weapons ban. A proposed gun buyback program? “What you are calling for is civil war,” Tucker Carlson said on Fox News. The conservative writer Erick Erickson tweeted, “It is not a stretch to say there’d be violence if the gov’t tried to confiscate” AR-15s. Meghan McCain warned on ABC’s “The View,” “If you’re talking about taking people’s guns from them, there’s going to be a lot of violence.”

The threat of civil war is so divisive that it was also used by Russian trolls during 2016, according to a federal criminal complaint against a Kremlin operative made public during the Mueller investigation.

Given the long history of the civil war-mongering, it’s unsurprising that the rhetoric made its way to the president’s Twitter account.

That’s because the Trump-media conspiracy flow chart is circular. Outlandish theories burble up from the depths and are laundered up through increasingly mainstream channels until they reach the president. Once amplified by Mr. Trump, the idea is lent more credence and is cited more frequently in right-wing media, which ultimately leads Mr. Trump to amplify it more aggressively.

We’re no closer to a (frankly ridiculous) civil war than we were two days or two weeks or two years ago. But it feels to some like we could be, and that matters. The cycle feeds itself. Fear wins. We all lose."

Opinion | Why Trump Tweeted About Civil War - The New York Times
Posted by John H Armwood II at 5:46 AM