Revealed: long-troubled US oil firms are capitalizing on coronavirus assistance | Oil and gas companies | The Guardian

Revealed: long-troubled US oil firms are capitalizing on coronavirus assistance

Recent review finds at least $50m in taxpayer-backed loans meant for small businesses have gone to fossil fuel industry
‘The outlook for US shale companies bad before before the pandemic and the recent steep decline in oil demand that forced oil prices negative.’ Photograph: Paul Ratje/AFP via Getty Images
Emily Holden in Washington
Published onThu 14 May 2020 06.00 EDT
72
American oil and gas companies were often in financial trouble well before the coronavirus economic crisis, and now many are asking for taxpayer assistance to cushion their fall.
Texas-based Battalion Oil, which recently changed its name from Halcón, has taken a $2.2m coronavirus relief loan, after going bankrupt twice within the last four years and facing accusations of excessive spending on an executive pay, private planes and luxury vehicles.
Despite a history of financial woes, Battalion is receiving assistance under the paycheck protection program (PPP), the US government’s strategy for getting cash to small businesses so they can continue to pay workers during the coronavirus shutdown as part of a more than $2tn aid package. The company will not have to return the money if it spends it on approvable expenses, including payroll, rent and utilities. 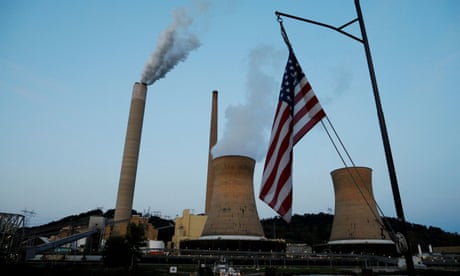 US fossil fuel giants set for a coronavirus bailout bonanza
Read more
Many independent drillers were already mired in debt from chasing the fracking boom, according to analysts. They were finding it harder to secure investment and even facing bankruptcy.
Other companies that analysts have flagged as having risky levels of debt have received loans too, including the Oklahoma-based Laredo Petroleum, which took a $1.2m payment. Laredo’s former CEO also lobbied the Trump administration to scrutinize what he saw as uncertainty in climate science. PDC Energy took a $10m payment but repaid it, citing new guidelines from the government."
Revealed: long-troubled US oil firms are capitalizing on coronavirus assistance | Oil and gas companies | The Guardian
Posted by John H Armwood II at 9:01 AM