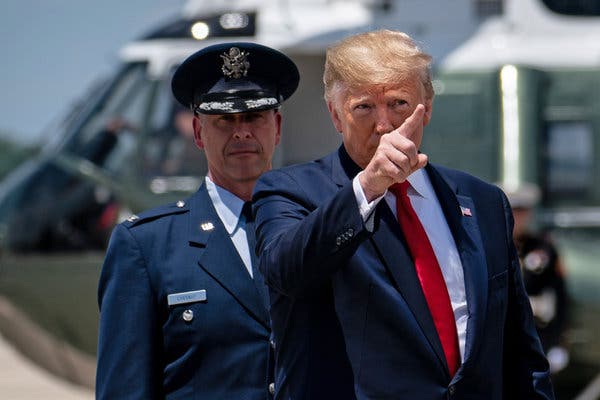 "President Trump reserves some of his worst behavior for foreign trips, such as abasing himself before President Vladimir V. Putin of Russia in Helsinki a year ago, skipping a ceremony in France last fall to honor American soldiers killed in World War I (too rainy, the White House said) and insulting the mayor of London earlier this month. Yet even by Mr. Trump’s dismal standards, his performance this week before the G-20 summit in Osaka, Japan, should take everyone’s breath away. More than yet another demonstration of his erratic behavior, this was also an object lesson in the dangers of his context-free hostility to the world beyond the United States.

Before arriving in Japan, Mr. Trump had reportedly been musing about withdrawing the United States from the security treaty with Japan signed in 1951 and revised in 1960 — the cornerstone of the alliance between the United States and Japan and a pillar of American foreign policy. On Wednesday, asked about the treaty on Fox News, Mr. Trump sneered, “If Japan is attacked, we will fight World War III.” Then he added: “But if we’re attacked, Japan doesn’t have to help us at all. They can watch it on a Sony television.”

Mr. Trump’s comment demonstrates a strategic cluelessness and historical ignorance that would disqualify a person from even a modest desk job at the State Department.

Though Mr. Trump implied that the security treaty favors Japan, it was largely dictated by the United States. After Imperial Japan surrendered to the Allies in August 1945, ending World War II, the country was placed under an American-led occupation overseen by the domineering Gen. Douglas MacArthur. When that occupation ended in April 1952, Japan had turned away from militarism to embrace ideals of pacifism and democracy. Under Article 9 of a new Constitution that was originally drafted in English at MacArthur’s headquarters, Japan renounced war and pledged never to maintain land, sea or air forces.

In the 1951 security treaty that Mr. Trump apparently disparages, the United States, from a position of extraordinary dominance over Japan, got pretty much what it wanted. Japan granted the United States the exclusive right to post land, air and sea forces in and around Japan, which the United States could use to defend Japan against armed attack or against Soviet-instigated riots. In a revised 1960 treaty, it was made clear that if Japan was attacked, the United States would defend it. For much of the Cold War, a democratic Japan became the core of American alliances in Asia, a bulwark against Communism in the Soviet Union and China.

Furthermore, Mr. Trump insults his Japanese hosts by overlooking how Japan actually responded when the United States was attacked on Sept. 11, 2001. The Japanese public grieved for their American allies after the terrorist attacks, which also killed some Japanese citizens. Japan’s conservative and pro-American prime minister, Junichiro Koizumi, took the massacre as an opportunity to reconsider Article 9 and urge his country to shoulder more international responsibilities. His government rammed through an antiterrorism law which enabled Japan’s Self-Defense Force to provide support for the American campaign in Afghanistan, although — because of the country’s official pacifism — without fighting or directly supporting combat operations.

When President George W. Bush invaded Iraq in 2003, Mr. Koizumi was one of his staunchest foreign supporters. Although Japan remained constitutionally forbidden from joining in the invasion or taking a direct military role, Mr. Koizumi’s government passed a special law allowing the Self-Defense Force to help in humanitarian support missions in postwar Iraq. Hundreds of Japanese ground troops in Iraq provided water and medical help, and fixed roads and buildings. One might reasonably fault Mr. Koizumi, as plenty of Japanese do, for going along with Mr. Bush’s disastrous invasion — but it is far harder to blame Japan, as Mr. Trump does, for not standing alongside the United States.

Mr. Trump’s words are also a pointless slap to Japan’s right-wing prime minister, Shinzo Abe, who has ardently sought to cultivate a relationship with Mr. Trump and is trying to mediate a way out of the crisis between the United States and Iran. The 1960 treaty was signed by Mr. Abe’s grandfather, Nobusuke Kishi, another prime minister. During a four-day state visit to Japan in May, Mr. Abe flattered Mr. Trump with an extraordinary meeting with Japan’s new emperor, a sumo wrestling match and a lavish state banquet at the Imperial Palace. Yet standing next to Mr. Abe at a news conference in Tokyo, Mr. Trump shrugged off Japanese fears about North Korea’s recent tests of short-range ballistic missiles that could kill thousands of Japanese civilians.

What could Mr. Trump possibly hope to gain from his ignorant, ungrateful and antagonistic behavior? He is unlikely to withdraw from the security treaty. Yet by questioning the alliance with Japan, Mr. Trump encourages North Korea and a rising China to test that bond. His words undercut an essential alliance for no evident reason and erode the stability of a strategic region torn by rivalry.

And we are all so used to it by now that it barely registers.

Gary J. Bass is a professor of politics and international affairs at Princeton and the author, most recently, of “The Blood Telegram: Nixon, Kissinger and a Forgotten Genocide.”

Opinion | Trump’s Ignorant Comments About Japan Were Bad Even for Him
Posted by John H Armwood II at 6:06 AM