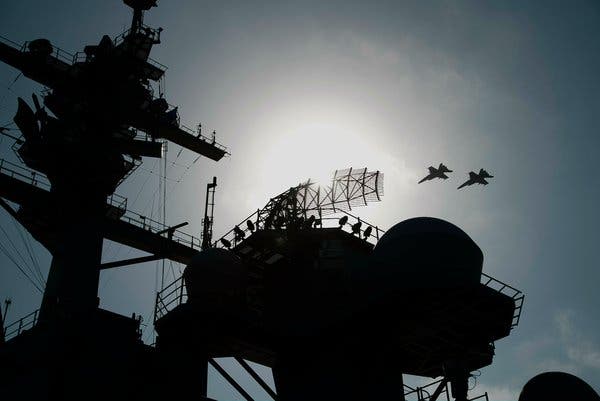 "The Trump administration’s campaign of maximum pressure and minimal diplomacy is bringing the two countries ever closer to blows. Lawmakers must weigh in.

ImageThe aircraft carrier Abraham Lincoln was sent to the Middle East as tensions with Iran grew.

The aircraft carrier Abraham Lincoln was sent to the Middle East as tensions with Iran grew.CreditCreditJon Gambrell/Associated Press

From the U.S.S. Maine in Havana Harbor in 1898 to the U.S.S. Maddox in the Gulf of Tonkin in 1964, maritime incidents, shrouded in the fog of uncertainty, have lured the United States into wars on foreign shoals. Which is why cooler heads must prevail — and Congress must be consulted — as American and Iranian forces inch closer to open conflict in and around the Strait of Hormuz.

The downing of an unmanned American surveillance aircraft on Thursday by an Iranian surface-to-air missile is another worrying click of the ratchet between the Trump administration, which unilaterally abandoned the 2015 nuclear accord for a campaign of “maximum pressure,” and an Iranian government suffering from tighter economic sanctions. Thursday night brought news that President Trump was considering a retaliatory strike.

Iran claimed responsibility on Thursday for the downing of what the Pentagon said was a RQ-4 Global Hawk drone. Iran said the drone had violated its airspace. The United States Central Command said the spy craft was operating in international airspace.

“I find it hard to believe it was intentional,” President Trump said about the shoot-down on Thursday afternoon, adding that “this country will not stand for it, that I can tell you.”

The inconsistent messages from the White House underscore the fact that both the United States and Iran are capable of making grave strategic miscalculations.

On Monday, Iran announced that it would soon stop honoring a central component of a 2015 nuclear deal, the limit on how much low-enriched uranium the country is allowed to stockpile. The same day, the Pentagon announced the deployment of an additional 1,000 troops, Patriot missile batteries and pilotless aircraft to the region. That new deployment came in addition to the 1,500 troops, an aircraft carrier group and B-52 bombers sent to the region last month.

The most recent deployment was in response to attacks last week against two oil tankers in the Gulf of Oman, attacks the American military blamed on Iran’s Islamic Revolutionary Guards Corps. Iran denied involvement, while government officials in Europe expressed some skepticism at the evidence of Iranian culpability. The Pentagon also said that Iranian forces shot a missile at an American drone flying over the Gulf of Oman near the time of the ship attacks.

With opposing military forces in such proximity, with accusations and munitions flying and with the White House facing a trust deficit, the danger of open conflict increases by the day. Which is why, if Mr. Trump and the Warhawk Caucus — led by the national security adviser, John Bolton; the secretary of state, Mike Pompeo; and Senator Tom Cotton — want a wider military conflict with Iran, they first need to persuade Congress and receive its approval.

Mission creep has unfortunately become standard operating procedure for the Pentagon in the post-9/11 world, and it is long past time that the legislative branch reclaimed its central role in overseeing war waged in the name of the American people.

There are encouraging signs that Capitol Hill is reasserting its authority. Against the wishes of the president, the Senate voted Thursday to block arms sales to Saudi Arabia for its proxy war with Iran being waged in Yemen.

The House of Representatives also this week voted to repeal the 2001 Authorization for Use of Military Force as part of a $1 trillion spending bill. The 18-year-old authorization does not permit the opening of a new conflict with Iran in 2019, despite efforts by the administration to convince a skeptical Congress that Iran is somehow allied with Al Qaeda.

Linking Al Qaeda to a despotic Middle East regime was exactly the pretext that the George W. Bush administration used to invade Iraq, with catastrophic results. It would insult the intelligence of every American for the Trump administration to attempt the same gambit.

Mr. Trump drew his own line against acting without congressional approval in a tweet back in 2013, after regime forces in Syria launched a series of chemical weapons attacks: “The President must get Congressional approval before attacking Syria — big mistake if he does not!”

We supported President Barack Obama’s decision to seek congressional authorization in 2013 for any unilateral action against the Syrian government and criticized his earlier announcement of a red line that would trigger American intervention, because that statement boxed him in by putting American credibility at stake.

It’s now President Trump who faces a crisis in credibility — over the wisdom of abandoning nuclear diplomacy in favor of confrontation; over the legality of using the 2001 terrorist attacks as a legal justification for another conflict in the Middle East; over the morality of enabling a conflict in Yemen, which the United Nations calls the world’s worst man-made humanitarian disaster. Most concerning, despite his stated aversion to entering another war, he shows little sign of having learned a central lesson of the past two decades of American military action: that it is easy to start conflicts and impossible to predict how they might end."