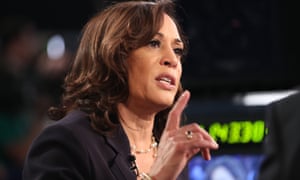 "In several commanding moments, she distinguished herself from her rivals and positioned herself to lead the fight against Trump

‘Kamala Harris turned out to be the breakout performance of the evening.’

‘Kamala Harris gave what turned out to be the breakout performance of the evening.’ Photograph: Joe Raedle/Getty Images

As the second round of Democratic presidential debates approached, one of the major questions on the minds of voters and political commentators was whether the candidates would focus on trying to differentiate themselves from each other, as was done the previous night, or whether they would focus on critiquing Donald Trump.

Senator Kamala Harris chose to do both, and she did so effectively, in what turned out to be the breakout performance of the evening.

Very early in the debate, when asked how the candidates planned to pay for their various proposals, Harris put the question back on the moderators. “Where was that question when the Republicans and Donald Trump passed a tax bill that benefits the top 1% and the biggest corporations in this country?”

At another point, as the candidates seemed to be squabbling and talking over one another, Harris brought it to an end by stating: “America does not want to witness a food fight – they want to know how we’re going to put food on the table.”

But without a doubt, the debate’s most memorable moment was an exchange between Harris and the former vice-president Joe Biden on race. First, Harris shared how “hurtful” she found Biden’s warm remarks last week about working with the segregationist senator James Eastland. Then she proceeded to challenge Biden’s well-documented opposition to bussing – a policy of the 1960s and 70s designed to integrate schools still segregated more than 20 years after the historic Brown v Board of Education decision.

“There was a little girl in California who was part of the second class to integrate her public schools, and she was bussed to school every day, and that little girl was me,” Harris said.

The moment was powerful not only because of the imagery of the seasoned politician coming face-to-face with the adult version of a little girl directly affected by his policy positions. It was also powerful because of the brief debate which followed over the role of the federal government in intervening when states fail to protect civil rights. In that exchange, Biden demonstrated not only his age but his political inclinations by defending local authority over federal remedies such as bussing.

In doing so, Biden was essentially echoing the “states’ rights” arguments of the avowed segregationists whom he was accused of praising just one week earlier.

Harris was not the only one to challenge Biden, which was to be expected given Biden’s status as the clear frontrunner at this stage of the campaign. Representative Eric Swalwell reminded Biden of his own words from 32 years earlier as he challenged the former vice-president to “pass the torch” to younger generations. Senator Bernie Sanders criticized Biden for his 2002 vote in favor of the Iraq war, and Senator Michael Bennet undermined Biden’s 2012 example of his negotiation skills by raising the point that Biden helped Republicans to extend the controversial Bush tax cuts.

Biden had some self-inflicted wounds as well. On two occasions as the moderators asked direct yes or no questions to the candidates, Biden’s responses were confusing. One such question was on whether the candidates would decriminalize immigrants who crossed the US border, and the moderator José Díaz-Balart was forced to ask the question not once, not twice, but three times before getting an answer from Biden.

Which Democrats are running for 2020?

Sanders, who among those on the stage Thursday night was trailing only Biden in most polling data, was well situated to take advantage of Biden’s missteps. However, Sanders often seemed to give the same answer regardless of the question. From healthcare to climate change, Sanders provided his trademark responses about the need to take on Wall Street, the insurance companies and billionaires. In fact, in his closing remarks he reminded the audience that “nothing will ever change” unless we have the guts to take on big business.

It is not likely that Sanders lost ground during the debate, but neither did he do much to strengthen his case. Given the recent surge of Senator Elizabeth Warren, who is largely assumed to be picking off some of Sanders’ support, this means that his performance was unsuccessful.

Meanwhile, South Bend’s mayor, Pete Buttigieg, had a steady night as he gave clear and thoughtful answers to most questions. When asked a tough question regarding the recent shooting of a black man by a member of Buttigieg’s police force, Buttigieg admitted that he had failed to get the job done in his response. It could have been one of the more memorable moments from the debate, but the moment was lost when Swalwell asked the question that is on the mind of many black residents in the city of South Bend: “Why didn’t you fire the police chief?”

Buttigieg did not have a persuasive answer, and what had been a moment of sincerity became a painful reminder that too often those who have the power to address the ills of structural racism simply fail to use all of the tools at their disposal.

It was that question to Buttigieg which led to the exchange between Harris and Biden, as Harris reminded the moderators that as the only black person on the stage she certainly had something to say. And what she went on to say could very well change the direction of the campaign.

Cliff Albright is the cofounder of the Black Voters Matter Fund"

Kamala Harris just changed the direction of the presidential race | Cliff Albright
Posted by John H Armwood II at 6:16 AM