Opinion | The Commander of Fear - The New York Times 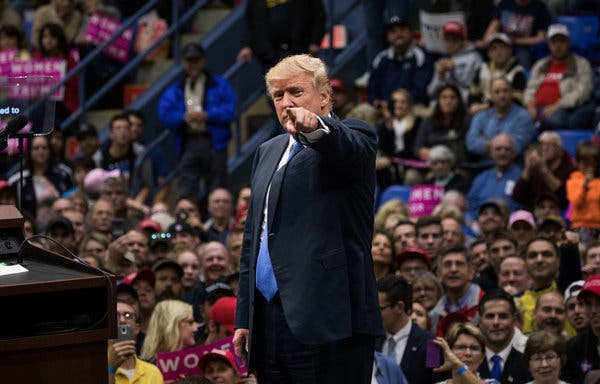 "During the presidential campaign, in the spring of 2016, the Republican front-runner Donald Trump sat down for an interview with Bob Woodward and Robert Costa of The Washington Post. They quoted President Barack Obama on global power and foreign affairs saying that “real power means you can get what you want without having to exert violence.” They then asked Trump if he agreed.

Woodward made “Fear” the title of his forthcoming book about Trump.

Trump has found — or has always had — a winning populism perfectly suited for this moment in our history, when the anxious, scared, hateful and callous desire an unapologetic voice that has the backing of actual power.

Trump’s magical mixture is to make being afraid feel like fun. His rallies are a hybrid of concert revelry and combat prep.

Trump tells his followers about all the things of which they should be afraid, or shouldn’t trust or should hate, and then positions himself as the greatest defense against those things. His supporters roar their approval at their white knight.

Fear is the poison-tipped arrow in Trump’s quiver. He launches it whenever he needs to change the subject, justify his callousness and racism, or defend himself from critique.

And he has been doing this since he got into the race for president.

He kicked off his campaign by saying of Mexican immigrants: “They’re bringing drugs. They’re bringing crime. They’re rapists. And some, I assume, are good people.” This fear would help form the justification for Trump’s wall of hate.

According to The New York Times, in June 2017 Trump read aloud from a document that detailed how many people from which countries had received visas to enter the United States in 2017.

“More than 2,500 were from Afghanistan, a terrorist haven, the president complained. Haiti had sent 15,000 people. They ‘all have AIDS,’ he grumbled, according to one person who attended the meeting and another person who was briefed about it by a different person who was there.”

The Age That Women Have Babies: How a Gap Divides America

He constantly whips up panic about the Salvadoran-American gang MS-13. In May, in a meeting at the White House, a California sheriff lamented that she couldn’t notify Immigration and Customs Enforcement if a known MS-13 member was jailed for a minor crime.

“We have people coming into the country, or trying to come in — and we’re stopping a lot of them — but we’re taking people out of the country. You wouldn’t believe how bad these people are. These aren’t people. These are animals. And we’re taking them out of the country at a level and at a rate that’s never happened before. And because of the weak laws, they come in fast, we get them, we release them, we get them again, we bring them out. It’s crazy.”

At the height of outrage over his family separation policy and the locking of children in cages, Trump offered a fear-mongering counterpoint by hosting at the White House the families of people killed by undocumented immigrants, and encouraged those relatives to share their painful tales of loss.

Last week Trump told Fox News, “If I ever got impeached, I think the market would crash, I think everybody would be very poor.”

On Monday, according to The Times, Trump warned evangelical leaders that if Democrats gain control of Congress in the midterm elections, they “will overturn everything that we’ve done and they’ll do it quickly and violently.”

Fear is an easily activated emotion. It’s cheap. It’s effective. Trump knows all of this, and he uses it.

It is easier to instill people with fear than to imbue them with hope.

Fear doesn’t have to be rational or reasonable to be real.

A lie is just as solid a foundation for fear as truth is. Indeed, the lie is probably an even better foundation.

Trump is playing the people who support him and they revel in the delight of being played. It’s all dramatic theater, a game in which the rule maker is armed with the power of the presidency.

He doesn’t so much expose them to new fears as he draws up within them their existing fears. Trump is the Commander of Fear and those who support him have found a perverse comfort in that fear."

Opinion | The Commander of Fear - The New York Times
Posted by John H Armwood II at 11:33 AM