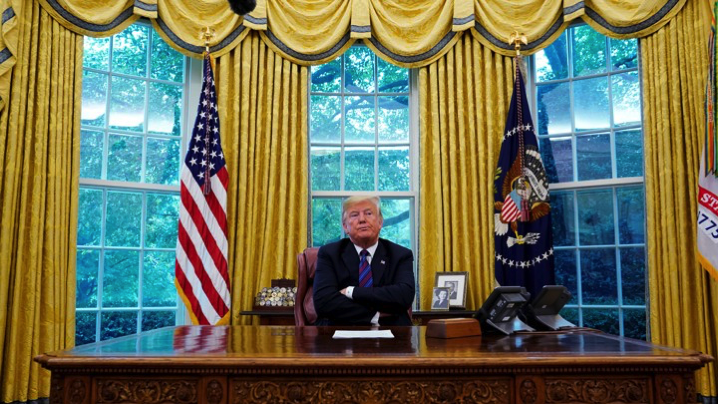 "President Trump said Monday he’s “terminating” NAFTA, the free trade deal with Canada and Mexico he’s called a “disaster” and blamed for job losses in the United States. It looked like a potentially massive development, as if Trump were signaling the end of a $1 trillion trade deal that’s defined trade in North America for more than two decades.
But what he went on to describe seemed like more of a rebrand than a revolution. He hailed new trade arrangements with Mexico, said he’d “see if Canada can be part of the deal,” and signaled that what he might really want to terminate was the name “NAFTA” itself.

“They used to call it NAFTA. We’re going to call it the United States-Mexico Trade Agreement, and we’ll get rid of the name NAFTA,” Trump said in the Oval Office, with Mexican President Enrique Peña Nieto on speaker phone. “It has a bad connotation because the United States was hurt very badly by NAFTA for many years.” (Peña Nieto, in his remarks, referred to the agreement as NAFTA.)

How easily could Trump withdraw the U.S. from NAFTA?

Trump also appeared to suggest that the agreement with Mexico was a bilateral one and that the U.S. would reach a separate bilateral agreement with Canada, the United States’s second-largest trading partner. “I think we’ll give them a chance to probably have a separate deal,” he said. “We can have a separate deal or we can put it into this deal.”
He added: “One way or another we’ll have a deal with Canada. It’ll either be a tariff on cars or it’ll be a negotiated deal. Frankly, a tariff on cars is a much easier way to go. Perhaps, the other would be much better for Canada.” A tariff on Canadian auto imports to the U.S. would make cars more expensive for American consumers.

Monday’s remarks fit the pattern of Trump’s international negotiations. They showed his preference for dealing with countries one-on-one rather than through multilateral institutions, a tendency he’s displayed in trade negotiations with Europe as well. And they also showcased a strategy where Trump bluffs, rebrands, and claims victory. It’s not clear Trump can actually terminate NAFTA without congressional approval; he signaled his dislike of the agreement’s “connotations;” and he declared his arrangement with Mexico “an incredible deal for both parties.”

But what it may amount to in the end is some tweaks to the existing agreement—albeit ones that concern some of the most significant issues in the U.S. trade relationship with Mexico. Among these is the auto industry. The two countries agreed on steps that would, in effect, stimulate American manufacturing. The auto negotiations, the Toronto Star reported, had become contentious, which is part of the reason they didn’t include Canada. Other details of the deal with Mexico, and any agreement with Canada, will likely emerge in the coming days and weeks.