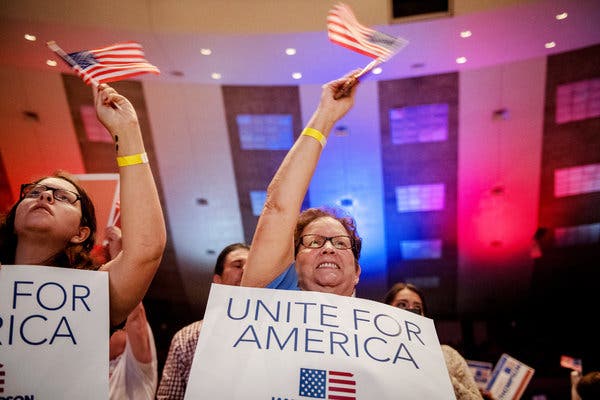 "Nor do Republicans appear ready to reverse course. President Trump recently proposed a $12 billion bailout for farmers hurt by the trade war he started, and senior White House advisers have called for a second round of tax cuts that would make permanent the individual rate cuts in the first tax law, at a cost of roughly $600 billion. Reports suggest the administration is mulling a unilateral change to the taxation of capital gains that would add another $100 billion to the deficit. Another giant spending bill is on the horizon.

Republican governance has shown how much the party actually cares about the deficit: not one bit.

The party’s hypocrisy on the budget is not new. After Bill Clinton dramatically shrank both deficits and government spending as a share of the economy, George W. Bush took office and proceeded to dramatically increase both.

Yet the thoroughness of the Republicans’ insincerity is still remarkable. Through their actions, they have proven that they cared about the deficit primarily for its usefulness as a political cudgel, an easy way to curtail Democratic policy goals.

So it is hardly surprising that Democrats, driven by young progressives, would respond by moving toward an agenda that no longer treats those concerns as genuine. True, even Ms. Ocasio-Cortez has not entirely given up the pretense of caring about deficits. In a recent “The Daily Show” appearance, she was asked how she would pay for her agenda, and she responded by proposing a series of tax increases and a significant reduction in military spending.

The core tax changes would raise about $2 trillion over 10 years, she said, while additional, unspecified revenue could be raised through defense cuts and a carbon tax. Think tanks from across the political spectrum estimate a Bernie Sanders-style single-payer system would cost around $32 trillion over a decade, and while that might be less, overall, than the current partially private system, the challenge would be to finance the enormous increase in government spending on health care. Even making generous assumptions, Ms. Ocasio-Cortez’s additional revenue is still not enough to offset the cost. And that doesn’t even include the rest of her platform.

She also made several errors about the details of the federal budget. And while it is not uncommon for elected officials to lack knowledge about the particulars of policy (Mr. Trump, who once declared that the real unemployment rate was 42 percent, is no one’s idea of a wonk), both her errors and answers seemed to suggest that finding plausible ways to finance the full cost of her policies is not exactly at the top of her agenda. And if one of the Democrats’ brightest young stars isn’t overly concerned about basic budget math, it’s hardly a stretch to imagine that much of the rest of the party will follow. Indeed, there is already a movement within liberal policy circles arguing that debt and deficits are far less important than most lawmakers have assumed.

One can perhaps imagine a Republican Party that could defend conventional notions of fiscal responsibility with some semblance of integrity, a conservative movement that governed according to its professed principles; even some deficit doves might find such a party useful as a pragmatic counterweight to progressive ambitions.

But although Republicans will surely attack the new class of Democratic Socialists and their policies as debt-increasing budget busters — that is, after all, what Republicans do — their own actions will ensure that those criticisms have no real authority. Their opposition to the socialist agenda will be hollow, because they helped make that agenda possible."