South Korea’s Strategy to Bring Peace to the Peninsula: Credit Trump | The Diplomat 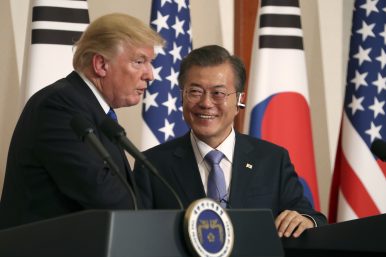 "... The South Korean government learned quickly during the Olympics that Trump enjoys flattery, most likely because Trump told Moon as much. Trump was quick to tout his role in Olympic diplomacy right away, bragging about his role in early January via Twitter. And Trump has continued, and continued, and continued to boast about the South Korean government’s comments. Trump has also not been shy in taking credit for the advances in inter-Korean relations before and after the summit last week.

Watching Trump swoon at the blatant smooth talk of its diplomats, the Moon administration has clearly decided it is worth sharing the limelight with the attention-happy Trump if it means achieving its goals in terms of talks towards denuclearization and a peace treaty with North Korea. The “give Trump credit” campaign has assisted the South Korean government in three respects.

First, giving Trump credit for the inter-Korean summit talks, and previously for the success of the Olympics, ties Trump to the fate of diplomacy. Moon watched two previous inter-Korean summits amount to very little as the Bush administration remained unwilling to engage North Korea directly. And only a few months ago the Trump administration was considering a so-called “bloody nose” preemptive strike on North Korea, with the preference for this policy being strong enough to warrant dropping Victor Cha as the administration’s nominee for the South Korea ambassadorship due to his opposition to the strike. If Moon’s inter-Korean summit was going to succeed, he recognized that he must provide the U.S. with a stake in the negotiations. And Moon found the perfect opportunity to do so by tying Trump’s ego to diplomacy with North Korea. Trump has been forced to table a preemptive strike in so small part because the South Korean government has been willing to say that Trump is responsible for the peaceful diplomatic talks that are underway. In other words, as long as North Korea keeps its end of the bargain, Trump must play the “peacemaker” role whether he likes it or not.

Second, it allows the South Korean government to remain in the driver’s seat of diplomacy with North Korea. The South Korean government was able to steer Trump into a path of summits and talks, and Trump continues to garner all the benefits of inter-Korean diplomacy thus far without truly lifting a finger. Since helping Trump do an about-face on North Korea policy, Moon and his lieutenants have remained out in front of the U.S., directing the traffic in Northeast Asia by suggesting a variety of multilateral summits and offering to broker meetings between North Korea and others. And at each stage the South Korean government is keen to look back and thank Trump before moving on to the next stage. The U.S. remains on the sidelines to such a degree that Moon is having to remind his constituents that the U.S. must be included in a peace treaty with North Korea.

Finally, the “give Trump credit” strategy by the South Korean government is helping provide the domestic political capital Trump will need if he is going to make a deal with Kim Jong-un. Trump’s political base was on board with the “bloody nose” strike just months ago; a Gallup poll in September 2017 found that 82 percent of Republicans supported a strike on North Korea if the U.S. could not achieve its goals peacefully. Crediting Trump also takes on greater importance if we consider that a Pew Research Center poll from November 2017 found that almost half of Americans (46 percent) do not trust Trump at all when it comes to North Korea policy. The willingness of the South Korean government to give Trump credit makes Trump’s North Korea policy appear successful domestically and is allowing Trump to claim to have been successful where so many previous U.S. presidents failed, an important campaign slogan ahead of the November 2018 midterm elections. Trump’s base and the U.S. media are eating up what South Korean diplomats have to offer as well, boosting Trump’s image in the midst of various scandals.

The Moon administration’s “give Trump credit” campaign has proved quite successful so far. The South Korean government has coaxed the Trump administration into doing a 180 in North Korea policy, continues to steer the flow of diplomacy with North Korea, and has even gotten Trump’s supporters to buy-in with the chants of “Nobel” ringing at Trump’s most recent rally. Moon’s willingness to share the spotlight has locked Trump into negotiating with North Korea for at least the next several months. While there are various opinions about whether or not these talks will produce any real outcome, at least for now the Moon administration has succeeded in giving peace a chance by sharing the credit with Trump.

Benjamin A. Engel is a Researcher at the Institute for Peace and Unification Studies at Seoul National University. He is also a Ph.D. candidate in East Asian Studies at Seoul National University’s Graduate School of International Studies and holds an MA in Korean Studies from the same school. His research interests include modern Korean history, democratization in East Asia, and U.S. foreign policy."