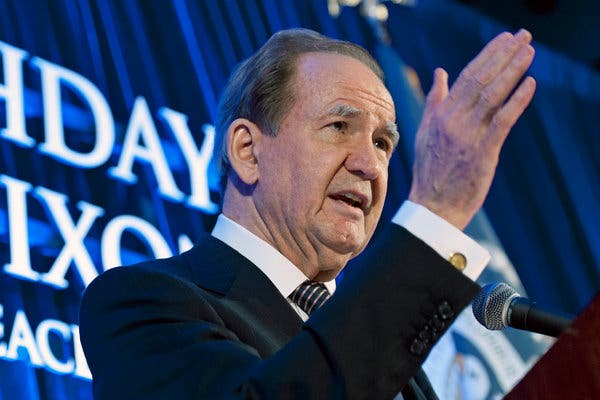 This is the fear that White liberals have a tremendous difficulty facing and what makes their strategies for dealing with Trumpism doomed for failure.

"Last week Pat Buchanan was on “The Laura Ingraham Show” to discuss the humanitarian crisis Donald Trump has created at the border by ripping children away from their parents.

He was not particularly sympathetic to these families’ plights, instead choosing to focus on the demographic danger facing whiteness: “This is the great issue of our time. And, the real question is whether Europe has the will and the capacity, and America has the capacity to halt the invasion of the countries until they change the character — political, social, racial, ethnic — character of the country entirely.”

He continued: “You cannot stop these sentiments of people who want to live together with their own and they want their borders protected.” Make no mistake here, Buchanan is talking about protecting white dominance, white culture, white majorities and white power.

A few days earlier on his blog, he expanded on this point: “The existential question, however, thus remains: How does the West, America included, stop the flood tide of migrants before it alters forever the political and demographic character of our nations and our civilization?”

[Receive arguments and opinions on the pressing social issues and hidden stories around the World Cup right in your inbox. Sign up for Offsides.]

In describing Western liberals’ aversions to instituting racist, xenophobic immigration policies, he wrote: “We are truly dealing here with an ideology of Western suicide.” He ended with this: “Trump may be on the wrong side politically and emotionally of this issue of separating migrant kids from their parents. But on the mega-issue — the Third World invasion of the West — he is riding the great wave of the future, if the West is to have a future.”

Strip all the other rationales away from this draconian immigration policy. This is at the core: White extinction anxiety, white displacement anxiety, white minority anxiety. This is the fear and anxiety Trump is playing to. Politico Magazine dubbed Trump “Pat Buchanan With Better Timing.”

White people have been the majority of people considered United States citizens since this country was founded, but that period is rapidly drawing to a close.

“First, for the first time since the Census Bureau has released these annual statistics, they show an absolute decline in the nation’s white non-Hispanic population — accelerating a phenomenon that was not projected to occur until the next decade.”

The report continued: “Second, the new numbers show that for the first time there are more children who are minorities than who are white, at every age from zero to nine. This means we are on the cusp of seeing the first minority white generation, born in 2007 and later, which perhaps we can dub Generation ‘Z-Plus.’”

The Applied Population Lab at the University of Wisconsin-Madison also issued a report last week that pointed out: “In 2016, more non-Hispanic whites died than were born in twenty-six states; more than at any time in U.S. history. Some 179 million residents or roughly 56 percent of the U.S. population, lived in these 26 states.”

The report also noted that, “When births fail to keep pace with deaths, a region is said to have a ‘natural decrease’ in population,” and that: “A finding from previous research on natural decrease, which is consistent with our findings, is that once an area begins to experience natural decrease, the trend is likely to continue. Only California, New Mexico, and West Virginia have experienced natural increase after the initial onset of decrease, and in each case it was only for a year.”

This is happening. America will soon be a majority-minority country.

White America is growing older, there are fewer white women of childbearing age, and the white fertility rate is lower than that of Hispanics and blacks.

All manner of current policy grows out of this panic over loss of privilege and power: immigration policy, voter suppression, Trump economic isolationist impulses, his contempt for people from Haiti and Africa, the Muslim ban, his rage over Black Lives Matter and social justice protests. Everything.

Trump is president and is beloved by his base in part because he is unapologetically defending whiteness from anything that threatens it, or at least that’s the image he wants to project. It is no more complicated than that. These immigrant children crying out for their mothers and fathers are collateral damage, pawns in a political battle to wring strict legislation out of Congress — medieval torture displays meant to serve as deterrents.

As Buchanan wrote in his book, “Suicide of a Superpower,” which got him fired from MSNBC because of its racist overtones: “White America is an endangered species.” And he chided any white person who might cheer this nation’s changing demographics:

“Ethnomasochism, the taking of pleasure in the dispossession of one’s own ethnic group, is a disease of the heart that never afflicted the America of Andrew Jackson, Theodore Roosevelt, or Dwight Eisenhower. It comes out of what James Burnham called an ‘ideology of Western suicide,’ a belief system that provides a morphine drip for people who have come to accept the inevitability of their departure from history.”

These immigration policies are for people who conflated America with whiteness, and therefore a loss of white primacy becomes a loss of American identity."