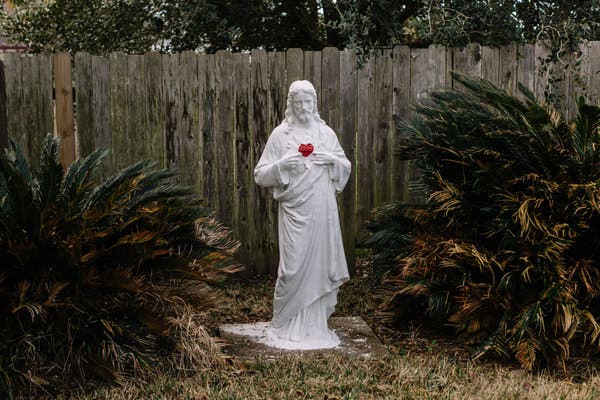 By Stephen T. Asma
Mr. Asma is a professor of philosophy.
"It’s a tough time to defend religion. Respect for it has diminished in almost every corner of modern life — not just among atheists and intellectuals, but among the wider public, too. And the next generation of young people looks likely to be the most religiously unaffiliated demographic in recent memory.

There are good reasons for this discontent: continued revelations of abuse by priests and clerics, jihad campaigns against “infidels” and homegrown Christian hostility toward diversity and secular culture. This convergence of bad behavior and bad press has led many to echo the evolutionary biologist E. O. Wilson’s claim that “for the sake of human progress, the best thing we could possibly do would be to diminish, to the point of eliminating, religious faiths.”

Despite the very real problems with religion — and my own historical skepticism toward it — I don’t subscribe to that view. I would like to argue here, in fact, that we still need religion. Perhaps a story is a good way to begin.

One day, after pompously lecturing a class of undergraduates about the incoherence of monotheism, I was approached by a shy student. He nervously stuttered through a heartbreaking story, one that slowly unraveled my own convictions and assumptions about religion.

Five years ago, he explained, his older teenage brother had been brutally stabbed to death, viciously attacked and mutilated by a perpetrator who was never caught. My student, his mother and his sister were shattered. His mother suffered a mental breakdown soon afterward and would have been institutionalized if not for the fact that she expected to see her slain son again, to be reunited with him in the afterlife where she was certain his body would be made whole. These bolstering beliefs, along with the church rituals she engaged in after her son’s murder, dragged her back from the brink of debilitating sorrow, and gave her the strength to continue raising her other two children — my student and his sister.

To the typical atheist, all this looks irrational, and therefore unacceptable. Beliefs, we are told, must be aligned with evidence, not mere yearning. Without rational standards, like those entrenched in science, we will all slouch toward chaos and end up in pre-Enlightenment darkness.

The human brain is a kludge of different operating systems: the ancient reptilian brain (motor functions, fight-or-flight instincts), the limbic or mammalian brain (emotions) and the more recently evolved neocortex (rationality). Religion irritates the rational brain because it trades in magical thinking and no proof, but it nourishes the emotional brain because it calms fears, answers to yearnings and strengthens feelings of loyalty.

According to prominent neuroscientists like Jaak Panksepp, Antonio Damasio and Kent Berridge, as well as neuropsychoanalysts like Mark Solms, our minds are motivated primarily by ancient emotional systems, like fear, rage, lust, love and grief. These forces are adaptive and help us survive if they are managed properly — that is if they are made strong enough to accomplish goals of survival, but not so strong as to overpower us and lead to neuroses and maladaptive behavior.

My claim is that religion can provide direct access to this emotional life in ways that science does not. Yes, science can give us emotional feelings of wonder at the majesty of nature, but there are many forms of human suffering that are beyond the reach of any scientific alleviation. Different emotional stresses require different kinds of rescue. Unlike previous secular tributes to religion that praise its ethical and civilizing function, I think we need religion because it is a road-tested form of emotional management.

Of course, there is a well-documented dark side to spiritual emotions. Religious emotional life tilts toward the melodramatic. Religion still trades readily in good-and-evil narratives, and it gives purchase to testosterone-fueled revenge fantasies and aggression. While this sort of zealotry is undeniably dangerous, most religion is actually helpful to the average family struggling to eke out a living in trying times.

Religious rituals, for example, surround the bereaved person with our most important resource — other people. Even more than other mammals, humans are extremely dependent on others — not just for acquiring resources and skills, but for feeling well. And feeling well is more important than thinking well for my survival.

Religious practice is a form of social interaction that can improve psychological health. When you’ve lost a loved one, religion provides a therapeutic framework of rituals and beliefs that produce the oxytocin, internal opioids, dopamine and other positive affects that can help with coping and surviving. Beliefs play a role, but they are not the primary mechanisms for delivering such therapeutic power. Instead, religious practice (rituals, devotional activities, songs, prayer and story) manage our emotions, giving us opportunities to express care for each other in grief, providing us with the alleviation of stress and anxiety, or giving us direction and an outlet for rage.

Atheists like Richard Dawkins, E. O. Wilson and Sam Harris, are evaluating religion at the neocortical level — their criteria for assessing it is the rational scientific method. I agree with them that religion fails miserably at the bar of rational validity, but we’re at the wrong bar. The older reptilian brain, built by natural selection for solving survival challenges, was not built for rationality. Emotions like fear, love, rage — even hope or anticipation — were selected for because they helped early mammals flourish. In many cases, emotions offer quicker ways to solve problems than deliberative cognition.

For us humans, the interesting issue is how the old animal operating system interacts with the new operating system of cognition. How do our feelings and our thoughts blend together to compose our mental lives and our behaviors? The neuroscientist Antonio Damasio has shown that emotions saturate even the seemingly pure information-processing aspects of rational deliberation. So something complicated is happening when my student’s mother remembers and projects her deceased son, and embeds him in a religious narrative that helps her soldier on.

No amount of scientific explanation or sociopolitical theorizing is going to console the mother of the stabbed boy. Bill Nye the Science Guy and Neil deGrasse Tyson will not be much help, should they decide to drop over and explain the physiology of suffering and the sociology of crime. But the magical thinking that she is going to see her murdered son again, along with the hugs from and songs with fellow parishioners, can sustain her. If this emotionally grounded hope gives her the energy and vitality to continue caring for her other children, it can do the same for others. And we can see why religion persists.

Those of us in the secular world who critique such emotional responses and strategies with the refrain, “But is it true?” are missing the point. Most religious beliefs are not true. But here’s the crux. The emotional brain doesn’t care. It doesn’t operate on the grounds of true and false. Emotions are not true or false. Even a terrible fear inside a dream is still a terrible fear. This means that the criteria for measuring a healthy theory are not the criteria for measuring a healthy emotion. Unlike a healthy theory, which must correspond with empirical facts, a healthy emotion is one that contributes to neurochemical homeostasis or other affective states that promote biological flourishing.

Finally, we need a word or two about opiates. The modern condemnation of religion has followed the Marxian rebuke that religion is an opiate administered indirectly by state power in order to secure a docile populace — one that accepts poverty and political powerlessness, in hopes of posthumous supernatural rewards. “Religion is the sigh of the oppressed creature,” Marx claimed, “the heart of a heartless world, and the soul of soulless conditions. It is the opium of the people.”

Marx, Mao and even Malcolm X leveled this critique against traditional religion, and the critique lives on as a disdainful last insult to be hurled at the believer. I hurled it myself many times, thinking that it was a decisive weapon. In recent years, however, I’ve changed my mind about this criticism.

First, religion is energizing as often as it is anesthetizing. As often as it numbs or sedates, religion also riles up and invigorates the believer. This animating quality of religion can make it more hazardous to the state than it is tranquilizing, and it also inspires a lot of altruistic philanthropy.

Second, what’s so bad about pain relief anyway? If my view of religion is primarily therapeutic, I can hardly despair when some of that therapy takes the form of palliative pain management. If atheists think it’s enough to dismiss the believer on the grounds that he should never buffer the pains of life, then I’ll assume the atheist has no recourse to any pain management in his own life. In which case, I envy his remarkably good fortune.

For the rest of us, there is aspirin, alcohol, religion, hobbies, work, love, friendship. After all, opioids — like endorphins — are innate chemical ingredients in the human brain and body, and they evolved, in part, to occasionally relieve the organism from misery. Freud, in his “Civilization and Its Discontents,” quotes the well-known phrase, “He who has cares, has brandy too.”

We need a more clear-eyed appreciation of the role of cultural analgesics. It is not enough to dismiss religion on the grounds of some puritanical moral judgment about the weakness of the devotee. Religion is the most powerful cultural response to the universal emotional life that connects us all.

Stephen Asma is a professor of philosophy at Columbia College Chicago, and the author of the forthcoming, “Why We Need Religion.”

Now in print: “Modern Ethics in 77 Arguments,” and “The Stone Reader: Modern Philosophy in 133 Arguments,” with essays from the series, edited by Peter Catapano and Simon Critchley, published by Liveright Books.

Opinion | What Religion Gives Us (That Science Can’t) - The New York Times
Posted by John H Armwood II at 11:57 PM