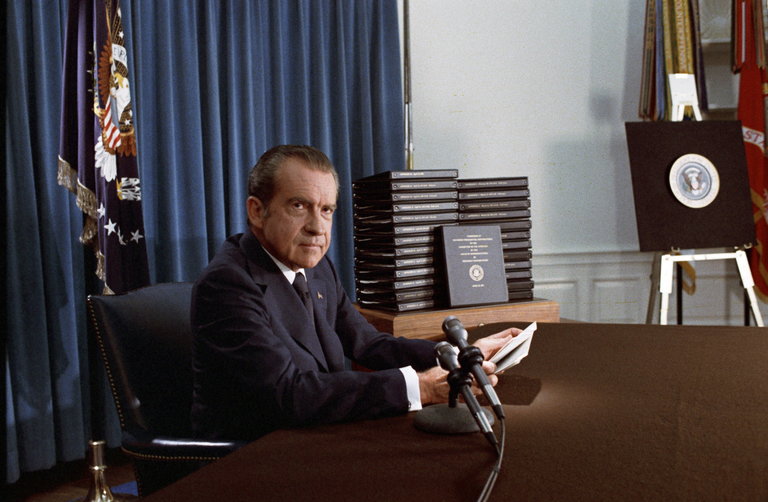 "The president attacked the investigation into his wrongdoing at the most inappropriate of places and in the most indecorous of ways, saying:

“Let others spend their time dealing with the murky, small, unimportant, vicious little things. We have spent our time and will spend our time building a better world.”

Moments later, he came back to his grievances, saying that the nation should “not let ourselves be remembered only for the petty, little, indecent things that seem to obsess us at a time when the world is going by.”

That could well have been Donald Trump, but it’s not. You can tell by the complexity of syntax and the absence of nicknames, charges of “fake news” and the guilt-triggered repetition of “there was no collusion.”

No, the person speaking was Richard Nixon in 1973 at a dinner for the Japanese premier. It was at the height of the Watergate investigation. Nixon, like Trump, was trying to minimize the import of the investigation and to cast it as a personal, “vicious,” and “petty” attack. It wasn’t.

Indeed, the parallels between Trump now and Nixon then are extraordinary.

As revelations of wrongdoing multiplied, many Republican senators continued to try to protect and console Nixon.

Nixon’s hostility toward the press grew, and the press was emboldened by his aggression. As one reporter then told The Times, “The President has declared war, and the war is on.”

Nixon was fighting — and losing — his battle to keep secret White House tapes from being released. The very real possibility of a constitutional crisis loomed as Nixon signaled a desire to defy the courts on the matter, offering instead a written summary of the tapes.

Watergate special prosecutor Archibald Cox rejected the compromise and insisted that he would return to court to compel the release of the tapes.

Feeling increasingly cornered and desperate, Nixon did the unthinkable in October of 1973: He ordered the firing of Cox and the abolition of Cox’s office in what would become known as the “Saturday Night Massacre.”

On July 24, 1974, the Supreme Court ordered Nixon to turn over the tapes. In less than a week after the tapes’ release, the House Judiciary Committee approved three articles of impeachment: obstruction of justice, abuse of power and contempt of Congress.

But, the actual language here is instructive. In Article I, the committee found that Nixon had “prevented, obstructed, and impeded the administration of justice.”

In Article II, it found that he had “repeatedly engaged in conduct violating the constitutional rights of citizens, impairing the due and proper administration of justice and the conduct of lawful inquiries, or contravening the laws governing agencies of the executive branch and the purpose of these agencies.”

And, in Article III, it found Nixon had “failed without lawful cause or excuse to produce papers and things as directed by duly authorized subpoenas issued by the Committee on the Judiciary of the House of Representatives,” concluding that “In all of this, Richard M. Nixon has acted in a manner contrary to his trust as President and subversive of constitutional government, to the great prejudice of the cause of law and justice, and to the manifest injury of the people of the United States.”

It is hard to read all of this, based simply on what is publicly known and excluding what special counsel Robert Mueller may know, without concluding that we are already in the territory where a case for impeachment can credibly be made.

Of course, these are different times.

The Republican Party is so infected with Trumpism, so fevered in its defense of him, so completely compromised by its alignment with him, that its members are not placing the well-being of the nation and fidelity to the Constitution first and foremost.

But even during the Nixon presidency, Republicans didn’t feel compelled to act until they were jolted out of inaction by the unassailable proof of Nixon’s voice on tape.

It is not clear even that would move today’s Republicans. Trump has already been caught on tape bragging about sexually assaulting women. He was still elected, and now congressional leaders grovel at his feet and laud his leadership.

We now see Trump trying to portray an air of confidence and control, but being betrayed at every turn by his own actions, which reveal a panicked man looking to purge anyone conducting an honest investigation.

The Times’s report last week that Trump wanted to fire Mueller only underscores this. That move would have brought us right back to Nixon’s firing of Cox.

This is no longer about Trump alone. This is now an indictment of the entire Republican Party — the elected officials and the still strident Trump voters — as well as the Trump propaganda machine at Fox News (“news” clearly being a misnomer).

This inches us further away from democracy and closer to despotism. Might as well call a thing a thing."