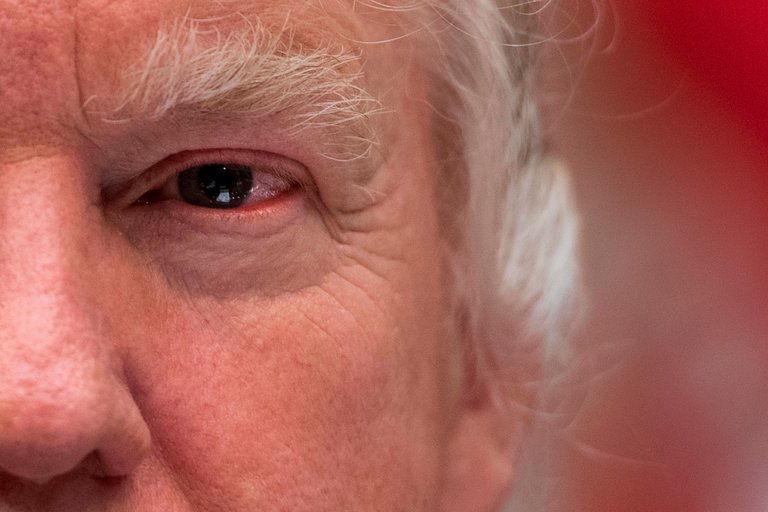 "Donald Trump has turned the political world upside down, again and again, like a kid flipping a coin. Every day we wake up to either a new scandal or several lingering ones.

It is astounding. It is maddening. It is numbing.

He is also embroiled in a scandal over why a top aide, Rob Porter, accused of physically assaulting his two ex-wives, was allowed to remain on the White House staff even after these allegations had been brought to the attention of the White House by the F.B.I.

Exacerbating this scandal is the fact that the official White House timeline about the events leading to Porter’s resignation turned out to be a lie, according to sworn testimony on Tuesday by the F.B.I. director Christopher Wray. It is also exacerbated by the fact that after Porter resigned, Trump praised him, and initially failed to say anything about domestic violence in general, reserving that condemnation for a week later, when he said, “I’m totally opposed to domestic violence of any kind.”

And of course, there is the omnipresent issue of Russia attacking our elections in 2016 and the investigation into whether anyone in the Trump orbit colluded or cooperated with the Russians, conspired to commit a crime, lied to officers or tried to obstruct justice.

That’s just the big three at the moment. We also mustn’t forget that the president has never released his tax returns, he refused to sever ties with his businesses, and he is burning through our money going to golf courses or his properties with decadent regularity. He also defended Nazis and was disrespectful to the hurricane-ravaged people of Puerto Rico.

And Trump has lied about pretty much everything. As The Washington Post reported in November: “In the past 35 days, Trump has averaged an astonishing nine [false or misleading] claims a day. The total now stands at 1,628 claims in 298 days, or an average of 5.5 claims a day.”

Any of this would have crippled another president, but not Trump. In a perverse way, Trump appears to benefit from the sheer volume of his offenses. They overwhelm many Americans’ ability to process and track, maintain outrage or even fact-check.

This may rightfully be called Trump’s Deluge Doctrine of American Politics, a thing that many of us never properly feared because we never thought it possible. We never thought a man of such moral depravity and such little respect for propriety, protocol and honesty would ever be president.

But the storm is upon us; we are in it.

I must continue to submit that although I disagree vociferously with Trump on policy, my objection here isn’t about policy or partisanship. This is a fight for the soul of the country.

When more than a third of the country — among them many who once considered themselves part of the “moral majority” — stand with a man who is the literal antithesis of all the values they once professed, that is a problem for America. They are no longer interested in the health of the democracy. Their mission and objectives have veered into a dark place where vision is short and risks and dangers are multiple.

I know that it is a fool’s errand to try to convince these people that honesty, valor and character are fundamental requirements of the American presidency, and when they are lost from the office, the country itself is in peril.

As Trump himself said during the campaign, “I could stand in the middle of Fifth Avenue and shoot somebody and I wouldn’t lose voters.” The enduring truth of that outrageous claim is a permanent stain that his supporters must carry.

These people are not only hypocrites; they are au pairs to his obscenity.

Who else would they have allowed to refuse to sufficiently acknowledge that the country had been attacked, with profound consequences and continued threat, by another country?

“There should be no doubt that Russia perceived that its past efforts as successful and views the 2018 U.S. midterm elections as a potential target for Russian midterm operations.”

“We need to inform the American public that this is real, that this is going to be happening, and the resilience needed for us to stand up and say we’re not going to allow some Russian to tell us how to vote, how we ought to run our country.”

But Wray testified at the same hearing that he had never been “specifically directed by the president” to prevent Russia from interfering in our elections.

That is a jaw-dropping statement. As the Harvard professor of constitutional law Laurence H. Tribe wrote on Twitter:

“F.B.I. director Wray just testified in the Senate that — despite Russia’s ongoing intrusions into our electoral systems — Potus has never charged the F.B.I. with protecting U.S. elections from Russia! Let that sink in. That’d be like F.D.R. doing nothing in response to Pearl Harbor.”

Let me be clear: Any president who refuses to protect Americans from a foreign threat is himself a domestic threat.

America, what is left of it, is slipping away a little bit more every day, with a blessing and a wave from the truculent Trump supporters who simply get giddy whenever liberals lament.

This is the politics of the petty, where people dance and shout as the republic burns.