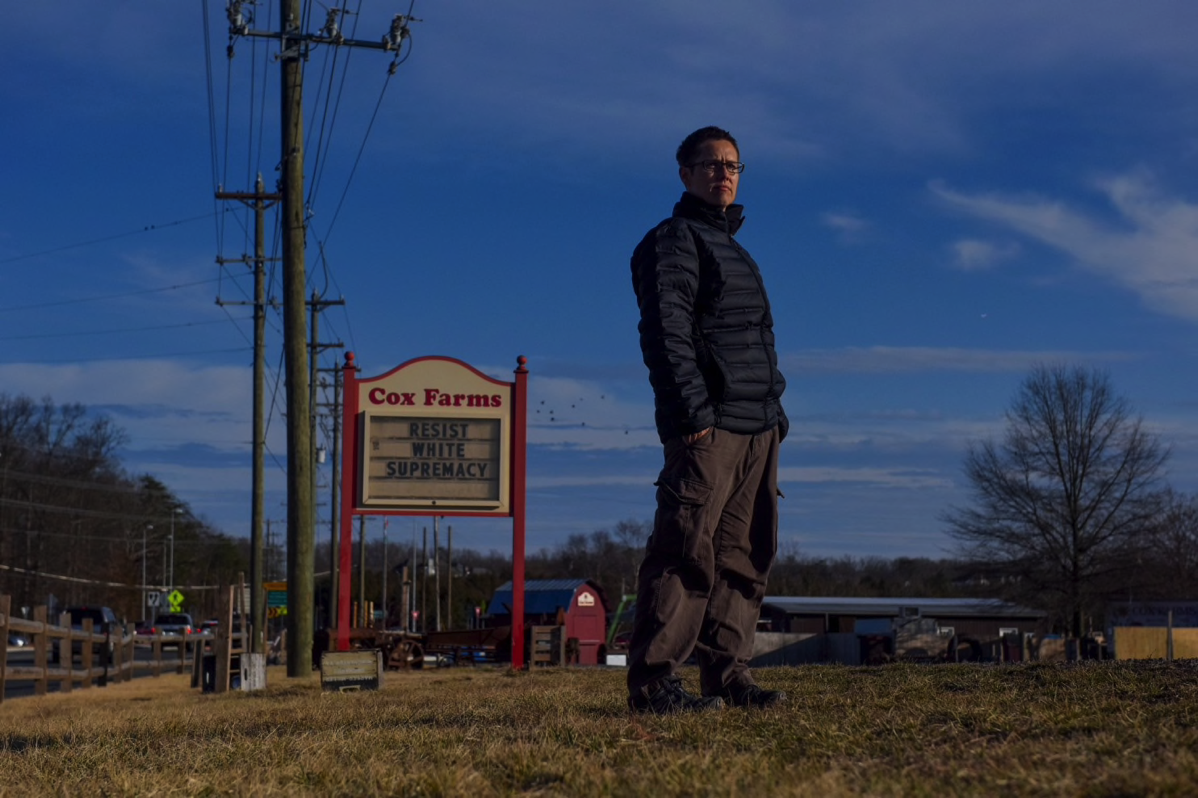 "It had been a week since the road sign had gone up near the entrance of their 116-acre farm in Northern Virginia, and the furious emails, calls and Facebook messages were still pouring in. The responses didn’t surprise the owners of Cox Farms, who had long taken politically charged stands on their land, locally famous for its massive fall festival. In 2015, a Black Lives Matter poster led a local police union to call for a boycott of their hay rides and pumpkin patches, and last year, a pair of signs — “We Love Our Muslim Neighbors” and “Immigrants Make America Great!” — sparked some backlash.

But their latest — “Rise & Resist” — had triggered a particularly angry reaction last week from conservatives who had seen a photo of it online and viewed the slogan as an attack on President Trump. So Aaron Cox-Leow, who runs the operations side of the 46-year-old business in Centreville, started thinking of some new language that everyone could agree on. Almost six months to the day since neo-Nazis and white nationalists marched through Charlottesville with torches, Aaron’s sister had an idea.

“Maybe we should change ‘rise and resist’ to ‘resist white supremacy’...,” Lily Cox-Richard texted her. “That way, if someone takes a picture of one of our signs to post and says they are ‘saddened’ or ‘disappointed,’ they will be explicitly revealing themselves as the racist that they are.”
“Yeah,” Aaron responded, “that sounds good.”

On Friday afternoon, down came “Rise & Resist” and up went “Resist White Supremacy.” About an hour later, a message from a woman named Rebecca, whose Facebook profile was an image that read “TEAM USA,” popped up in Cox Farm’s Facebook Messenger inbox: “Whatever your own personal agendas are none us want to see them on display at a place we once enjoyed going to for tradition. It’s TRULY disappointing.”
The vitriol only intensified in the hours that followed, which baffled Aaron. Who, other than a white supremacist, would be offended by a message condemning white supremacy? She also understood, though, that this is America in 2018, a time of such fierce division that even voicing opposition to the ugliest beliefs could be twisted or taken out of context.

On Saturday — in a Facebook post that has drawn more than 43,000 reactions and nearly 15,000 shares — she addressed the furor.
“Our little roadside signs have power,” Aaron, 36, began, before explaining why they sometimes shared their opinions. “Cox Farms is a small family-owned and family-operated business. The five of us are not just business-owners; we are human beings, members of the community, and concerned citizens of this country. We are also a family, and our shared values and principles are central to our business.”

Aaron’s father and his brother, whom she described as hippies, started Cox Farms on a 40-acre plot near Herndon in 1972. Even in those early days, she heard later, people were sometimes offended by the family’s signs, although those were often just off-color plays on their last name (this story’s author, by the way, is not related to the farmers). Eventually, her dad and mom took over and the business evolved, moved, expanded.

Their first experience with real controversy came in 2000 when conservative activists accused the farm of promoting gay rights because of two rainbow flags that flew over tunnels made of hay. The flags hadn’t been bought for that reason, but Aaron’s parents, Gina and Eric, learned what they symbolized and embraced the idea. Aaron, a lesbian, had come out to them five years before the upheaval.
“At some point it looked like we could be facing a significant impact on our business,” Aaron recalled, but the family didn’t flinch, and instead rallied supporters to their cause.

“It was a record-breaking season,” she said. “By far the best we’d ever had.”
Aaron, whose partner is of mixed race, also didn’t back down after the threat of a boycott three years ago over the Black Lives Matter poster she put in a window of their home, which stands in the middle of the sprawling property.

“We’re not seeking to alienate folks who have different perspectives on tax reform or infrastructure spending,” Aaron said in her recent Facebook post. “But when it comes to speaking out against systems of oppression and injustice, we see it as our moral responsibility to use our position of privilege and power, along with the tools of our trade and the platforms available to us, to engage visibly and actively in the fight for justice. Our roadside sign messages are one small way we do this.”

Her post went viral, spreading rapidly online among both right- and left-leaning groups, who then descended on the farm’s Facebook page to give either one- or five-star reviews that had nothing to do with kettle corn or apple-cider doughnuts.

For Aaron, though, the blowback presented an opportunity. To change people’s minds, even by just a degree or two, required communication that was respectful but honest. And here was a chance to talk to people who disagreed with her — lots of them.

“Resist white supremacy is not an inclusive message,” complained Patty Weston Meizlish, who lives in Louisa, Va. “When you single out a group of people you exclude them. This is a sad message.”

“Yes, generally speaking, we are comfortable excluding white supremacists,” responded Aaron, who studied psychology at Smith College in Massachusetts. “If you know some who would be interested in dialoguing with us, please have them contact us!”
Shannon Lee Sibley, from nearby Ashburn, contended that she also supported fighting hate groups but wouldn’t spend her money at the farm because it would never post a “Blue Lives matter” sign in support of police.

“You’re right, Shannon — we do not support ‘Blue Lives Matter.’ . . . police lives are already and by default valued in our society,” she wrote. “Black lives are not, so we believe that a declaration that Black Lives Matter is necessary and important.”

“So black supremacy is okay then?” asked Lisa Lewis. “This is not a message of love, this is a message out to divide people even more. I would never ever visit your farm because you try to force your views on your customers. That is WRONG no matter what you say.”
“Lisa, when we talk about white supremacy, we’re referring to a systemic racism that is much deeper and more pervasive than any individual or group could be,” Aaron replied. “Black people do not have the institutional power in our society to benefit from so-called ‘black supremacy.’ It just doesn’t work like that.”

Cars pass the sign at the edge of Cox Farms that has generated so much backlash online.Photo by: Jahi Chikwendiu/The Washington Post
On Monday, Aaron wrote a follow-up post, thanking the thousands of people who had offered support (and who vastly outnumbered the critics). She dismissed the idea, though, that what the farm had done — making a statement that could potentially harm its business — was in any way “brave.” She pointed instead to dozens of immigrant “dreamers” who had demonstrated against the threat of deportation at the U.S. Capitol; to Chris Newman, who has written about race and the challenges of farming in Virginia as a black man; to Eric Trammel, who as a sophomore at Centreville High School was kicked out of class when he refused to stand for the Pledge of Allegiance as a form of protest.

“We are white people using our privilege and power to say something that should be obvious but clearly still needs to be said,” she wrote, “and there’s nothing brave about that.”

Then Aaron published the post, and as it, too, was shared thousands of times, she returned to the day’s business: planning for spring, when the family farm will launch a new event at the corner market featuring pulled pork, live music and root beer floats