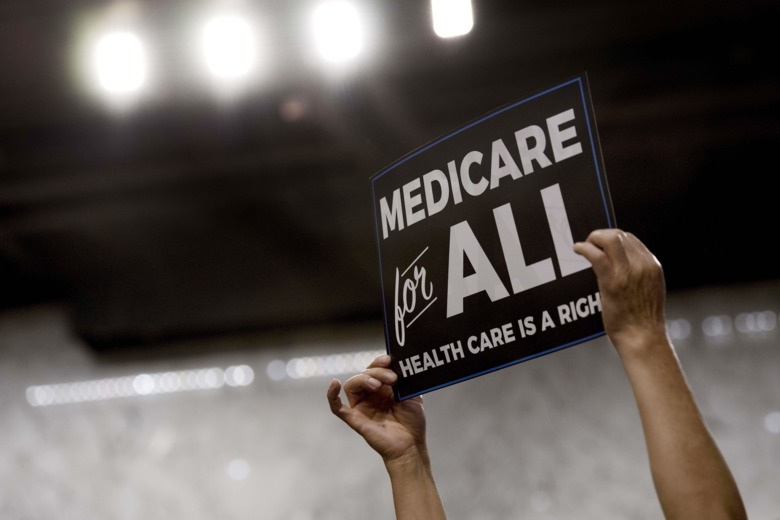 "At this point, it’s fairly clear that any Democrat who wants to run for president in 2020 with support from the party’s progressive base will have to campaign on some sort of plan that they can plausibly call Medicare-for-All.

What, exactly, counts as “Medicare-for-all”? That’s still a bit unsettled. No one serious simply wants to expand the current Medicare program, since it contains some major coverage gaps that today’s seniors are typically stuck filling with private supplemental insurance. When Sen. Bernie Sanders tried to define the term back in December, he proposed a full-fledged single-payer health care system with zero premiums, co-pays, or deductibles. That idea won over more than a dozen co-sponsors, including some other likely 2020 contenders like Sens. Elizabeth Warren and Kirsten Gillibrand.
But many Democrats are still clearly concerned that such a rapid move to true, Canadian-style single-payer would risk a backlash from voters, who’d face new taxes and be forced to give up their employer-based coverage, whether or not they wanted to. Those Democrats, which include a big chunk of the party’s wonk class, are still looking for their own answer to Berniecare.

On Thursday, the Center for American Progress—the D.C. think tank of choice for technocratically inclined establishment Dems—took its stab at an alternative with the introduction of “Medicare Extra. ” While the name sounds like an ironic nod at teen slang, the program itself is an interesting blueprint for gradually nationalizing health care without making skeptical voters feel as if they’re being dragooned into the new system.
Like some of the other ambitious health plans Democrats have floated lately, Medicare Extra looks a lot like a bulked up version of the public option—the government run insurance plan that progressives tried and failed to pass as part of Obamacare. The new program would essentially roll together Medicare, Medicaid, and the Children’s Health Insurance Program into a single system with more generous benefits that all Americans would be eligible to join, with most families having to pay at least some premiums. But traditional Medicare would be left in place for change-averse seniors who want to stick with what they know, and businesses would be allowed to continue offering their employees private coverage as a benefit.
Medicare Extra’s pool of patients would then grow over time. The government would automatically enroll newborns, people turning 65, and the uninsured. After several years, businesses would be allowed buy their employees into the program rather than pay for private insurance. Many would likely jump at that chance in order to save money; Medicare Extra would be designed to keep costs down by paying providers less than private insurers do, with rates set based on an average of what Medicare, Medicaid, and commercial carriers pay today, “minus a percentage.” Eventually, the program would evolve into a more or less national insurance system. Working people wouldn’t necessarily be forced to join it. But most of them would probably want to, or at least would get a nudge from their employer.

Unlike Berniecare, Medicare Extra would not make going to the doctor free for everyone. Conceptually, this is one of the biggest differences between the two plans. Under Medicare Extra, poorer families wouldn’t face any premiums, co-pays, or deductibles. But households making more than 150 percent of the poverty line would. Premiums and out-of-pocket costs would be subsidized on a sliding scale according to income, so that well-off Americans would owe more and needier enrollees would owe less. In this way, the scheme would work much like Obamacare’s exchanges do today. But unlike Obamacare, which stops offering assistance to families with incomes four times above the poverty line, nobody would be required to pay more than 10 percent of their earnings toward the cost of their Medicare Extra premiums.