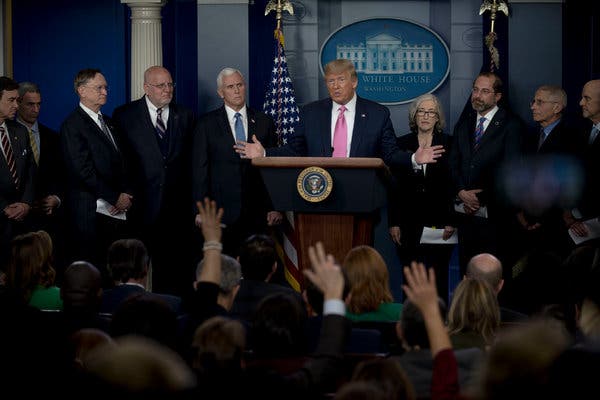 "The president and senior officials manipulated Americans and played down the severity of the pandemic.

Mr. Goodman is a professor at New York University School of Law, where Ms. Schulkin is a student.

The strongest critics of the Trump’s administration’s handling of the coronavirus pandemic point to its flat-footedness and the consequences of time lost.

But the full account looks worse. Over the last five days of February, President Trump and senior officials did something more sinister: They engaged in a cover-up.

A look at this window of time gives insight into how several members of the president’s team were willing to manipulate Americans even when so many lives were at stake.

The recent reports that the president wanted to fire the Centers for Disease Control and Prevention’s top expert on viral respiratory diseases, Dr. Nancy Messonnier, during this period helps put the pieces of the puzzle together.

What was her offense to the president?

In a conference call with reporters on the final Tuesday of the month, Dr. Messonnier spoke frankly. “We want to make sure the American public is prepared,” she said, then put it in personal terms by saying what she told her children that morning: “We as a family ought to be preparing for significant disruption to our lives.”

At the time, senior officials knew the coronavirus was an extreme threat to Americans. Thanks to information streaming in from U.S. intelligence agencies for months, officials reportedly believed that a “cataclysmic” disease could infect 100 million Americans and discussed lockdown plans. The warnings were given to Mr. Trump in his daily brief by the intelligence community; in calls from Alex Azar, the secretary of health; and in memos from his economic adviser Peter Navarro.

The same day that Dr. Messonnier spoke, the military’s National Center for Medical Intelligence raised the warning level inside the government to WATCHCON1, concluding that the coronavirus was imminently likely to develop into a full-blown pandemic.

But the White House did not want the American public to know.

The president’s stated concerns were specific. He didn’t want to upset the markets or China during trade talks, and it appears he may have also simply been in denial, counting on his personal hunches and luck.

So the president’s top advisers took to the airwaves with a united purpose: to deny the truth.

That Tuesday afternoon, Mr. Azar appeared at a news briefing, public health professionals including Dr. Anthony Fauci behind him, and discussed Dr. Messonnier’s comments. “We’re trying to engage in radical transparency with the American public as we go through this,” he declared. But within 20 seconds of that statement, he uttered state propaganda. “Thanks to the president and this team’s aggressive containment efforts,” he said, coronavirus “is contained.”

That same day, Larry Kudlow, the president’s National Economic Council director, in direct response to Dr. Messonnier’s comments, told CNBC: “We have contained this. I won’t say airtight, but pretty close to airtight.”

The following day, Defense Secretary Mark Esper spoke to the military. In a video conference with American commanders around the world, he instructed them to give notice on decisions made about how to protect their personnel from the virus if doing so might “run afoul of President Trump’s messaging,” according to a New York Times report.

(A Pentagon spokesman denied this, and when Mr. Esper later appeared before Congress, he called the article “completely wrong.” Yet as The Hill reported, Mr. Esper “seemed to confirm key details” of the Times report at the hearing by saying he asked for a “heads-up” on such decisions to make sure the administration was “integrated across the interagency” — including the White House.)

That Wednesday, the president used the day’s news conference by the coronavirus task force, with Dr. Fauci alongside him, to lie to the public. “You have 15 people, and the 15 within a couple of days is going to be down to close to zero. That’s a pretty good job we’ve done,” he told the American public. He and Mr. Azar would continue to make such assurances over the next two days — Mr. Azar in remarks before lawmakers and the president in statements from the White House and bellowed at political rallies.

At the end of the five days, Dr. Fauci spoke on the “Today” show in public messaging that would later become controversial. The question was put to him in terms Americans could easily appreciate: “So, Dr. Fauci, it’s Saturday morning in America. People are waking up right now with real concerns about this. They want to go to malls and movies, maybe the gym as well. Should we be changing our habits and, if so, how?” Dr. Fauci offered a nuanced reply: “No. Right now, at this moment, there’s no need to change anything that you’re doing on a day by day basis. Right now the risk is still low.” He added, however, that this could change.

Dr. Fauci might now regret how he tried to thread the needle, but he also knew to expect the question and he repeated the party line.

In effect, for five days, the president along with some of his closest senior officials disseminated an egregiously false message to Americans. The messaging would continue well beyond those days until the stark images of refrigerated morgue trucks and spiked lines on colored graphs showed the escalating numbers of cases and dead.

Understanding this playbook is not only important in its own terms. It goes to the heart of whether Americans can trust this administration in the months ahead when they must make life-or-death decisions about how to protect their health and when to reboot the economy.

Ryan Goodman, editor in chief of Just Security, is a professor at New York University School of Law, where Danielle Schulkin is a third-year student."

Opinion | How Trump and His Team Covered Up the Coronavirus in Five Days - The New York Times
Posted by John H Armwood II at 8:17 AM