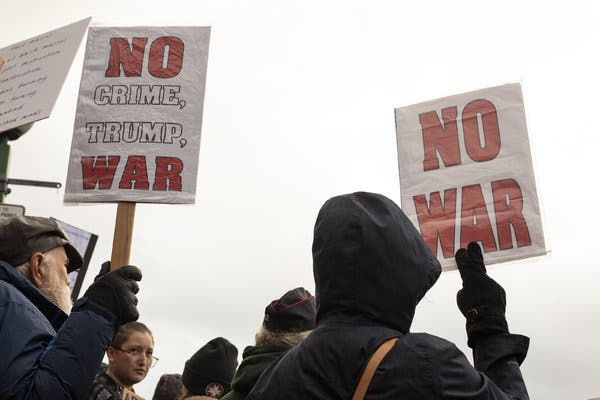 "President Trump must doubt his administration’s own claims that it deterred Iranian threats.

Republican senators are the only people with the power to restrain the president.

“Let this serve as a WARNING that if Iran strikes any Americans, or American assets,” Mr. Trump tweeted on Saturday, “we have targeted 52 Iranian sites (representing the 52 American hostages taken by Iran many years ago), some at a very high level & important to Iran & the Iranian culture, and those targets, and Iran itself, WILL BE HIT VERY FAST AND VERY HARD. The USA wants no more threats!”

Why was Mr. Trump’s threat on Twitter even necessary? Wasn’t the death of General Suleimani supposed to have stopped the threats the president now claims America still faces? Mike Pompeo, the secretary of state, defended the attack on Friday by saying, “It was time to take this action so that we could disrupt this plot, deter further aggression from Qassim Suleimani and the Iranian regime, as well as to attempt to de-escalate the situation.”

Killing General Suleimani seems to have deterred and de-escalated nothing. Otherwise, why would the State Department have needed to advise all Americans to leave Iraq?

(Set aside for the moment that targeting cultural sites is considered a war crime. Mr. Trump, after all, is very forgiving when it comes to Americans who commit war crimes.)

Since the storming of the American embassy in Tehran (and the seizing of the aforementioned 52 hostages) in 1979, the two countries have been in a low-grade or proxy conflict. Since then, General Suleimani spent 22 years at the helm of Iran’s own Quds force as Tehran’s liaison to countless militias, factions and terrorist groups across the Middle East, except for brief moments of calm, such as when General Suleimani offered to help American troops attack his enemy, the Taliban, in the wake of the 9/11 attacks, only to rebuff cooperation after President George W. Bush lumped his nation in with Iraq and North Korea as part of an axis of evil.

Yet there was a reason that past American presidents refrained from assassinating one of the region’s most powerful and, yes, blood-soaked military commanders: Iran’s ability to respond with asymmetric violence.

The regime has turned that stratagem into an art form since the catastrophic war with Iraq during the 1980s, which at times resembled the slaughter at the Somme. General Suleimani saw combat then and learned some of the lessons that guided his doctrine of proxy fighting from Yemen to Lebanon.

By declaring that the United States will respond with airstrikes to any attacks on American targets or assets, Mr. Trump is drawing a bright red line that Iran cannot cross. And yet, Iran relies on a network of proxy actors from Yemen, Syria, Iraq and Lebanon. Must they all respect Mr. Trump’s red line? There are plenty of hotheads in those proxy forces that will be incensed by the assassination, the same way young men with weapons and minimal discipline often are. Even during the Iraq war, which saw the deaths of hundreds of American soldiers from Iranian munitions, keeping proxy militias under control was difficult.

Mr. Trump can’t keep an entire region from crossing his red line, making violent conflict all the more likely if the president holds to it. And Iran itself can respond less directly, but no less effectively, with cyberwarfare, attacking American allies in the region, disrupting trade and undermining the United States in Iraq and elsewhere.

Mr. Trump’s national security staff has thinned out drastically in the past year or so. Seasoned counsel may be either in short supply or given little credence.

What’s even more troubling is that the administration is not seeking sensible advice elsewhere. It didn’t notify leaders from either party in Congress before the drone strike, although on Saturday the White House did notify at least some senior leaders, as required by the War Powers Act.

Lawmakers had expected a public document that would clearly explain — to them and the American public — the reasons for the attack but received a classified one instead.

“The highly unusual decision to classify this document in its entirety compounds our many concerns, and suggests that the Congress and the American people are being left in the dark about our national security,” said Nancy Pelosi, the speaker of the House of Representatives.

Several lawmakers are working on a resolution barring the White House from escalating the conflict without Congressional blessing.

While appropriate, such efforts to rein in executive war-making powers have proved insufficient since the 9/11 attacks. That’s why it is crucial that influential Republican senators like Lindsey Graham, Marco Rubio and Mitch McConnell remind Mr. Trump of his promise to keep America out of foreign quagmires and keep Mr. Trump from stumbling further into war with Iran.

The President has listened to them in the past, and has reason — with his impeachment trial nearing in the Senate — to fear them as well.

The crisis between the United States and Iran has not yet reached a point of no return. Voices of reason can keep it from doing so."